Kick-ins, 30-minute halves and dribbling from free kicks. Why not? 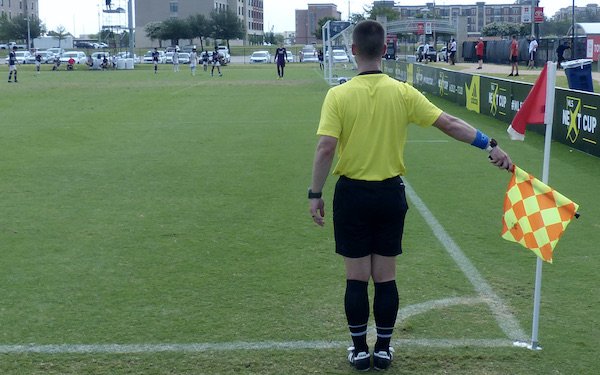 I used to be on our neighborhood pool committee when I lived in the United States. After coaching and refereeing, it was my third-favorite voluntary task. Whenever we newer members of the committee suggested any kind of change, the more long-standing servants would hold their heads in their hands and groan, "Serving beer and wine for adults once or twice a summer during a two-hour window on a Saturday evening? If we do that, it's just going to open up a whole can of worms!"

Soccer fans tend to be just as conservative when it comes to changing its rules. Ever since the North American Soccer League in the 1970s, anyone suggesting legislative ways to improve the game is accused of wanting to 'Americanize' the sport. It's true that the NASL wanted a lot of restrictions lifted to adapt soccer to a U.S. audience in a competitive and already crowded market. It's unfair, though, to blame the U.S. when — half a century later — a lower Dutch league is suggested as the playing field for experimentation. And just because soccer is already a good sport does not mean it can't be improved, wherever in the world it's being played.

The head of Dutch amateur soccer, Dirk van der Zee, earlier this month put forward a series of changes to make the game, in his words, "faster and fairer." None of his ideas are necessarily new — stopping the clock when the ball's out of play (2 x 30 minute halves of 'pure playing time'); 5-minute sin-bins instead of yellow cards; kick-ins instead of throw-ins; being able to dribble the ball from a free kick; and unlimited substitutions. Van der Zee proposed that the changes should be tried out in one of the Netherlands' lower professional leagues, starting next year.

The administrator also correctly pointed out that the biggest resistance to any such changes would come from FIFA and UEFA, the world and European governing bodies. The Dutch federation was not so keen either, and swiftly issued a statement to clarify that the experiment was not going to happen, and they wanted nothing to do with such radicalism. Why, this is just going to open up a whole can of worms!

Yet, aside from unlimited subs (already allowed in many amateur leagues, but surely not necessary at the top of the game now that we have five subs), these ideas are worth a serious look at the very least:

• Two x 30-minute halves. In my piece about time-wasting last month this idea came up over and again in the comments section. The resistance comes simply from the fact that it's never been done before. Except in college soccer, to some extent, and almost every other sport, where a clock kept off the field not only works, but is completely fair. Is college soccer 'americanized'? No, and you don't hear fans on the way out of the stadium complaining how much more enjoyable the game would have been if there had been seven added minutes of injury time. Try it, at least. If the lack of injury time prompts fans in their thousands to stop attending, I'd be very surprised.

• Five-minute sin-bins. Or maybe 10 minutes would be better. Because there's really not much penalty in a yellow card unless it later becomes a yellow-red. True, it might curb the fouling of a dirty player. But why not curb the fouling of a dirty player and have that dirty player off the field for 10 minutes, too? (By the way, this season we've been experimenting with a sin-bin in the German amateur leagues where I ref. Except that the sin-bin only comes between a yellow and a red card, so it's made very little difference to the levels of dissent and foul play. It's effectively a rule in favor of even more lenience toward the foul-mouthed or foul-footed player.)

• Kick-ins to replace throw-ins. Soccer is a game that's best played on the ground, with the feet. Any coach who's had to coach young players how to take throw-ins and how to control throw-ins would probably adore this rule. Kick-ins foster basic soccer skills (if the ball had to be played in along the ground — or, say, not above knee height), and could be carried out much quicker than throw-ins. Throw-ins encourage long ball play, ugly goals and time-wasting. Please, let's give it a try. When coaching, I use it in small-sided practice games all the time.

• Dribbling from free kicks. Of all Van der Zee's suggestions, this is the one I'd most like to see in trial. The advantage should always be with the team that's been fouled, and allowing a player to dribble directly from a free kick would open up a host of attacking options. Let's add dribbling from corner kicks too. And why not from our brand new kick-ins (see above)? Soccer's lack of artistry and individual flair has been a problem since the 1950s, and this might be a way to usher in a new age of foot-oriented play rather than the airborne skulduggery that plagues so many tactical directives from the touchline.

After an extrordinary general meeting to change our by-laws, I pushed through my proposal for alcohol to be occasionally served at adult social events at our neighborhood pool. No one drowned, no one was arrested. No cans of worms were opened, and there were no slippery slopes to hell and damnation. Encouraging fair play and flair play won't kill soccer. Innovations that would be simple to implement are worth a debate and a trial, at the very least.

(Ian Plenderleith's next book 'Reffing Hell: Stuck in the Middle of a Game Gone Wrong' will be published in August, and is available to pre-order direct from Halcyon Publishing in the UK.)

referees
30 comments about "Kick-ins, 30-minute halves and dribbling from free kicks. Why not?".
Read more comments >
Next story loading