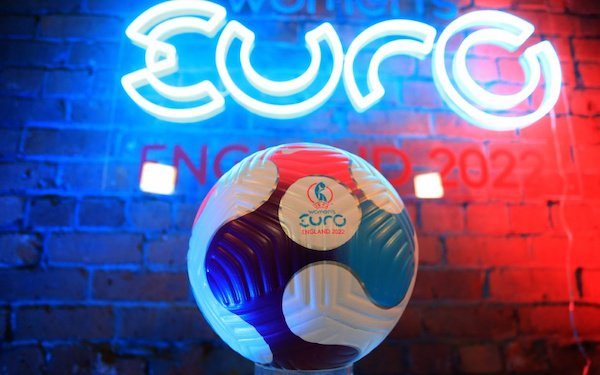 Euro 2022 organizers have hit back at suggestions of a lack of ambition for the women's game over their selection of some small venues for July's tournament in England.

English Football Association chief executive Mark Bullingham even admitted that clubs had to be persuaded into hosting matches.

The Euro will begin and end in front of sell-out crowds at iconic stadiums in Old Trafford and Wembley, respectively.

However, Manchester City's Academy Stadium and Leigh Sports Village will host games with capacities of under 10,000.

Iceland midfielder Sara Bjork Gunnarsdottir criticized some venue choices -- calling the use of the Academy Stadium, which will have a capacity of 4,700, "embarrassing" and "disrespectful".

However, the FA's director of women's football Sue Campbell said there was a balance to strike with still 275,000 tickets left on sale.

Ticket sales have hit 450,000 and are expected to surpass half a million in what will be the best attended women's European Championship ever.

All of England's three group games against Austria, Norway and Northern Ireland have sold out, as well as the final on July 31.

Head of tournament delivery Chris Bryant defended the decision not to play all of England's games at Wembley, like the men's team enjoyed for all their games on home soil at last year's Euro 2020.

However, he did accept that demand for women's sport has increased dramatically since the venues were selected as part of the winning bid in 2018.

"I think we can all be aware the interest in hosting women's sporting events probably wasn't what it is today," said Bryant. "We knew we needed to sell out matches and we really want the idea of matches being sold out to be a good thing as that's what it is, it's an achievement and we're really proud of that. That then shifts demand for people who can't get to an England game to go to other matches where we need the atmosphere and the attendance to support the tournament."

Bullingham said clubs had to be cajoled into hosting the tournament when the tender process began.

"The absolute truth of it is we did a tender process throughout every major ground and city in the country and there were very few that came forward in wanting to host the women’s Euros," he said. "We actually had to persuade a few clubs and cities to come forward so we are very happy with where we got to. We think we have got some brilliant venues. If you think people were knocking our door down to host matches that was not the case."

England open the tournament on July 6 against Austria.

international
9 comments about "Euro 2022 organizers hit back at charges of lack of ambition for women's game".
Read more comments >
Next story loading