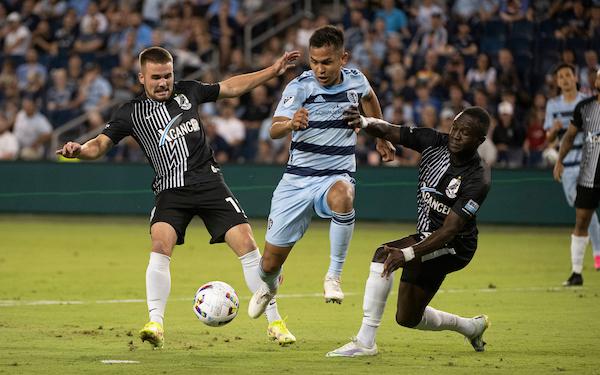 But it was quite a run for the Owls' first appearance in the tournament.

In the third round, the reigning USL League One champions beat MLS's Chicago Fire in a shootout after they tied the match, 2-2, in the second minute of stoppage time. In the round of 16, they beat a second MLS team on the road with a 2-1 comeback win at Minnesota United.

On Wednesday, no comeback was in the cards.

Sporting KC took a 2-0 lead into halftime on goals by Daniel Salloi and Kortne Ford and put the game away with four second-half goals. Felipe Hernandez and Salloi scored twice each while Khiry Shelton added a goal and two assists.

The match at Children's Mercy Park drew 18,552 fans, including a contingent of about 700 Owl supporters who made the three-hour trip down I-29.

Three times, most recently in 2011, Sporting KC has fallen to a lower-division team in the Open Cup quarterfinals, but it never put itself in trouble against Omaha.

"I think the guys were hungry, they were organized and I also believe they gave the effort that they needed to," said Sporting KC coach Peter Vermes, "but they were also disciplined in the game."

Three second-half goals gave the New York Red Bulls a 3-0 win over NYCFC in their first Hudson River Derby in the Open Cup.

Lewis Morgan, Luquinhas and Omir Fernandez scored to send the Red Bulls to the semifinals for the first time since 2017.

NYCFC had Thiago Andrade sent off in the 62nd minute, and both teams had players ejected after the match. Seven cards were also issued.

The Red Bulls also moved into the Open Cup's final four for the sixth time. Their best finishes came in 2003 and 2017 when they fell in the final.