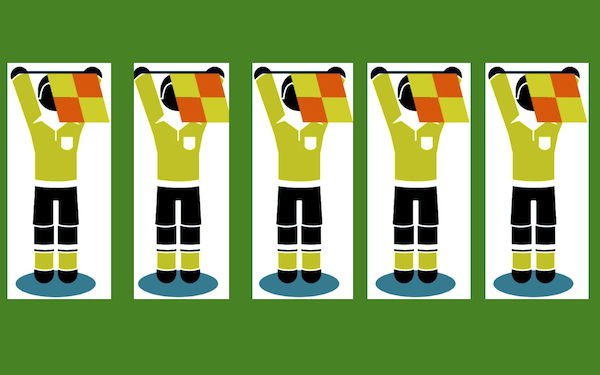 You will remember the famous Anatoliy Puzach  ... No? ... Ukrainian-born forward for Dynamo Kiev and the USSR? Still no?

Oh come on, it’s not that long ago. Just 52 years ago when Puzach was in all the soccer headlines for doing something that had never been done before in soccer. And will never be done again.

OK, I’ll admit that’s a little misleading. Because Puzach didn’t really do anything. He was one of those who, in the bard’s words, had fame “thrust upon him.” Shakespeare called it “greatness,” but that’s much too exalted a word for what happened to Puzach.

Which was this. In the opening game of the 1970 World Cup, Russia was playing the host team Mexico. At halftime the scoreline was 0-0. But immediately before the second half began, with the teams already on the field there was a slight delay as Puzach ran on to the field — was waved on, actually. In those few seconds Puzach had become the first-ever substitute in a World Cup game.

Which meant that FIFA after years of controversy about the topic, had made up its mind. Substitution was now an official part of the game. Just two subs per game.

This was a fundamental change in the rules. There was no mention of replacing an injured player. The substitutes could be used whenever the coach decided. One of them would probably be held back until late in the game, a safeguard against injury, but the other was obviously going to be a tactical sub.

I had been mulling the question of subs for years. I had never seen a game with subs — I don’t think there were any in Europe, certainly not in England, where substitution was regarded as a form of cheating. I had no idea that the South Americans had been using subs for decades — in exhibition games and in competitions organized by CONMEBOL. I was also unaware that in 1947 the FIFA Referees’ Committee had decided that “Replacement (substitution) of players in competition matches, even if they have been injured, is not permitted.”

I would have been shocked to learn that Pele (the one Brazilian we all knew about) had begun his international career in 1957 as a 16-year-old sub.

From that position of widespread ignorance I had more or less decided that subs were OK to replace injured players but not for any other reason. It’s quite probable that, even had I been much better informed, I would still have reached the same conclusion.

Because my objection to subs was based solely on my view that the tactical sub allowed the coach to interfere directly in the live action of the game. I was not convinced then — and I remain unconvinced — that this makes for a better game.

I strongly approved of what the Rulebook said: “... nor shall he [the referee] allow coaching from the boundary lines.”

But I could also see that coaches were blatantly ignoring this rule, and that referees were reluctant to punish them.

The coaches knew what they were doing, didn’t they ever. Quietly, subversively, the word leaked out. As the 1990 World Cup approached we learned that a FIFA Memorandum to the World Cup Referees included this: “Coaching of players during a game is permitted only from the team’s bench.”

A flat-out contradiction by FIFA of its own rule, which still banned all “boundary-line” coaching. The coaches had simply raised their voices, made a mockery of the current rules, and got their way. IFAB, the rule makers, had abjectly given in.

The Rulebook ban, increasingly ignored of course, was not finally removed from the Rulebook until the 1993-94 edition which read “The coach may convey tactical instructions to players during the match.”

And I feared — to the point of being sure — that things would not stop with just two subs, though even in my gloomier moods I don’t think I ever got around to imagining five subs.

But that’s where we are. That is what the English Premier League has decreed for its 2022-23 season and IFAB has approved worldwide. The rationale is not without merit, representing the change as necessary because of the physical challenges modern players face, from a faster game, and a greater number of games played.

There are other ways of countering the energy-drain caused by too heavy a schedule — shortening games to two 30-minute halves, for instance — or simply shortening the playing season.

That the game is faster cannot be doubted. Whether that makes it a better game is questionable. I doubt it. More likely is that it will become a sport in which physical fitness and stamina are all-important, hence the need for more substitutes. A less intelligent, more physical game with less time to think. Is that what we want?

It may be what a newcomer to the scene wants — what television wants. Television has brought massive amounts of money to the sport, and that money means change.

Money is a factor I never thought of back in the innocent days when I worried about the number of substitutes and the growing influence of coaches.

Now, here comes the EPL with its five subs. This was agreed upon by a vote from all 20 EPL clubs.

We now have a sport divided, at the pro level, into the super-rich clubs, the merely rich clubs, and the large minority of not-so-rich clubs.

Are the super-rich clubs so powerful that they can influence how the game must be played? Of course they are. Their big move — to create their own European Super League — collapsed last year, but I have no doubt it will be back, better planned, better organized, and that the rich guys will get their way.

They have just done so in the EPL. The 5-sub rule was used in the EPL for the 2020-2021 season — as a temporary anti-Covid move. At the end of that season, the 20 EPL clubs voted on whether to continue with 5 subs for 2021-2022. When the 10-10 vote failed to produce the necessary majority, the 5-sub scheme was dropped. Pep Guardiola and Jurgen Klopp (super-rich-club coaches, both of them) let it be known that they disapproved of the vote.

In March of this year, another vote was taken, this time giving a 14 to 6 vote in favor of 5 subs for next season. This is not easy to fathom. Arsenal (super-rich club) coach Mikel Arteta tried to explain the vote in soccer terms, asserting that coaches would now have “options to refresh the game.” The usual coaches’ hogwash, ever certain of their own ability to do what is “good for the game.”

The use of five subs clearly favors the rich guys with their larger rosters, and benches full of top international stars. For the majority of the clubs, digging into their bench can only mean bringing on inferior players.

As there are no obvious advantages for the merely rich clubs, their support for the 5-sub rule (a reversal of their vote only one year earlier) needs an explanation.

I have none to offer. But I would point out that, not for the first time, a move to increase the number of subs comes with assurances (from coaches) that it will improve the game, and that it now has the support of the super-rich clubs. By no means the sort of backing guaranteed to produce a better game.

Strangely enough, the topic of substitutes always makes me feel ill at ease. I’ve carried out an amateurish analysis of my own discomfort, and this is what I’ve come up with. It goes back to my boyhood and that early belief that substitution was linked with cheating. Then came 1970 and the sudden interest in Anatoly Puzach, and the way he was being lauded (or so it seemed), when he had done nothing except to be in the right place at the right time.

But his momentary glimpse of fame, came at a price. It had a victim. Albert Shesternov, 28, a defender with CSKA Moscow. The player who was dumped to make room for Puzach. No one talked about him at the time, I recall no stories, even interviews. In fact, I had to cull the FIFA stats to get his name right.

He died in 1994. He is generally regarded as one of the Russian greats, a libero who played 90 times for Russia, 62 times as captain.

But that moment in 1970, the moment marking substitution’s triumphal recognition by FIFA, the moment of Puzach’s fleeting fame, must have been a very bitter pill for Shesternov. Maybe something of the unfairness that he suffered then has been with me ever since. Why, by which whim of fate, did Shesternov have to be a victim? It really does seem that I link substitution with whatever is the opposite of fair play.

That’s the best my dabbling in Freudian mysteries can come up with. I’m not dissatisfied. Life has enough unfairness without a contribution from soccer. I’ll not be seeking treatment for my failing: Being against unfairness. I can live with that.

But those whispering, persistent reminders that, in soccer, prolific substitution is not a good idea — I’m not so sure I’ve learned to live with them.