In its first of two friendlies against Colombia, the USA defeated a resilient foe, 3-0. The Americans, who squandered two penalty kicks, played most of the match in Colombia’s half and finally found their breakthrough in the 54th minute. A combination of last-ditch Colombian defending and an uncoordinated American attacking had made for an awkward, disjointed first half. The quality of the U.S. team showed in its defense and possession in midfield. In the attack, the Americans got the ball in behind early and often but were missing their shooting boots for much of the match. Colombia clogged the spine of the field with a five-woman backline and a trio of defensive midfielders. Colombia tired in the second half and the USA played some pretty soccer en route to what ended up being a comfortable win. Sophia Smith scored twice, in the 54th and 59th minute. The 6-foot-1 Taylor Kornieck scored in her debut. 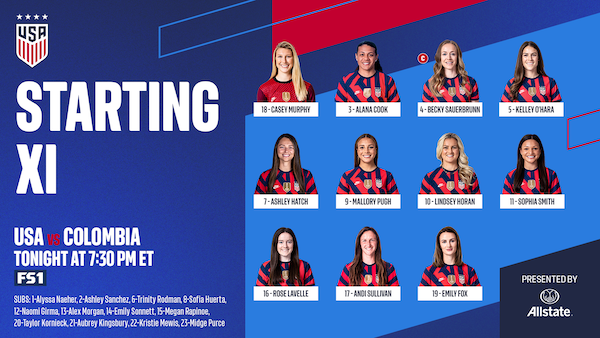 Casey Murphy did not face a shot against Colombia. She distributed well but was also never under pressure.

The U.S. backline stood strong and imposed their physical, technical and tactical dominance over a measly Colombian attack. Becky Sauerbrunn and Alana Cook won their aerial duels and fed the ball to the U.S. midfielders early and often. Kelley O’Hara had an excellent cross to Lindsey Horan that created one of the best chances of the first half. Left back Emily Fox participated in the U.S. attack and performed her defensive duties assuredly.

Rose Lavelle grew into the game and her runs from deep wreaked havoc on the Colombian backline. For USA’s opening goal, she won a 50/50 midfield ball and drilled an expertly weighted through ball to Smith. Five minutes later, Lavelle stole a loose ball and played another superb pass to Smith, who scored her second of the night. It would have been a complete performance but for a bad miss in the first half and a saved penalty kick. Lindsey Horan also failed to convert a penalty kick and looked lethargic in the final third. Her halftime replacement, Ashley Sanchez, breathed exciting offensive energy into the U.S. midfield. Defensive midfielder Andi Sullivan  played a calm, disciplined game before subbing out in the 73rd minute.

It was a tale of two halves for the American strike force. Ashley Hatch struggled to find space in a busy Colombian box and left at halftime. Sophia Smith struggled in the first half — she could’ve easily had two in the opening 20 minutes — but rebounded well in the second by putting away her two one-on-ones. Mallory Pugh missed a tap-in in the first half and squandered a few other half chances in the second.

Ashley Sanchez showcased some nice dribbling skills on the left flank and took advantage of a tired Colombian defense. She created several good chances for the USA and was the most exciting of the U.S. subs. Her crosses could have been more accurate. Alex Morgan won USA’s second penalty kick, which was saved after a poor shot by Lavelle. Taylor Kornieck became the 248th player to play for the U.S. women’s national team. At 6-foot-1 Kornieck is also the tallest to play for the USA. She celebrated her debut with a nice header goal, assisted by a Megan Rapinoe free kick, in the 90th minute.