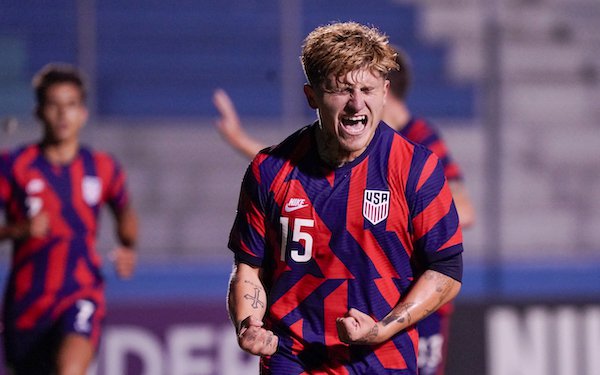 It wasn't until just before the whistle at the end of the first half that the was able to break through with a goal against Nicaragua, but it cruised in the second half to a 5-0 win in the round of 16 of the Concacaf Under-20 Men's Championship.

Quinn Sullivan continued his hot streak, scoring the first and third to give him five goals in the last two games. He was also fouled in the penalty area but allowed Diego Luna, who set him up on the first goal with a darting run through the penalty area, to take the spot kick he converted to make it 2-0.

Nicaragua was playing its first game at the tournament in Honduras. It was one of four teams that advanced from pre-qualifying groups played last fall, beating U.S. Virgin Islands, Guyana and the Cayman Islands. Miguel Rodriguez was a steadying force in goal for Los Pinoleros, who stymied the mis-firing Americans in the first half.

"Credit to Nicaragua," said U.S. U-20 coach Mikey Varas. "They came out to play a brave strategy. They were pressing us, playing with a lot of energy."

He said his players did a good job of stretching Nicaragua and getting behind its backline at times.

"We just need to be a little bit more clinical  with the chances we have early on," he added.

Varas continued to rotate his squad, starting a different midfield trio for the fourth straight game. Up front, Sullivan is the only player who has started the last three games.

The USA, which outshot Nicaragua 20-6, did not receive any cautions. Four players, all starters on Saturday, picked up yellow cards in the group stage: Jack McGlynn, Tyler Wolff, Cade Cowell and Luna.

• The prize: The 2022 Concacaf Under-20 Championship serves as qualifying for both the 2023 Under-20 World Cup (four quarterfinal winners advance) and 2024 Olympics (two semifinal winners go to France).