Long-suffering Atlas fans turn out for a very happy reunion 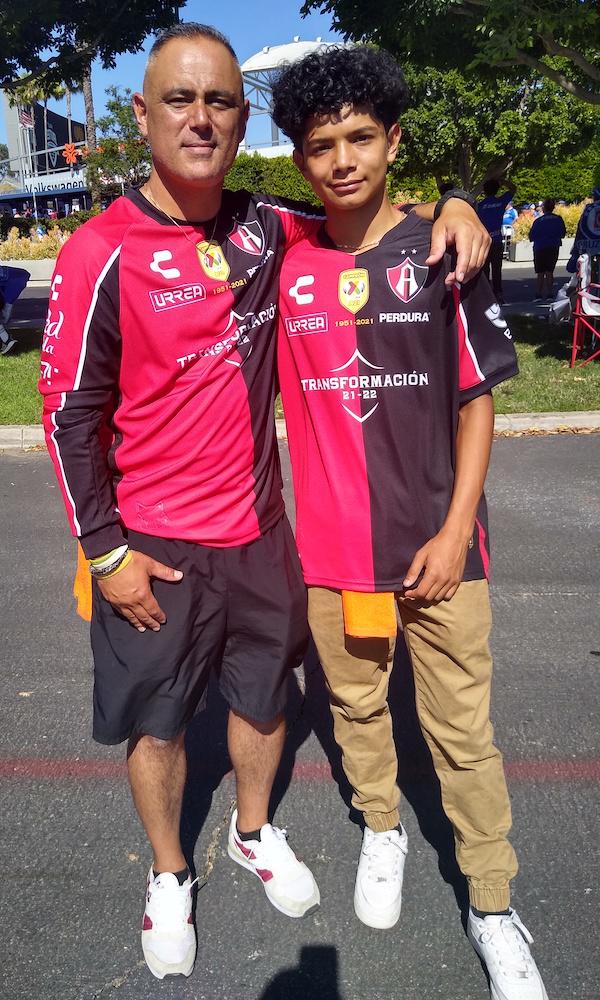 Jesus Villalvazo spent a good deal of his childhood at Estadio Jalisco, watching his family's beloved Atlas FC lose to some of Mexico's finest clubs. And fall to too many foes not so fine.

“I've been going to games since I was conscious, like 3 years old,” he said following his team's Campeon de Campeones showdown Sunday night against Cruz Azul at the LA Galaxy's sold-out Dignity Health Sports Park. “If I'm honest with you, I remember them being low. Like, if I can put it, the Sacramento Kings of the Mexican soccer league.”

Those days are gone, erased by the Guadalajara club's aggressive new ownership and the resulting back-to-back Liga MX titles in last season's Apertura and Clausura tournaments that ended a 70-year drought. So Sunday's traditional kickoff to the new season, which begins next weekend, mostly served as a celebration for its long-suffering California faithful.

“This means a lot. A lot of a lot,” said Carlos Moncillo, an Atlas fan from La Puente, in the San Gabriel Valley. “This is the best thing that can ever happen to us.”

Los Zorros fans turned out in bulk, matching those cheering on Cruz Azul, a bigger and more successful club that, it has previously appeared, has a much larger fanbase in Southern California, where one can find passionate fans of every top-flight Liga MX side. And if it ended disappointingly for them — their Mexico City rivals were celebrating after a penalty-kicks triumph following an intense and dramatic 2-2 draw — no problem.

Atlas, the only “campeon” on the field, had already captured the real trophy. Cruz Azul merely won this event.

“It doesn't mean anything,” said Villalvazo, a Tujunga resident nearly out of his teens and accompanied by his father, Jose. “That cup [Cruz Azul paraded] is just something they came up with. We won the actual Campeon de Campeones. That's all that matters.”

He pointed to the shield on the black-and-red jersey he wore.

“And these three stars on our crest,” he said, “that's all I care about.”

Mexican soccer, of course, is a huge deal in these parts, where millions from Mexico have come in search of a better life. Club America and Chivas de Guadalajara, the country's most storied and popular clubs — Superclasico rivals bitterly despised by their crosstown foes facing off on this occasion — might have the biggest followings (with Morelia, largely from Santa Ana's huge community from Michoacan, not so far behind), but this most Mexican of U.S. metropolises possesses huge swaths loyal to so many teams from back home.

“[Everyone] follows their team,” noted Oscar “Cyber” Rodriguez of Los Angeles, who sported on his back a large tattoo of Bart Simpson spray-painting a Cruz Azul logo. “There's also hardcore [fans]. Most of the people can't go to Mexico, because of their situation, so when [the clubs] come here, they're, like, 'I'm down.' They [do whatever is needed] in order to be here.”

Rodriguez was one of the leaders as La Eterna Lealtad Azul Kali, Cruz Azul's local supporters club, gathered in the parking lot for a raucous pregame demonstration — jumping and singing as drums pounded, horns wailed and flags waved in the ocean breeze -- that even had Atlas fans nodding in rhythm and pulling out their camera phones.

“This group is [an animated] group,” Rodriguez said. “We'll follow Cruz Azul everywhere we go, across the nation, internationally. Anywhere in the U.S., and Mexico, too. This is really love. Amor eterno — it has to be eternal. It's not like you just go for Azul, it has to be in your blood.”

“For us, this is everything,” he said. “It is a passion. It's everything. It's your life, you know?”

That can lead to trouble on occasion — not here, these are friendly rivals — and stories are legion of fans forced to forfeit T-shirts proclaiming their love for their team; of thefts of rivals' flags, which are torn and hung upside down, with photographs on social media showing off the bounty; of fistfights and rumbles.

“This shirt [I wear] is not just a Cruz Azul shirt,” Ramos said. “It's a supporters [group] shirt. Anyone from any other team sees me with this, they'll take it away. I've got to fight for it.”

Rodriguez compares it to the local rivals. The Galaxy and Los Angeles FC's fan bases have clashed on occasion, and real animosity exists.

“You're always going to have troubles,” he said. “Like LAFC can't [stand] Galaxy fans. It's almost the same, but we try not to fight. Why? Because we want the little ones to continue [this fan group]. And without fighting, it's really love.” 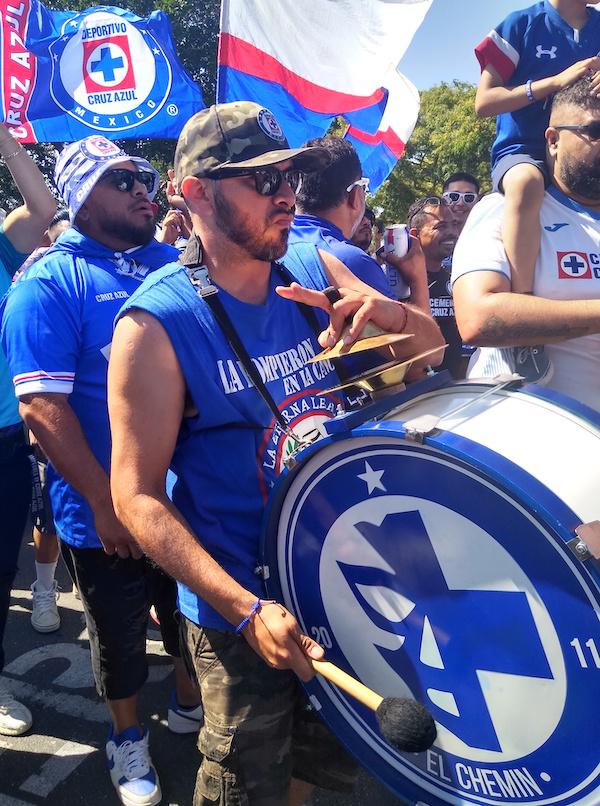 No problems on this day, but Sheriff's deputies are nearby just in case. There's no hatred between the clubs nor their fans, and some of the tailgating gatherings are mixed, with fans and flags sporting both sides' colors.

“[When the Mexican community is] united and when they stick together, everything is stronger. It crosses borders, right?” said Atlas fan Hugo Sigala (photo). “It's really neat to see everybody come together. Family environments. Nobody's arguing, nobody's fighting.”

Ramos, who said he once had to fend off Pumas UNAM fans in San Jose intent on snaring his shirt, is a bit of an outlier. He's from Guadalajara rather than the capital — he wears a “Jalisco” cap in Cruz Azul colors — and says his conversion to Cementeros fan “is a long story, but they stole my heart.”

For most, it's a family thing. Sigala, a California native, followed his father into Atlas fandom. He trekked the 350 miles from San Jose with his son, Giuseppe.

“We get a piece of what we see in the regular league at home [on TV], and we pass it down to the next generation,” said Sigala, a California native whose father emigrated from Guadalajara. “It's actually a neat experience to be able to pass it on.”

Atlas' success since its takeover by Grupo Orlegi, a sports and entertainment company guided by Mexican billionaire Alejandro Irarragorri that purchased the club in 2019 from TV Azteca, has made it all the more sweeter. The new owners have Invested heavily in the club's infrastructure and on its roster, and the trophies are the most concrete byproduct.

“It's getting bigger,” said Gabriel Miramontes of San Jose, part of the Barra 51 California statewide fan group occupying the southeast corner in the stadium. “A lot of normal people have always been Atlas fans but didn't really go much into it because of the whole not winning a lot. Now that we're winning a lot, they're starting to show up.”

When they do, they find familial bonds.

“A lot of people don't have much family here, because we had to come from abroad,” Miramontes said. “A lot of people here have been our family for years. So it's like a reunion here.”

“The majority of us had never seen us win anything,” he said. “We've always been in a box. We were always a bad team, but now the tables have turned and we're winning. ... We've got a lot of family members that never got to see our team win. They passed away, they couldn't see it. This is a special thing.”

Watching Cruz Azul celebrate at the finish didn't sting all that much.

“I think this is more an advertisement, a ticket-seller for the league,” said Villalvazo, who is ready for Atlas' opener Saturday at America. (Cruz Azul kicks off simultaneously at Tigres.) “I don't mind [that we didn't win]. I got to see the team I grew up watching, and as champions.