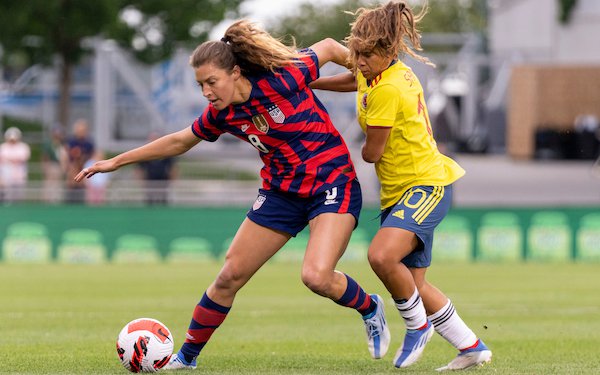 When the USA heads down to Monterrey, Mexico, for the Concacaf W Championship, which begins on Monday against Haiti, no player will be more excited to be there than Sofia Huerta.

The 29-year-old right back will be able to see relatives.

"It's kind of like a full circle, a little bit of a journey for me," she said on Monday ahead of the second USA-Colombia friendly. "My family still lives in Mexico so they're going to be at the qualifiers, and I haven't seen them since I was a senior in college."

Huerta's father Mauricio was born and raised in Puebla, and met his American wife, Jody, at the University of Wisconsin, where he was studying engineering. They raised three children in Boise, Idaho, where Sofia was a three-sport star (soccer, basketball and track & field) before attending Santa Clara.

Huerta's journey has certainly been unusual. She started out playing for Mexico, which she represented at the 2012 Under-20 World Cup in Japan. She filed a one-time switch of association to play for the USA but her senior career stalled after just seven caps in 2017-18. It wasn't until last November, when the rebuilding campaign under Vlatko Andonovski began in earnest, that Huerta played again for the USA.

"My conversations with Vlatko have always been really honest," she said, "and he's been really great, letting me know what my role is going to be."

That role is at right back and right now she is the backup to Kelley O'Hara, the only two-time world champion who has been consistently starting throughout the last year.

Huerta was playing as a forward for the Chicago Red Stars when she was called into the national team by then-head coach Jill Ellis in 2017, but she was promptly moved to the backline.

"I'd been training with the national team for three months before my papers had been processed and I was able to make the one-time switch," said about her U.S. debut against New Zealand at  Dick's Sporting Goods Park, site of Saturday's 3-0 win over Colombia. "Jill had communicated to me that I was going to get in. But then Taylor Smith had gone down with an injury pretty early on in the second half. I can say this now, looking back, I just wasn't prepared and I was really nervous going into that game, and you can see it on my face. And obviously that was the first time I'd ever played outside back, minus the training camps, before the game."

Huerta says she felt she could play the position.

"I was given opportunities," he said, "but I just never felt like I was given a chance to really perfect that position."

The turning point came in the 2018-19 offseason when she went to Australia to play for Sydney FC and was used at right back.

"When I went to Australia and I played 14 games there, I really got comfortable," she said. "And so I knew that if I ever was asked to play in that position again, I would be fine."

That call came last July, in the middle of Huerta's second season at OL Reign, after Laura Harvey took over as head coach for Farid Benstiti and told her she was moving to right back.

"I said, 'Perfect. I know how to play there now, so should be good,'" she said with a laugh.

Huerta is one of the most poised players the USA has used at outside back, and her attacking instincts come naturally.

"I was able to get back on to the team with hard work and obviously working on my game, but more so my mental side," she said. "And so going into the last game in Colorado for my 13th cap, I was just very excited and obviously have a different mindset. I'm more comfortable with where I'm at, not just position-wise, but just mentally. I feel comfortable being here and I'm confident that I'm meant to be here."

A lot has changed with Mexican soccer since Huerta played for the U-20s a decade ago.

"There's a huge fan base for women's soccer there," she said, "which is a surprise to me because I felt actually when I played on Mexico that was something that was lacking. And it's so great to see that they have so much support."

The USA's third group game at the W Championship will be against Mexico. By then, the USA and Mexico could have clinched berths in the semifinals — and tickets to the 2023 Women's World Cup — but the outcome of their match could determine the matchups for the semifinals, whose winners will meet to decide the first of two Concacaf tickets to the 2024 Olympics in Paris.

"It's going to be difficult," she said. "We are going to have probably a sold-out crowd with everyone cheering against us and that's not something we're used to."

Not quite everyone will be cheering against the USA, though.

"My dad's coming," Huerta said. "He's gonna be able to spend time with his family as well. And I know that they'll be wearing U.S. jerseys, so that's pretty cool, too."