Coach Vlatko Andonovski made nine changes from Saturday's 3-0 win over Colombia, with only midfielders Rose Lavelle and Lindsey Horan returning to the starting lineup. Veterans Megan Rapinoe and Alex Morgan created a frontline, along with Midge Purce, that failed to score. One of the more unimpressive U.S. performances was made worse by a one-hour thunderstorm interruption at the 75th minute. The 2-0 win came thanks to a first-half own goal and a rare strike by defender Kelley O'Hara shortly after the lightning threat was deemed over. 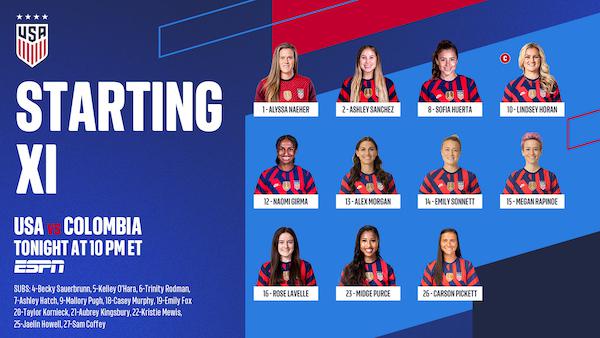 Alyssa Naeher's action in the first half came with three ventures out of her penalty area. On the first two, she delivered the ball to teammates, but on the third she was fortunate Colombia couldn't capitalize on her giveaway while she was stranded. With a spectacular dive, Naeher got her finger tips on a 24-yard shot by Leicy Santos that may have been headed into the high corner of the net. Naeher bobbled a low 22-yard shot to give up a 88th-minute corner kick.

Sofia Huerta's cross led to the own goal — a diving header by Manuela Vanegas — that put the USA ahead in the 22nd minute. The right back played mostly deep in the Colombian half and sent passes to right winger Midge Purce and to midfielders. As the game went on, Huerta's play became inconsistent, plagued by poor touches. Left back Carson Pickett also played mostly an attacking role and did well to maneuver past her first challenger to buy time and find teammates. But her left flank failed to produce as both Ashley Sanchez and Megan Rapinoe gave poor first-half performances. Central defender Emily Sonnett intervened whenever the Colombians came down the middle and also delivered a couple decent longer-range passes. Her central partner Naomi Girma demonstrated her tackling acumen when she cleanly won a midfield tackle late in the first half. Girma passed crisply — such as after cruising past two Colombians to spark the attack ahead of the second goal. Both she and Sonnett got touches in the sequence ahead of the first goal.

Lindsey Horan only fleetingly orchestrated from her central midfield position, her best moment coming when she fed Rose Lavelle during the combo ahead of the opening goal. Lavelle was the most dynamic of the midfield trio, but her one-on-one efforts became less successful as the game went on. Ashely Sanchez, part of the ineffective left flank during the first half, wasted a second-half chance with a horribly high shot. She chipped in the ball that made its way via Trinity Rodman and a defender's deflection to Kelley O’Hara on the second goal.

Megan Rapinoe couldn't beat Colombians on the dribble and her poor passing included a chip from midfield straight to the center back with no Americans in sight. Late in the first half, she under-hit a free kick from midfield (straight to the first defender) and early in the second half over-hit a corner kick. In the 60th minute, she hit a square pass to Colombia's Lorena Bedoya to end another U.S. attack before it threatened. Midge Purce, shortly after kickoff, hit a pass from her flank into a defender and a shot into the keeper. She never improved her aim, gifting passes to defenders and mis-hitting shots. Alex Morgan hit the crossbar from 6 yards on a difficult leaping volley. She dished short-range passes, including one in the own goal buildup, but didn't trouble the Colombian backline much and whiffed on a header in the second half.

The frontline looked more dangerous if not cohesive after Trinity Rodman came on at halftime. Her header was deflected to Kelley O’Hara, who rewarded the fans who stuck around after the weather delay with a sharp half-volley into the net two minutes after the re-start. Mallory Pugh troubled the Colombians more than the first-half wingers did but she shot badly wide on a good chance and after an exciting dribble through penalty area in the 83rd minute passed aimlessly across the goal area when poise could have turned it into a goal.

TRIVIA: Kelley O'Hara's two previous goals came in a 2-0 win over Germany in the 2015 Women's World Cup semifinals and a 10-0 win over Puerto Rico in 2016 Olympic qualifying.