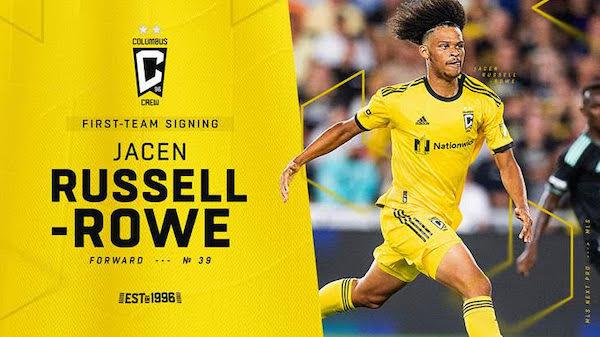 Jacen Russell-Rowe, signed by MLS's Columbus Crew from Columbus Crew 2 on Wednesday morning, had a quite game for his first MLS start.

The 19-year-old Canadian forward had two assists in the first 30 minutes as the Crew beat Toronto FC, 2-1, at BMO Field.

Toronto FC held his MLS Homegrown Priority rights, and the Crew had to send the Reds $50,000 in General Allocation Money for 2022 -- with the potential for additional allocation money -- to acquire MLS Next Pro's top scorer.

Since his first game in MLS Next Pro on March 26, Russell-Rowe scored 11 goals and grabbed two assists, a run that included goals in nine straight games and make him MLS Next Pro's leading scorer, one more than Orlando City B's 22-year-old Jack Lynn.

The 6-foot-1, 176-pound Russell-Rowe made his debut for the Crew June 18 against Charlotte FC while on short-term loan. After two loans, the Crew had to sign him to a permanent deal if it wanted to sign him.

Hailing from Brampton, Canada, Russell-Rowe represented Canada at the under-17 level before playing two seasons at the University of Maryland.

“This signing showcases the benefits of having a second team and is a testament to the success that Crew 2, and Jacen, are having this year," said Crew president & general manager Tim Bezbatchenko.