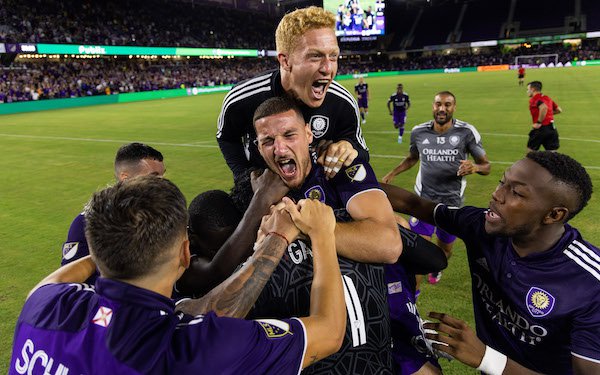 Orlando City beat Nashville SC, 6-5, in a shootout to advance to the U.S. Open Cup semifinals.

The Lions are the only semifinalist that also reached the final four in 2019, the last year the Open Cup was held. They will host the New York Red Bulls on July 27. Sporting KC will travel to the USL Championship's Sacramento Republic FC in the other semifinal.

Rodrigo Schlegel's stoppage-time goal kept Orlando City alive. Nashville SC, which had led on Hany Mukhtar's goal in the the 52nd minute, finished the game with 10 players after Sean Davis was sent off in the first minute of overtime for his second yellow card. He was one of 10 Nashville SC players (along with Coach Gary Smith) to be cautioned.

In the seventh round of the shootout, Pedro Gallese stopped Eric Miller's shot to keep Orlando City perfect in shootouts in the MLS era, 7-0 across all competitions.

Orlando City coach Oscar Pareja:
“I didn’t think we played well the first half, at least 35 minutes where Nashville was much better than us. [They] created options. I think the game was generous with us keeping it at zero. But after the goal, I thought we reacted and I want to recognize that reaction from the players. I think they had the personality and patience to go through it. The guys who came on in the game also helped us tremendously today. Gave us energy, gave us some creativity, too."