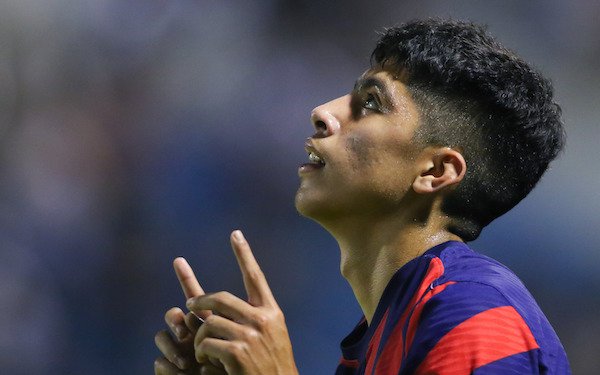 One of the most impressive aspects of the USA's 3-0 win over Honduras Friday night to clinch a berth in the 2024 Olympic men's soccer competition was how its U-20s weren't intimated by the crowd of 16,500 at San Pedro Sula's Estadio Morazan, known as the "Bombonerita" (the little Bombonera).

Five of the U.S. starters have never played a league game at the first-team level, let alone had Coke bottles thrown at them, like they did, or had lasers pointed at their faces, like what happened to backup Chicago Fire goalkeeper Chris Brady.

Alejandro Alvarado, 18, had slightly more experience -- one Primeira Liga start in his first season at Portugal's Vizela, which averages about 1,200 fans in its 6,500-seat stadium.

"We said control what we could control," he explained, "play our game, be with each other, look at each other and just focus, try to block out the outside noise."

The noise at the Estadio Morazan went silent in the 22nd minute when Alvarado scored to make it 2-0. Not that he noticed.

"If I'm being honest," Alvarado said on Saturday in an interview with Soccer America, "when the goal came, it was just about celebrating with the team."

The goal came when he poked a ball through the legs of the unfortunate Honduran keeper Juergen Garcia, but it culminated a nine-pass sequence that featured some nifty interplay among Paxten Aaronson, Caden Clark and Alvarado.

"It was a beautiful team goal," he said. "We started off through the back. I got the ball, connected with Paxten, it went to Mauricio Cuevas and he dropped the perfect ball. It was funny. The ball's coming and the defender skinned it. The ball came faster and it was kind of a reaction instinct. I got lucky to connect on the ball, and I think that's all I needed to mess up the keeper. It was an amazing feeling to celebrate with the boys, an important second goal to get, and I got lots of love from the boys and a celebration from my family back home."

Alvarado hails from Los Angeles and grew up in the Galaxy academy before moving to Portugal last year.

"It was great, my 10 years there," he said, "and I'm grateful for everything they did. I went on trial to FC Vizela and got there and they really liked me, so they offered me a contract. From there, it's just work, hard work, adapting to the system, adapting to the country, to the language. I'm thankful for the coaching staff there."

Alvarado was on the radar of the U.S. U-20 staff, but residency visa issues prevented him from attending any U-20 pre-tournament camps, which began in November 2021 when the USA was invited to the Revelations Cup in Mexico.

"We were following him based on a couple of first-team performances he had at Vizela," said U.S. U-20 head coach Mikey Varas. "Our gut instinct was that we saw enough there that we wanted to bring him. Alejandro's capacity to adapt to the level, integrate himself with the team and the style of play has been really impressive. There's no doubt that he's been an incredibly important part of this tournament." 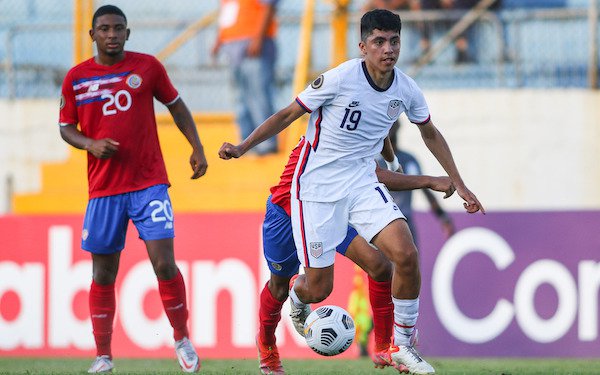 Varas has heavily rotated his lineup throughout the first six games at the Concacaf Under-20 Men's Championship, which ends Sunday night with the final between the United States and Dominican Republic.

Alvarado was the lone front six player to play the 90 minutes in the 2-0 win over Costa Rica in the quarterfinals, but he played so well that he kept his spot in midfield for the Honduras match and started for the first time alongside Jack McGlynn and Daniel Edelman.

"We played a double six with me and Edelman," said McGlynn, one of four starters from the Philadelphia Union. "Me and Edelman have a good connection, and finally Alejandro through the lines was killing them in the first half. He was open to play him almost every time I dropped back."

Alvarado plays at Vizela with Alex Mendez, who was the star on the U.S. U-20s when they won the 2018 Concacaf championship.

Alvarado's influence in the U-20s has grown with each game.

"I feel like every game has gotten a little better," he said. "My confidence has gotten better. The teams have gotten better, and I feel like it's been good, but I'm thankful for the coaching staff for giving me the confidence of bringing me here and believing in me. At the end of the day, I like my individual performances, but it's all about the team. We qualified to the World Cup and to the Olympics, which is a big achievement for everyone in this squad."