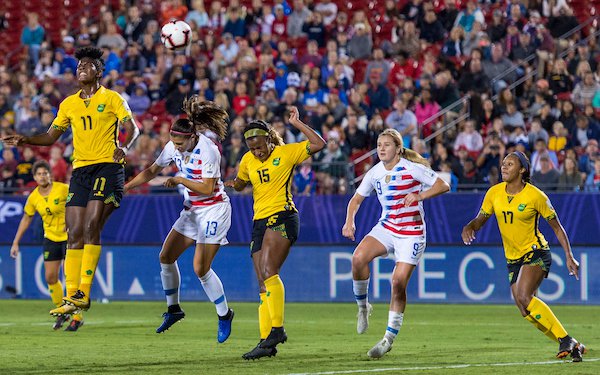 The USA plays its first game in the new Concacaf W Championship on Monday night when it faces Haiti at the Estadio Universitario in Monterrey, Mexico.

Instead of separate World Cup and Olympic qualifying tournaments, the Concacaf W Championship is a double qualification tournament.

By Thursday, the USA should have accomplished one of its two goals -- clinching a berth at the 2023 World Cup in Australia and New Zealand

The top two teams in each of the two four-team Concacaf W Championship groups will qualify for the 2023 World Cup -- the two third-place teams will enter inter-continental playoffs -- but only the Concacaf W Championship winner is guaranteed a spot in the 2024 Olympics. (The runner-up and winner of the third-place game will meet later in a playoff to decide Concacaf's second representative in the 12-team Olympic women's soccer competition in France.)

The most anticipated match of the group stage will be Mexico-USA on July 11. Mexico is the only team to ever beat the USA in World Cup qualifying -- a 2-1 win in Cancun that forced the USA to beat Costa Rica and Italy to reach the 2011 World Cup in Germany -- and it should have the support of a large crowd at the Estadio Universitario, home of Tigres, the best-supported women's team in the world outside of the NWSL.

It will take the biggest upset in the history of women's soccer for the USA not to qualify for the Women's World Cup -- and not to clinch before it steps on the field against Mexico. Wins over Haiti and Jamaica on Thursday should be enough to claim one of the top two World Cup berths in Group A. The USA has faced Haiti and Jamaica 11 times and won all 11 games by a margin of 72-0, never winning by less than four goals.

Haiti and Jamaica both feature a collection of homegrown and U.S.-based players. Haiti has brought 11 teenagers, including 18-year-old Melchie Dumornay, who plays for Reims in France, where she is considered one of D1 Arkema's best young players. Jamaican Bunny Shaw has scored 41 goals in three seasons with Bordeaux and Manchester City after graduating from the University of Tennessee.

The talent is there, but the Jamaican and Haitian federations have long histories of failing to provide support their women's teams and mistreating their players.

Jamaica's interim coach, Vin Blaine, resigned recently after his players demanded his removal, and longtime Colorado coach Lorne Donaldson scrambled to line up practice games against local Denver teams ahead of the the Concacaf W Championship. Donaldson was on the Reggae Girlz's coaching staff in 2019 when they went to the World Cup for the first time but complained about unpaid bonuses and training expenses.

In November 2020, a FIFA ethics committee banned long-time Haitian federation president Yves Jean-Bart for life after he was found to have sexually abused girls as young as 14. A FIFPro investigation found 34 “possible victims of sexual abuse and 10 potential perpetrators, including 14 names of potential victims of Mr. Jean-Bart," at the Centre Technique National, the FIFA-built soccer residency.