The USA started its qualifying quest for the Women's World Cup and the Olympics against a team, Haiti, that has never reached either. Alex Morgan's two goals within 23 minutes ensured an easy victory despite generally unimpressive play from the USA. Halftime sub Midge Purce scored late to make it a 3-0 win. 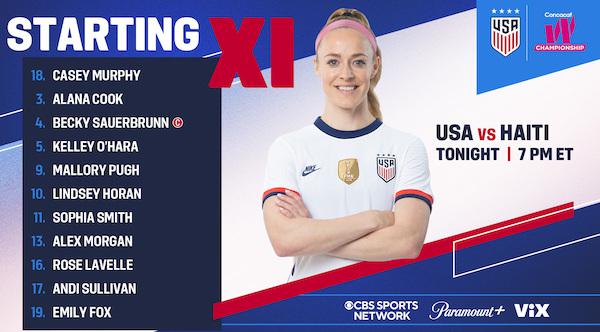 Casey Murphy timed her move off the line well to cut down the angle and block a one-on-one opportunity for Melchie Dumornay in the 37th minute.

On Dumornay's big chance, Becky Sauerbrunn froze and looked like she was getting out of the Haitian's way instead of intervening. The other central back, Alana Cook, wasn't tested. Left back Emily Fox's crude and poorly timed tackle earned her a yellow card and Haiti a penalty kick (which Roselord Borgella hit against the post). After over-hitting her first cross, Kelley O'Hara fine-tuned her play, which included the assist on Alex Morgan's second goal and a pass during the buildup to Morgan's first.

Rarely did the midfield trio of Rose Lavelle, Andi Sullivan and Lindsey Horan combine with each other. Horan winning a ball in the U.S. penalty area before getting subbed in the 68th minute marked a rare moment of her making an impact. Lavelle's passes were off-target and on this day she didn't provide the darting runs that often make her an attacking force.

Sophia Smith mis-hit her first pass, managed a cross that Alex Morgan headed onto the crossbar, then made no impact before getting subbed at halftime. Morgan scored her first goal with a nifty flick of Mallory Pugh's low cross. Morgan's second goal was a header past frozen goalkeeper Lara Larco from a O'Hara cross. After the assist, Pugh passed inconsistently and shot straight to Larco without pressure from 12 yards.

Midge Purce came on at halftime time and her first effort was a giveaway in the Haiti half. In the 80th minute, Purce squandered a close-range chance after Megan Rapinoe's service, but Purce  scored from 12 yards to make it 3-0 in the 84th minute. The goal came after Kristie Mewis' cross was headed to Purce by Haiti defender Kethna Louis. Sofia Huerta won a tackle shortly entering the game.

TRIVIA: The USA has now won all eight games against Haiti, dating back to a 10-0 World Cup qualifying win in 1991, without conceding a goal. Monday's 3-0 win was the lowest margin of victory in the series.