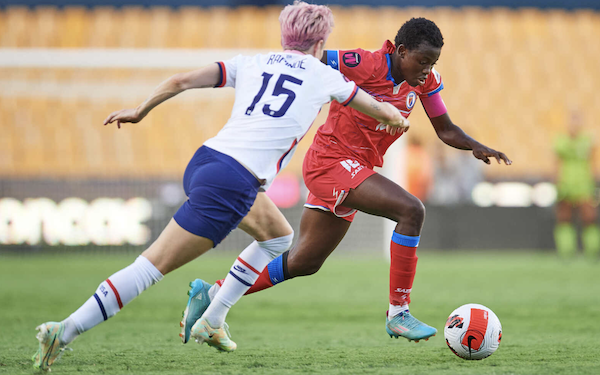 USA vs. Haiti is one of the USWNT's oldest and most one-sided rivalries.

The first time the teams met was at the 1991 Concacaf championship to determine the confederation's sole representative at the inaugural FIFA women's championship in China.

The USA beat Haiti, 10-0, in the semifinals before 40,000 fans in Port-au-Prince. The series has been like that ever since. The USA entered Monday's Concacaf W Championship in Monterrey with seven wins in seven games against Haiti, all shutouts.

Monday's 3-0 win raised the USA's goal difference against Haiti to 49-0, but this game felt different. Les Grenadieres should have scored twice in the first half thanks to their dynamic young attack.

In the 27th minutes, 18-year-old Melchie Dumornay left captain Becky Sauerbrunn in the dust, bursting into the penalty area, where U.S. goalkeeper Casey Murphy came off her line and stopped the Reims playmaker.

Minutes later, Dumornay was at it again, freezing Sauerbrunn before laying the ball off to 23-year-old Nerilia Mondesir in the right side of the penalty area, where the Haiti captain was taken down by U.S. defender Emily Fox for a penalty. Roselord Borgella stepped up but fired her spot kick off the post.

On the two plays, Dumornay exposed Sauerbrunn's lack of pace, though U.S. coach Vlatko Andonovski chose to praise Dumornay and her teammates in the Haitian attack.

"They're powerful," he said, "they're technical, they're knowledgeable and they're players that can change the game in a split second."

The Haitians exposed the lack of coordination in the middle of the U.S. defense, which featured Alana Cook in her World Cup qualifying debut alongside the 37-year-old Sauerbrunn and Andi Sullivan, another Stanford product playing her first World Cup qualifier, in front of them at defensive midfielder.

"I don't know if there was a miscommunication or anything between our center backs," Andonovski said. "I would say it was the really good play of the attackers on the other team. They are world-class players. And if you give them a little space or a little time, they'll expose you, they'll expose any team, any defenders."

Andonovski said the same thing could happen when the USA faces Jamaica on Thursday.

"We're going to have to do better because it's not going be any easier against Jamaica with players like Bunny Shaw and Jody Brown," he said before the Reggae Girlz upset host Mexico, 1-0, in Monday's nightcap. "That's another group of work-class forwards."