Christophe Galtier. the man for PSG's latest change of approach 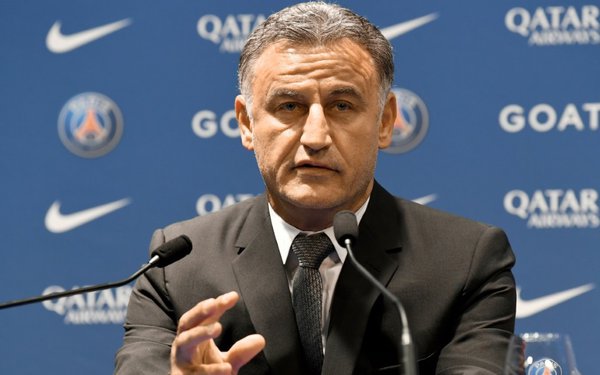 Christophe Galtier's appointment as Paris Saint-Germain coach confirms a change in approach from the Qatar-owned club as they continue their search for elusive Champions League glory, but there will be huge pressure on Mauricio Pochettino's successor.

Galtier, 55, becomes PSG's seventh different manager since the Qatari takeover of 2011 as he arrives on a two-year deal.

The new man in the dugout has developed a reputation as an outstanding coach over the last decade in France, enjoying eight years at Saint-Etienne and four years at Lille crowned with the Ligue 1 title in 2021.

However, he lacks the international profile of Pochettino and other predecessors like Thomas Tuchel and Carlo Ancelotti, or indeed Zinedine Zidane, who had also been linked with the job.

Despite that, Galtier appeared unfazed about the prospect of managing PSG's squad of superstars as he spoke on Tuesday.

"It is a privilege to have a locker room full of world-class players," said Galtier, who took Nice to fifth in Ligue 1 and the French Cup final last season.

He said there would "not be a revolution," but his appointment comes after PSG president Nasser al-Khelaifi outlined the new approach in a recent interview with newspaper Le Parisien. "We don't want to be flashy anymore. No more bling-bling. No more of the shiny stuff," he said, after last year's recruitment of Lionel Messi and other star names including Sergio Ramos and Gianluigi Donnarumma did not have the desired impact.

Galtier, who played briefly in China, based his success at Lille on a 4-4-2 system that depended first and foremost on a solid defence, even if his side still played exciting football going forward. A similar approach at Nice produced often turgid football, and he knows the expectations will be very different with Kylian Mbappe, Messi and Neymar at PSG.

"I will adapt to the players we have here," he insisted. "First things first, we need to win, but with the squad we have and the international reputation of the club we also need to play good football."

Campos, from Portugal, built the Monaco team that won the league in 2017 and the Lille side that Galtier led to the title last year.

Campos already knew Mbappe from their time at Monaco and the latter's decision to snub Real Madrid and sign a new three-year contract is still easily the most important deal that PSG will do this summer.

Galtier has little Champions League experience but he will be expected to build a team around Mbappe that can win that competition after some near misses and embarrassing failures over the last 11 years.

"He is one of the best players in the world right now. We need all the brilliant individuals to pull together. If that happens then PSG will be a great team and will have a great season," said Galtier.

PSG has already made one summer signing in the shape of Portuguese midfielder Vitinha from Porto, while Angel di Maria has left.

Then there is Messi and Neymar, who reported for pre-season training on Tuesday.

The Brazilian -- who embodies the era of "bling-bling" more than anyone else -- has been linked with a move away, but Galtier indicated he would like the former Barcelona man to stay.

"What coach wouldn't want him in their team? I have a clear idea of what I want from him. I hope he stays because it is better to have him with us than against us."

However, Neymar's presence is a reminder of what happened the last time PSG announced a similar shift in approach.

In 2016, the departure of Zlatan Ibrahimovic was followed by a series of modest signings and the appointment of Unai Emery as coach to replace Laurent Blanc.

But in the season that followed PSG was humbled in the Champions League by Barcelona and responded to that by buying Neymar and Mbappe for the two biggest transfer fees in the history of the game.