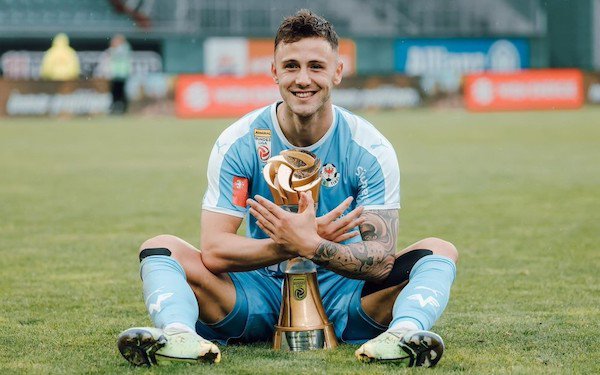 The New England Revolution has completed its trio of signings to replace its three stars -- Tajon Buchanan (Club Brugge), Matt Turner (Arsenal) and Adam Buksa (Lens) -- with the acquisition of Albanian forward Giacomo Vrioni from Juventus.

Vrioni, 23, spent the 2021-22 season on loan to WSG Tirol, tying for the scoring lead in the Austrian Bundesliga with 19 goals. He represented his native Italy at the youth national team level before filing a switch of allegiance to represent Albania. Vrioni has six senior caps for Albania, including two in June in the UEFA Nations League's group stage.

“We were looking for an attacking player, whether it was a midfield player or a striker," said Revs coach Bruce Arena, "and obviously those positions required some different qualities for sure, but in the end, we felt that we had a good opportunity to bring a No. 9 who could be very successful in this league, and that's why we brought him in. Giacomo, physically, has good size [6-foot-2]. He runs well in and around the penalty area. He’s a left-footed player."

Arena said Vrioni's success with Tirol was a factor in the move.

"He had an outstanding goal-scoring record this year in the Austrian league," he said, "and we did make note of the fact that a number of players that have come from that league in MLS have done well, so we feel it's a good fit.”

Vrioni made two brief Serie A appearances with Juve earlier in his career. He represented his native Italy at the youth national team level before filing a switch of allegiance to represent Albania. Vrioni has six senior caps for Albania, including two in June in the UEFA Nations League's group stage.

The Revs signed him to a Designated Player contract through the 2025 MLS season with an additional one-year club option. Vrioni, 23, will occupy New England’s third Designated Player slot. Carles Gil and Gustavo Bou are the other DPs.

“This is new for the Revolution," said Arena. "I think we’re trying real hard to move the club forward. We realize that we've been a little bit behind in a lot of areas and we're trying to catch up. I think over the last year or two, we've done a better job with our everyday environment here with our new training facility. Eventually, we're going to move into a new stadium, and I think that's going to help us with our visibility in our community and expanding our fan base, and that will one day make Boston I think a prime choice for many players around the world. In the case of Giacomo and some of our previous Designated Players, we can sell them on the fact that we now have a history as a club where we develop players and move players on to Europe if that is their ambitions. I think that was the case with Adam Buksa when we brought him in, certainly will be the case with Giacomo. Matt Turner has now recently left, as has Tajon Buchanan, so we are one of the few clubs in MLS, not that there aren't a number that do it as well, that can develop players and move them on to what they believe are better opportunities for them in Europe, so that's certainly a selling point.”