In a more polished performance than its 3-0 opening win over Haiti, the USA played more cohesively, passed more adeptly and shot more accurately in its 5-0 win over Jamaica that clinched a berth in the 2023 World Cup in Australia and New Zealand. (The USA's second win combined with Haiti's 3-0 win over Mexico assured the Americans of a top two spot in Group A.)

Only five of 17 U.S. shots were on target against Haiti compared to 11 of 20 against Jamaica, forcing six saves). But the USA had set the bar low with its play against the Haitians and the number of poor passes remained disturbingly high from some of the Americans.

On the backline, 22-year-old Naomi Girma, who replaced 37-year-old veteran Becky Sauerbrunn, in her third U.S. appearance made a strong case for regular starts. 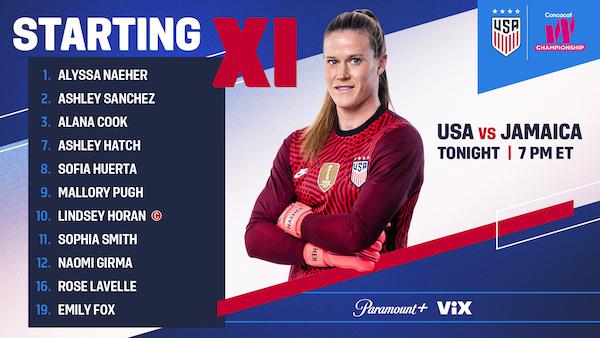 Required only to make two easy saves, neither was Alyssa Naeher tested with back passes. The 34-year-old, 5-foot-9 veteran will have to prove at practice whether she can fend off the 26-year-old, 6-1 Casey Murphy's challenge for the starting keeper spot.

Naomi Girma, central defender, assisted on the first goal with a cross-field pass into the stride of Sophia Smith. A couple minutes earlier, she won the ball in the U.S. penalty area after a Lindsey Horan giveaway. Girma, who defended with composure and tackled cleanly, with central partner Alana Cook shut down forwards Bunny Shaw and Atlanta Primus. Sofia Huerta, mostly secure with the ball under pressure and able to evade challenges with clever touches, assisted on Smith's second goal with a well-weighted through ball. Huerta also helped set up the  fifth goal with defense-splitting pass. It was an uneventful  evening for left back Emily Fox, not tested defensively and replaced at halftime.

For the second straight game, Lindsey Horan's performance failed to resemble her authoritative performances we're used to seeing. A weak Jamaican midfield freed her of defensive toil but she failed to exploit that with attacking prowess. The veteran was among the U.S. players who too often gave up the ball while not under pressure. For sure, this midfield trio (Ashley Sanchez in for Andi Sullivan) had a more commanding grip on the game than against Haiti. But if not for her impressive finish to make it 3-0, Rose Lavelle would have been disappointed with a performance that included hasty decision-making and an amateurish first-touch that ruined her close-range chance in the 22nd minute. Sanchez, too, rushed play instead of helping establish a rhythm, but often unsettled the Jamaican defense and assisted superbly on Lavelle's goal.

If this game hadn't been in the bag for the USA by the 10th minute, one can't imagine that Coach Vlatko Andonovski leaving Mallory Pugh on the field while subbing at halftime Sophia Smith after her brilliant performance. Near sublime was how Smith hit the net with an instep strike after beating Den-Den Blackwood with a half-volley tap of the ball after receiving Grima's pass. Smith's timing and awareness of the goalkeeper's challenge on her second finish was also remarkably skillful and composed. For Andonovski to keep Pugh on the field past halftime after a series of misplays, starting within a minute of kickoff, and weak shots must have been to provide her the chance to regain confidence. She started the second half by crossing out of bounds, did manage to help set up the third goal, but kept mis-hitting balls. Finally, in the 86th minute she assisted on Trinity Rodman's close-range finish with a sharp low cross. (Keeping service from the flank low like that and as Sanchez did for Lavelle's finish should become even more of a habit for the USA.)  Ashley Hatch nearly scored on a couple half-chances, hitting the crossbar on a difficult to reach ball, and in the second half she hit the post with a 20-yard volley.

Midge Purce, who replaced Smith at halftime, had a similar outing to Pugh's in that she finished on a high note after much flawed play, by contributing to a late goal (fouled for the penalty kick that Kristie Mewis converted). As in her performance against Haiti, Purce failed to deliver well after advancing from the flank when awareness of her teammates and good passes would have created scoring chances. Emily Sonnett passed to Jamaicans twice within a minute after entering. Taylor Kornieck skied a shot over the crossbar. Trinity Rodman's close-range finish required a well-timed run and solid strike.