The USA completed a sweep of its Group A opponents with a 1-0 win over host Mexico at the Concacaf W Championship. Lots of sloppy play marred the victory, which wasn't secured until the 89th minute when Kristie Mewis  scored to shatter Mexico's slim hopes of staying alive in World Cup qualifying. Jamaica became the fourth team to secure a berth at the 2023 Women's World Cup when it beat Haiti, 4-0. Mexico would have edged Haiti for third place and a spot in next year's intercontinental playoffs if it somehow managed to beat the USA, but it exited with three shutout losses. The USA remains the heavy favorite to win the Concacaf W Championship -- and claim the lone berth in the 2024 Olympics to come directly from the new regional championship -- but a poor performance will raise a lot of alarm bells. 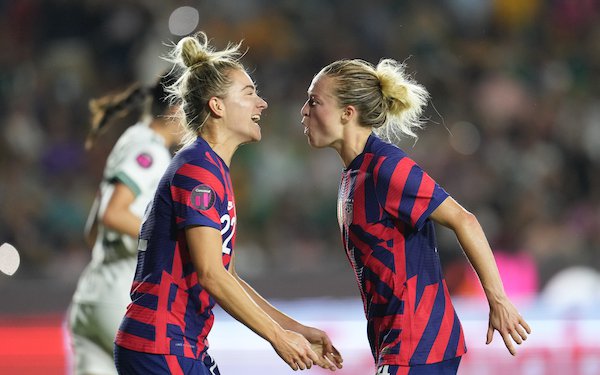 GOALKEEPER
Casey Murphy had less to do than in her first start, the opening match against Haiti. It wasn't until the 87th minute that she was tested with a low shot by Jimena Lopez that she easily handled.

With Taylor Fox unavailable due to health and safety protocols, Emily Sonnett started in her place at left back though she occasionally switched positions with the other outside back, Kelley O'Hara. Sonnett helped set up the late winner, but she was a turnover machine with a shocking display of aimless passing early in the second half. A bright spot again was Naomi Girma in her second start of the tournament, this time alongside Becky Sauerbrunn. She was firm in his duels and mostly calm on the ball..

MIDFIELDERS
The conditions certainly did the USA no favors. Playing in the Monterrey heat -- 93 degrees -- against an opponent desperate to find a way to stay in the tournament, the U.S. midfield was in a battle. But Andi Sullivan, Lindsey Horan and Ashley Sanchez struggled to connect with each other and their teammates in dangerous positions. Sullivan was guilty of her share of bad passes. Horan took a beating, but more than that, simply looked tired. Sanchez played a big role in the game's late winner, winning the ball in tight quarters on the endline and laying it off to Taylor Kornieck.

FORWARDS
Alex Morgan set the tone for the game 40 seconds in when she fired a 30-yard pass straight to Mexico keeper Itzel Gonzalez with no teammate in sight. Sophia Smith was a world-beater against Jamaica with two brilliant goals in the first eight minutes, but she was largely invisible against Mexico. In the 40th minute, Midge Purce set up Smith, who fired over the goal. In the 60th minute, Smith made a good run down the left channel but put her shot straight at Gonzalez. Purce was the USA's most dangerous player in the first half, hitting the post in the 15th minute and drawing a yellow card in the 34th minute. Besides serving up Smith, Purce created an open look in the 43rd minute for Horan, who fired her shot weakly into keeper Gonzalez's arms.

SUBSTITUTES
Three subs were involved on the winning goal. Sofia Huerta played the ball to the far corner of the penalty, where Sanchez played it off to Taylor Kornieck, whose centering pass Sonnett headed on goal. Gonzalez managed to push it up off the bottom of the crossbar to Kristie Mewis, who was ready for the rebound, which she bodied into the goal. Rose Lavelle was the victim of a vicious blow to her ankle that earned Jacqueline Ovalle a red card.

TRIVIA: The USA has recorded 31 consecutive shutouts in World Cup and Olympic qualifying.

NEXT UP: The USA faces Costa Rica in Thursday's quarterfinals.