Road to Paris: USWNT is two wins away from returning to Olympics 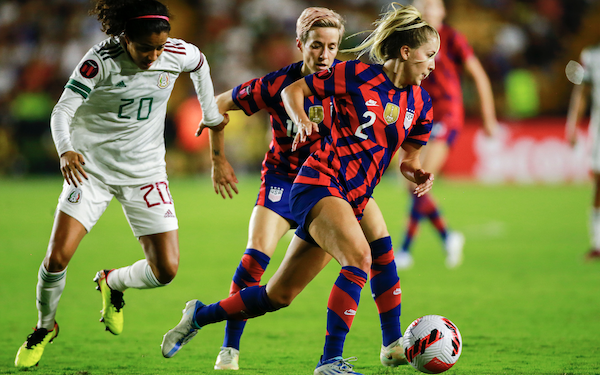 The USA is two wins away from completing a double qualification.

It has already secured a berth in the 2023 World Cup and will qualify for the 2024 Olympics if it beats Costa Rica in the semifinals of the Concacaf W Championship on Thursday and wins Monday's final against Canada or Jamaica.

If it splits its final two games in Monterrey, the USA will move into a playoff at a future date between Concacaf's second- and third-place finishers to determine its second representative in the Paris Olympics.

‘We trust these young players a lot.' The USA swept its three opponents in Group A, extending its streak of shutout wins in World Cup qualifying to 14 games (60-0 goal difference).

Only Haiti, in the opening game, posed any kind of threat to the U.S. defense, but the Americans have struggled to put together a cohesive attack, getting bogged down often with errant passing.

Players like Casey Murphy, Alana Cook, Naomi Girma, Emily Fox, Ashley Sanchez (photo, above), and Sophia Smith have less than 20 caps apiece, but each has taken on important roles in the lineup in their first major senior tournament.

"We trust these young players a lot," said U.S. coach Vlatko Andonovski, "and we're very happy where they're at in the development stage of their career and where they're at in preparation now for the World Cup, knowing that we've qualified for it. They know that they can play free. They know that they have our support. We've shown that in numerous occasions and we're going continue to show that, but it was good for them to also learn some things on their own."

He pointed to the third group against Mexico, decided on a goal in the 89th minute.

"It wasn't an easy game," he said. "Even though it didn't mean per se for us a lot, it meant a lot because we wanted to win the game."

'They do have some weapons that can hurt us.' The USA has won all 16 games the Ticas, including a 6-0 victory in their most recent meeting in Olympic qualifying in 2020.

Costa Rica qualified for the World Cup for the second time -- it reached the knockout stage in 2015 -- when it opened with convincing wins over Panama (3-0) and Trinidad & Tobago (4-0) in Group B, the easier of the two Concacaf W Championship groups. Its 2-0 loss to Canada dropped it into second place. 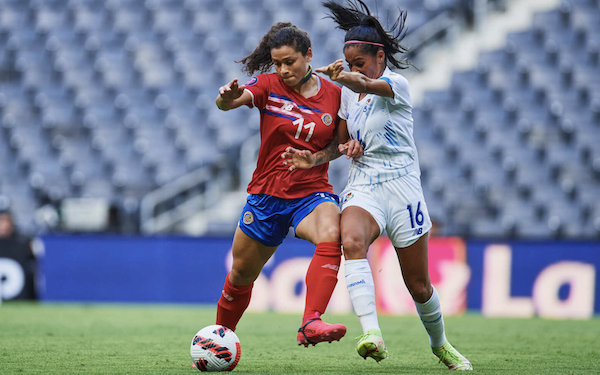 The Costa Rica star is Raquel “Rocky” Rodriguez (No. 11), who plays for the Portland Thorns in the NWSL, where she won NWSL Rookie of the Year honors in 2016 for Sky Blue FC after winning the Hermann Trophy at Penn State.

"I've coached against her and I've watched her play in the league so many times," said Andonovski, who spent seven seasons in the NWSL as a coach before becoming USWNT coach in 2019. "She does play a little bit more advanced for her national team than for her club team, so she's probably one of the most dangerous ones, not necessarily just from the scoring perspective but also assisting other players."

As far as threats up front go, Andonovski mentioned Melissa Herrera and Maria Paula Salas, who will lead Costa Rica at the 2022 Under-20 World Cup, which it will host next month.

"They do have some some weapons that they can hurt teams," added Andonovski. "It's up to us to make sure that doesn't happen."

If Costa Rica does score, it will be a shocker. In the 16 previous meetings, the USA has outscored the Ticas, 89-2. Both goals were allowed after the USA took a 6-0 lead in the first half of the 2015 Victory Tour match it won, 7-2, in Chattanooga.