The USA moved into the final of the Concacaf W Championship with a 3-0 win over Costa Rica. It led 2-0 at the half but didn't score its third goal until the waning seconds of stoppage time. It was another sluggish performance by the Americans, particularly in the second half, in the Monterrey heat. Costa Rica, which has lost all 17 meetings with the USA, rested many of its stars, preferring to save them for Monday night when Las Ticas will play in the third-place game. The winner of Monday's final will earn a berth in the 2024 Olympics. The runner-up and third-place winner will remain alive, however. The will meet in a playoff at a future date to determine Concacaf's second Olympic representative. 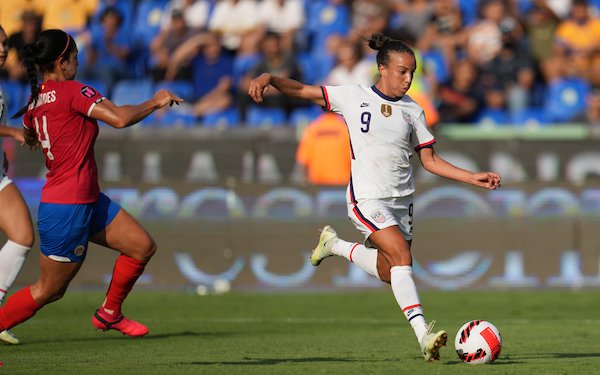 GOALKEEPER
Casey Murphy didn't have to make a save in her third tournament start, getting the nod in goal ahead of veteran Alyssa Naeher, but she had a couple of unusually nervous moments in the first half, a miscommunication with teammate Alana Cook that led to a corner kick and a clearance that was badly mis-kicked.

DEFENDERS
Alana Cook and Becky Sauerbrunn, the center backs, were rarely tested by Costa Rica, which chose to sit deep, even when it trailed. Sofia Huerta got the start ahead of Kelley O'Hara and was pushed high in the U.S. attack, where she found Alex Morgan for an excellent chance that was wasted in the 3rd minute. With Emily Fox still out due to Covid protocols, veteran Emily Sonnett took advantage of another start to score her first international goal, pushing a loose ball into the goal as she was falling down on her side.

MIDFIELDERS
The U.S. midfield continues to be a source of frustration. Andi Sullivan, the deepest-lying midfielder, did well to keep Costa Rica pinned in its half but struggled to unlock the Ticas' defense that clogged the middle. Rose Lavelle offered a piece of skill she is well known for, playing Mallory Pugh through with a back-heel to set up the second goal at the end of the first half. Starting her fourth straight game, Lindsey Horan looked sharper but still had little influence on the game despite being often thrust into positions to win physical duels.

FORWARDS
Mallory Pugh and Sophia Smith both did well on both sides of the ball. Pugh's goal was set up by Smith's work to win the ball just outside of the Costa Rican penalty area. But after a poor Costa Rican clearance late in the first half, the ball went straight to Smith, who shot straight at goalkeeper Noelia Bermudez with the goal at her mercy. In the 17th minute, Pugh's well-placed free kick put the streaking Alex Morgan through on goal, but Morgan, who had a rough first half, failed to put her shot on target.

SUBSTITUTES
Ashley Sanchez  finished the scoring late in stoppage time when she sharply hit a bouncing ball after Kristie Mewis' long ball from the right side was played to Morgan.

TRIVIA: The USA has won 60 of the 61 matches it has played in World Cup and Olympic qualifying The lone loss was a 2-1 defeat at Mexico in 2010 in the semifinals of World Cup qualifying. The final of the 2008 Olympic qualifying went down as a draw though the USA beat Canada on penalty kicks to win the tournament.