Amy Griffin on finding 'something cool' at various levels of soccer 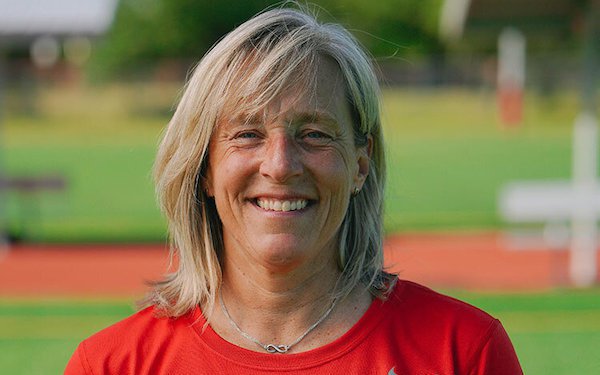 In 1991, Amy Allmann was preparing for the inaugural Women’s World Cup in China. She got a note from Bill Merrill, the University of California head coach.

In 1984, Allmann had wanted to play there. Merrill said: “You don’t have what it takes to play Division I soccer.”

Seven years later, he sent her a copy of her letter, with a Post-It. “Bill Merrill’s recruiting blunder,” he wrote. “Good luck in the World Cup.”

Merrill’s rejection was one of the few bumps in a long career. Allmann (who now uses her married name, Amy Griffin) played instead for the University of Central Florida. With Michelle Akers and a host of other talented teammates, she helped the Knights to three NCAA tournament appearances, and a trip to the final four. In 1987 she was named NCAA Goalkeeper of the Year.

Successes followed, including 24 national team appearances and a World Cup title in ’91 (while backup to keeper Mary Harvey); nearly 30 years as a college coach; assisting the Steve Swanson with the USA's 2012 U-20 World Cup-winning team; a USSF “A” coaching license (one of the first nine women to earn that badge), and head coach of the U.S. deaf women’s national team, the 2016 Deaf World Cup champions. Griffin now serves as executive director of OL Reign Academy, the Seattle-based NWSL club.

She’s back in her home state, thousands of miles from UCF. After Merrill’s rejection, she reached out to Coach Jim Rudy. He told her she could try for a walk-on spot, behind the incumbent keeper Kim Wyant.

“I’d be 30 minutes from Disney World, not far from the beach, training with Kim Wyant,” Griffin recalls. “I said, ‘Why not?!”

Reality was different. She went to the beach once, Disney World never. And after her freshman season, as she looked ahead to starting the next fall, she learned that Wyant was not, as she’d assumed, a senior. Wyant had another year left to play.

“I rode the pines for two years,” Griffin laughs now, decades later. “But it was great. I had no pressure. I learned a lot.”

Today, the Americans’ World Cup championship is seen as a watershed mark in American soccer history, and women’s sports overall. At the time, though, it did not seem that big, Griffin says.

Referring to herself and teammates like Akers, April Heinrichs, Mia Hamm, Julie Foudy, Kristine Lilly and fellow keeper Harvey, Griffin says, “Growing up, we’d had nothing to look forward to – no Olympics, no World Cup. We just played to fuel our addiction to soccer.”

The low status was real. With no professional league, women kept their competitive edge by playing on a few elite club teams, scattered around the country. While serving as an assistant to head coach Jerry Smith at Santa Clara University, Griffin joined the Tremors. They sold T-shirts in the parking lot of a men’s national team match to fund travel to a Las Vegas tournament.

Yet her U.S. national team and club experiences – including several years with the Tacoma Cozars, coached by Clive Charles and Washington governor Booth Gardner – were influential in Griffin’s growth as a player, and later as a coach.

“I learned how to compete and take risks,” she says. “Teamwork, pushing the envelope, the dogpiles — I loved it all. I’ve always tried to replicate those environments.”

She’s done it as an assistant at Central Florida, Santa Clara and San Diego State; the University of New Mexico, where she started the program in 1993, and over a decade as associate head coach at the University of Washington, under Lesle Gallimore. (Among goalkeepers Griffin coached at UW is one who became the world's best: Hope Solo.)

Gallimore left in 2019, and is now commissioner of the Girls Academy. Griffin applied for Gallimore’s position, but was bypassed. Now, with OL Reign, she’s once again working with Gallimore. 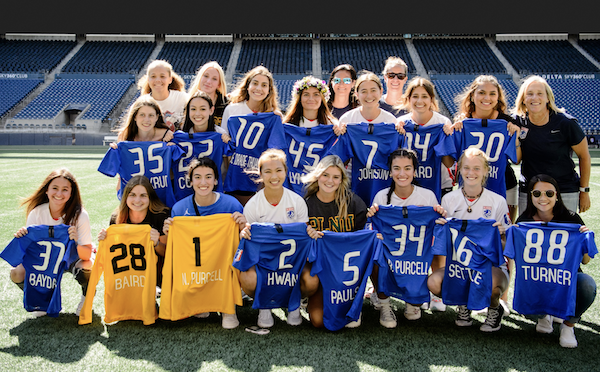 Coaching the women’s deaf national team since 2015 has been an added bonus.

Her second cousin is deaf, so Griffin learned a bit of sign language — “like taking an introductory Spanish course. I think I’m better now. The players might disagree — though they do appreciate the effort.”

Leading a team of deaf players has been educational, exciting and inspiring.

“I’ll never again underestimate the value of communication,” Griffin says. Some players have some hearing; however, athletes may not wear hearing devices during matches. The coach points out how different her own position of goalkeeper is without the ability to give verbal commands. A deaf goalkeeper sees many more shots than one who can hear. The entire game looks somewhat different, with only visual communication. But, Griffin says, anyone who watches a deaf soccer match for the first time becomes a fan. Or a donor, or volunteer.

“Joy (Fawcett, her assistant coach) and I are the ones who get only half the information,” Griffin says, explaining what it’s like to be non-fluent signers in a group of fluent speakers. “It can be very isolating.”

That experience made her a better coach. She learned how to remain calm, clear and focused, and the importance of being seen by all players when she communicates. “That’s great for hearing players too,” she notes.

She is uplifted by her players’ expressions of confidence in her. “They tell me, ‘You’re doing OK.’ I wish I heard that more often in the rest of my life!”

Her years with the deaf team led Griffin to reflect on many aspects of her soccer experience. “Think about teammates’ voices, pump-up music in the locker room. The national anthem. Those were so important to me. Now, I’m used to silence on game day.”

She loves seeing the national anthem signed. In fact, she says, every team everywhere should do that. After all, there are hearing-impaired fans at every match.

Griffin is known for one other thing: her fight against artificial turf fields. Since 2009, she has collected data about athletes (particularly goalkeepers) with cancer who played on crumb rubber fields.

She says, “The more I learn, the stupider it sounds to take carcinogenic tires that are not allowed to be burned or buried, break them into tiny pieces with much more surface area, then use them where kids play and inhale their dust.” She continues to be contacted by parents of athletes, and politicians. She always follows up.

But those fields are the only ones Amy Griffin stays away from. After a lifetime of playing and coaching soccer, she still gets an adrenaline rush from the game.

It doesn’t matter where, or what level. “Any place we can play is a good place,” she says. “Something cool happens there.”

youth
4 comments about "Amy Griffin on finding 'something cool' at various levels of soccer".
Read more comments >
Next story loading