Neither the USA nor Canada conceded a goal in their four games leading up to Monday's final to decide the region's first Olympic spot. Atrocious shooting prevented goals besides Alex Morgan's 78th-minute penalty kick for the 1-0 U.S. victory. For however frustrating the mistaken-ridden USA's performance was, its frequent attacks certainly wore down the offensively uninventive Canadians. The fitter, faster and more persistent Americans can feel deserving winners of a game that looked in danger of ending in a stalemate until Rose Lavelle was fouled in the penalty area. 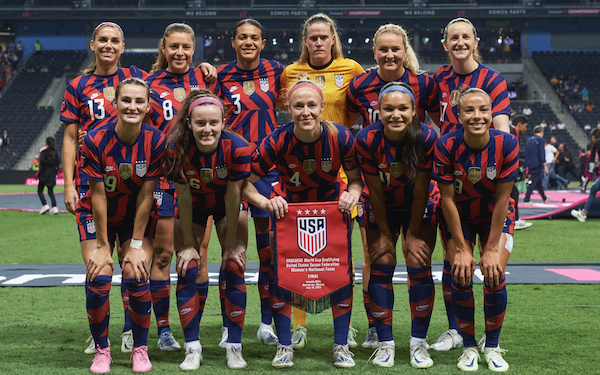 GOALKEEPER
The nadir of Alyssa Naeher's shoddy distribution came when she kicked a ball kick out of bounds. In the first half, she punched away a corner kick that flew into the center of the goal area. Her five saves came on non-threatening shots.

DEFENDERS
Right back Sofia Huerta got beaten early and often by Nichelle Prince and was lucky that Prince shot weakly in the 6th and 7th minute and Sophia Smith tracked back to intervene in the 17th minute. Huerta's defensive struggles seemed to drain her attacking confidence and she failed to connect well with the midfield or frontline until the 44th minute — when she set up Smith's super close-range chance. In the first half, Canada rarely tested left back Emily Fox. She struggled to attack for the USA down the left but passed smartly when unable to dribble through. Central defender Alana Cook fended off a Canadian attacker after a dangerous pass in the penalty area from Naeher and with Becky Sauerbrunn restricted Canada's attacks down the middle. Sauerbrunn, who won a couple headers late in the game, generally played it safe with short lateral passes but did spark an attack with a pass out of the back in the second half.

MIDFIELDERS
The midfield trio, perhaps unaccustomed to defending as frequently, misplayed the ball too often upon getting it to create a rhythm. Lindsey Horan, yellow-carded for a foul in Canada's half, shot wide, high and into defenders. Horan's highlight came when she stole the ball in the U.S. half, dribbled 50-plus yards and served up a major chance for Mallory Pugh. Like Horan's, Rose Lavelle's performance despite its many flaws was praiseworthy for its persistence. Lavelle over-hit a pair of corner kicks, lofted a cross easily headed clear when a low pass would have been much more lethal. But four minutes after she lost the ball in her own half, she darted into the penalty area and got clipped by the clumsy Allysha Chapman. Andi Sullivan mainly covered for the other two in her uneventful outing that ended on a high note when she cleanly robbed a Canadian in penalty area late in the game.

FORWARDS
It likely would have been a better game if Alex Morgan hadn't shot wide from 11 yards with plenty of time and lots of net to aim for after a pass from Sophia Smith in the 4th minute. The veteran center forward didn't break through for another shot until she converted her spot kick. Mallory Pugh should have finished at least one of her chances. She impressively dribbled from her own half in the 31st minute but shot down the middle, as she did when Horan set her up. Neither Pugh nor Smith crossed effectively and Smith like Pugh will rue not scoring at least once from her chances. They included a mis-play inside the goal area and a shot wide from inside the penalty area after she was set up well by Morgan.

SUBSTITUTES
Bringing in four subs starting in the 88th minute looked like a time-wasting maneuver, but they did help pin Canada down in its half for five minutes of stoppage time.

TRIVIA: The first game Canadian women's national team history was a 2-0 loss to the USA July 7, 1986 in Blaine, Minnesota. It marked the fifth game for the USA, which got goals by Marcia McDermott and Joan Dunlap-Seivold. Canada won a rematch, 2-1, two days later at the same venue, with Lisa Gmitter scoring for the USA.