Euro 2022: England's Lionesses come back from brink of elimination to move into semifinals 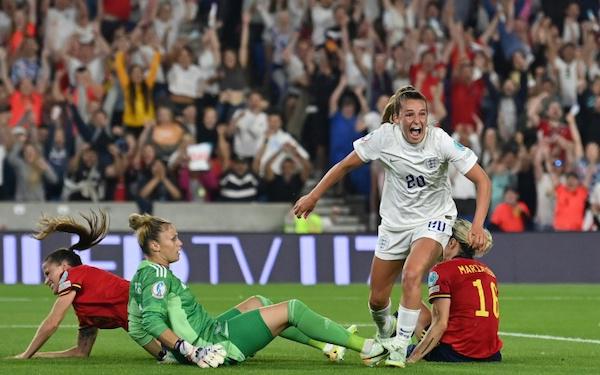 England rallied from the brink of elimination to beat Spain 2-1 in overtime and reach the semifinals of Euro 2022 thanks to Georgia Stanway's stunning strike.

Ether Gonzalez's opener had the hosts heading for an early exit, but Ella Toone rescued the Lionesses six minutes from the end of normal time before Stanway's winner took England into the last four of a fourth consecutive major tournament. Sarina Wiegman's team will face Sweden or Belgium in the final four on Tuesday.

England was given a boost pre-match with the return of Wiegman to the touchline after she tested negative for Covid-19 earlier in the day. The Lionesses had everything their own way in the group stage as they plundered 14 goals without reply against Austria, Norway and Northern Ireland. However, despite its own struggles to reach the knockout stages, Spain was a big step up in class.

"I won’t forget this day," said Wiegman. "A crazy day, I came with the team late, prepared, trying to stay calm. The whole game was a test. The level of this game was so high. I haven’t experienced that too much."

Spain had been pre-tournament favorites before injuries to reigning Ballon d'Or winner Alexia Putellas and all-time top goalscorer Jennifer Hermoso rocked their preparation. Jorge Vilda's side suffered its first defeat since 2019 to Germany in the group stage, but even in that game dominated possession of the ball.

Spain's ability to keep the ball off the hosts frustrated England and another sell-out crowd of 29,000 in Brighton for the vast majority of the first 90 minutes.
England has still never lost in now 18 games since Wiegman took charge in September. But the Lionesses have never come so close to defeat in that time and had to show admirable fight to battle back from a goal down.

"That just shows the level that we're at," said Stanway. "We get a setback and we come back and do it."

Wiegman did not waste time in turning to her bench with Ellen White, Fran Kirby and the tournament's top goalscorer Beth Mead surprisingly sacrificed for the introduction of Chloe Kelly, Alessia Russo and Toone.

"We were behind and knew we had to do something," added Wiegman. "We scored quickly after doing that so we could go back into our normal shape. The fans were behind us, you could feel it. This is home advantage."

Wiegman's changes had the desired effect to keep England's hopes of a first major tournament win in the women's game alive. Lauren Hemp's cross was headed down by Russo, the former University of North Carolina star, for her Manchester United teammate Toone to fire in from close range.

Suddenly, the momentum completely swung in England's favor and six minutes into overtime it led. Stanway drove forward before the Bayern Munich-bound midfielder smashed the ball past Sandra Panos from outside the box.

Aitana Bonmati came closest to a reply when she fired wide early in the second period of overtime. But Spain's wait to win a knockout game at a major women's tournament goes on.

international
25 comments about "Euro 2022: England's Lionesses come back from brink of elimination to move into semifinals".
Read more comments >
Next story loading