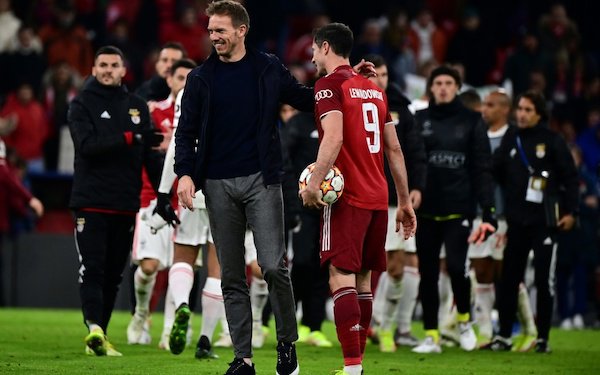 Bayern Munich coach Julian Nagelsmann said it is "crazy" that Barcelona have been able to make multiple signings in the transfer window, including Robert Lewandowski from the Bundesliga champions.

Barcelona has struggled financially in recent seasons, but was able to seal the signature of the two-time FIFA player of the year for 45 million euros ($46 million). The Catalan giants also signed Brazilian winger Raphinha from Leeds for a reported 55 million euros and have brought center back Andreas Christensen and former AC Milan midfielder Franck Kessie to the Camp Nou on free transfers.

"They bought a lot of players, I don't know how," Nagelsmann told a press conference in Washington during his side's pre-season tour of the United States. "It's the only club in the world that doesn't have money but can buy any player -- it's crazy to me. They're finding solutions. I don't know how, but yes, they have a better squad than last season."

However, Bayern club president Oliver Kahn said it was impossible to gauge the financial health of another club.

"I assume that Barca has accumulated a lot of debt. But the only ones who know the figures are those of the club itself," he said. "So we have to exercise some restraint when approaching the subject. They have to know what they are doing."

Lewandowski, whose contract was due to finish next year, had said in May "it is certain that my story with Bayern has come to an end". The 33-year-old Pole left the club after scoring 344 goals in an eight-year spell and netting more than 40 times in seven straight seasons.

"It was a good deal for Bayern," admitted Nagelsmann. "It's tough. He scored a lot of goals and was one of Bayern's big stars. But he would've left anyway, if it wasn't this season, it would've been the next one, so we would've had that challenge a year later and that's why the deal isn't so bad for Bayern."

It is not the first time Bayern have hit out at Barca.

Former club president Uli Hoeness said in June when Barcelona were interested in Lewandowski: "They are apparently financial artists who, despite having a lot of debt, apparently always find a bank to give them money to make such offers."

In March 2021, Barcelona said it was suffering from huge debts, cash flow problems and a large wage bill.

They have since spread out the debt, taken out a new loan from Goldman Sachs and signed deals worth several million euros, most notably with music streaming giant Spotify.