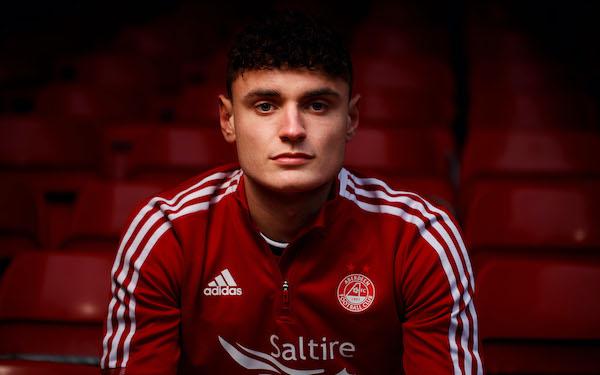 Last year, Dante Polvara, 22, wrapped up a storied career at Georgetown University that was filled with one accomplishment after another. In his freshman year, he won the national championship with the Hoyas. In his sophomore year, he was the Big East Midfielder of the Year. Then in his junior year, he won the 2021 MAC Hermann Trophy as the best player in NCAA Division I men's soccer.

After that, it was time for him to turn professional. With interest from teams in MLS and Germany, Polvara opted to sign with Scottish Premiership club Aberdeen FC last January. After three years of college success, the first six months of his professional career were a quick lesson in the challenging side of the pro game.

Shortly after Polvara arrived in Scotland, he needed surgery to repair a double hernia. While recovering, the coach who signed him, Stephen Glass, was fired as Aberdeen was having an uncharacteristically poor season.

When Polvara returned to the field, it was a far different situation than when he arrived. But part of what made him want to come to Scotland is that passion the fans have for the sport (Polvara pointing out: “it's all about football over here.”)

“I haven't seen the best of it,” Polvara told Soccer America. “I've seen a manager get sacked, a lot change in the club, I had a relatively long-term injury, and tough, tough losses. So unfortunately, it's not the very pretty side. ... But just being a part of those experiences, you see how passionate the fans are and see how much they care, and that's what makes you want to play.”

The 2021-22 season concluded with a whimper for Aberdeen as its final stretch of games came when there was no threat of relegation nor any hope of qualifying for Europe. It was during this time when Polvara was able to make his professional debut and finish with five appearances.

The current preseason looks promising for Polvara. He has already made two appearances in Scottish League Cup games against lower-tier opponents and on Sunday Aberdeen will host Raith Rovers for its final game before next week’s visit to reigning champion Celtic in the season opener.

The path that brought Polvara to this point mixed both old and modern pathways of American soccer development. He came through an MLS academy, as many top American players do right now, but he also played for his high school and then played in college – routes more common for previous generations. Born in Westchester County, just north of New York City, Polvara is the son of two immigrants from South Africa. As a child, Polvara spoke with an accent, which he has since lost. What hasn’t been lost, however, is his family’s love for the sport.

His father, who also has Italian citizenship, which has been passed on to Polvara, is a diehard Liverpool supporter. Together, Polvara and his father would watch the Premier League and Champions League on a weekly basis. On the field, Polvara progressed quickly. He was part of the New York City FC academy with other area standouts such as Gio Reyna, James Sands and Will Sands – the former two are both with the U.S. national team and are playing in Europe. Will Sands, meanwhile, is with the Columbus Crew and was also a teammate of Polvara’s at Georgetown.

When NYCFC first entered MLS, it changed a lot for these players who moved over to the well-funded academy backed by City Football Group. But Polvara also continued to play for his high school, Brunswick School, in Connecticut.

“I was very fortunate that NYCFC became a thing when it did,” Polvara said. “I always wanted an MLS team. I was always a little bit jealous of these guys would say they're part of MLS academies.”

“I managed to attend both preseasons with two different managers who both had so much experience by playing or managing around some of the best players ever,” Polvara said. “We never really had a mindset that we need to do whatever it takes to win. It was more let's play the right style of soccer. ... it was exciting to be a part of.

“I've watched MLS my whole life. So many of my best friends play in MLS. I love watching it and I love seeing where it's heading. It definitely is somewhere where I want to play one day.” 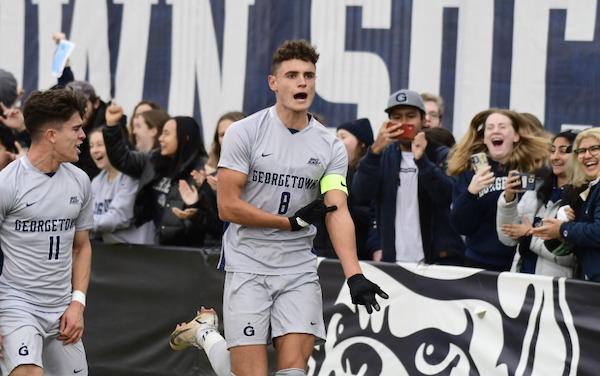 Unlike Reyna, who was seen as a national team player at an early age, or James Sands who was also a member of the U.S. U-17 World Cup team, Polvara was a bit of late bloomer. That turned out to be a massive win for Georgetown University and its head coach Brian Wiese.

“The one mystery was why NYCFC didn't take him — even as a development player or as player stock,” Wiese said. “It didn't make sense to me why they didn't, although their philosophy is a little different. They made a decision on him at 16 and when he was at the level at that time, they moved past it. But they didn't recognize that players get better between 16 and 21."

For Polvara, his explanation is that he was just not ready for the professional game just yet. Even in recent years, the professional success of players such as Daryl Dike, Miles Robinson, Tajon Buchanan and Jordan Morris shows that a stint in the collegiate game can still lead to a pro career.

“Not everyone's ready at 16 to play professional,” Polvara said. “Even if at 18, right before I went to college, had I been offered a professional contract, I don't think it would have made sense. I knew I wanted to play pro, but some guys mature later. I just simply wasn't ready. College for me gave me the freedom to learn a lot about myself.”

At Georgetown, Polvara simply took off and during his junior year Weise said he “fielded a lot of calls from MLS teams,” but Polvara wanted to pursue a career in Europe for a multitude of reasons both on the field and off the field. Growing up in an international household with regular trips to South Africa, he wanted to live overseas.

But the offer needed to be right. He didn’t want to engage in the “loan army” pathway where he would sign for a big club and then move around for years. He wanted to find a club who he could play for – and Aberdeen was the best fit.

“Out of college, it's tough to get European opportunities,” Polvara said. “Some things need to fall your way…. Also, as a young person, I've always wanted to travel the world and I never would have thought I'd live in Scotland at some point in my life… but I didn't want it to be a situation of signing somewhere just to be loaned. I wanted to go somewhere where I felt they needed me for something or that they had some sort of plan. And essentially that's what Aberdeen came along with.”

One of Polvara’s best friends on Aberdeen is fellow American Christian Ramirez, who is Aberdeen’s starting central forward and was the team’s leading scorer last year with 16 goals across all competitions.

Ramirez, 31, is nine years older than Polvara and has also served as a mentor to his younger countryman. Ramirez is optimistic for Polvara’s chances for a breakout season in the year ahead.

“Dante has done really well,” Ramirez said. “He has a lot of potential and has quickly gotten up to speed as a professional. He has the capabilities to establish himself as a top box-to-box midfielder as he gets more games under his belt.”

But for Polvara, that opportunity to finally prove what he can do professionally should be coming in the weeks ahead in the early part of the season.

“Expectations for me are personally higher,” Polvara said. “I've never really been satisfied with whatever the situation be. Starting those three games at the end of the season, it just makes you even hungrier right now with the commitment to want to be in the lineup, week in and week out.”