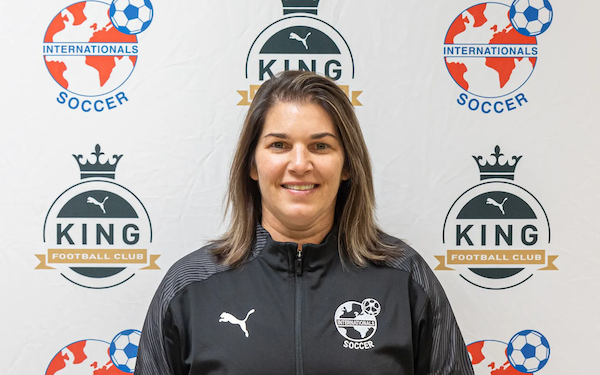 Years after making their mark on the field, women are striding into the coaching, administrative and business ends of soccer. They direct clubs, own facilities, and train national teams.

Actually, all those jobs are on the resumé of the same woman. Keri Sarver juggles several roles: club and ECNL director for Internationals SC; owner of the Pinnacle Sports indoor/outdoor complex (both in northeast Ohio), and – half a world away – assistant coach for the New Zealand women’s national team.

What ties them all together, besides a round ball?

She names several. One is Zdravko Popovic, the Internationals founder who trained Sarver when she was young, encouraged her to begin coaching while still in high school, and now works alongside her (she’s a part owner of the club).

Another mentor, April Heinrichs, coached Sarver in the Olympic Development Program, brought her on as an assistant U.S. national youth teams coach, then helped her become head coach of the U-19 women’s squad.

A third is Jitka Klimkova. The New Zealand women’s national team head coach worked with Sarver in the U.S. national team program and at Internationals, and brought her into the “Football Ferns’” staff.

Sarver has roamed far from home. But she’s always retained her Akron-area roots. As a player with Internationals, she was exposed to Northeast Ohio’s large group of eastern European coaches and players. Some formed their own clubs. Over the years, they grew and merged. Yet Internationals has stuck to its own path. With 350 players, it’s one of the smallest in the ECNL.

“We’ve kept the family atmosphere,” Sarver says. “Players and coaches share passion, love and respect. We take care of each other. We’re all about long-term player development. Success and winning are just by-products of that.”

Success is measured by the older teams. Internationals’ girls emerged from the pandemic with all six teams in the U-13 through U-19 age groups advancing to the Champions League playoffs. One reached the semifinal, another the quarterfinals, a third the round of 16.

Internationals emphasize a “consistent approach, even when the soccer landscape changes.” But the club continues to evolve. During and after the pandemic, they’ve added the mental health of players to the technical and tactical aspects of their curriculum. 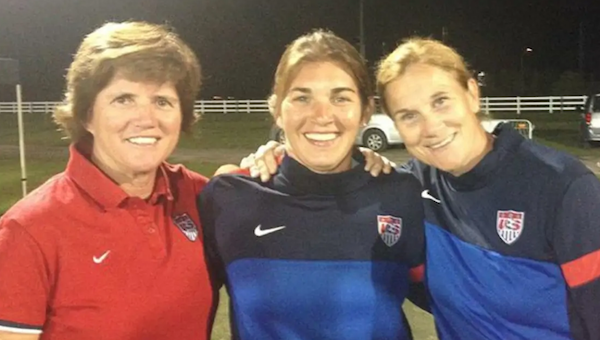 Keri Sarver (flanked by April Heinrichs and Jill Ellis) served as U-19 women's head coach and assistant coach of youth national teams including the U-20 World Cup team.

Sarver has continually evolved as a player and coach, too. After graduating from the University of Maryland in 1999 with a degree in computer science (and, in 2002, selection to the ACC’s 50th anniversary team), she played professionally for the Washington Freedom, New York Power and Carolina Courage. She also earned a USSF “A” license and NSCAA director of coaching diploma. She has also served as an University of Akron assistant coach.

With all that, owning Pinnacle Sports is one of her biggest challenges. She purchased the business a year and a half ago. It provides a home for the Internationals – a game-changer for a soccer club – but it means Sarver deals with basketball, volleyball and kickball teams and leagues, along with indoor and outdoor turf, roofs, insurance, weather, and countless other issues.

She follows her Internationals philosophy at the sports facility: “Stick to the values that work.” Whether hiring staff or deciding that a proposed event does not fit in with Pinnacle’s vision, Sarver tries to keep the long-term interests of her business in mind.

Running a soccer club and sports center consume most of her time. But when Klimkova asked her to join the New Zealand staff, she never hesitated.

Sarver had been Klimkova’s assistant when they took the U.S. U-19 women’s team to play Down Under, and was captivated by New Zealand’s spectacular landscape and welcoming people.

She has not been back since her appointment. Because of COVID, the team has played only away matches, in places like South Korea and Australia. “I get a lot of work done on planes,” Sarver says. “And travel is OK, because you know why you’re going. The opportunity to coach a group like this is very special.”

This past February, Server traveled to Carson, California, where New Zealand and the USA met in the SheBelieves Cup.

Coaching for another nation on American soil was “unique,” Sarver says. “I am a very prideful American. I have many great experiences with and connections to U.S. Soccer, so I was not sure how I would feel. The playing of the anthems was the most surreal moment.”

She sang both the U.S. and New Zealand national anthems with pride. After her first tour, she had learned both the English and Maori versions of the latter, “due the amount of respect I have for the players, staff, and culture of New Zealand.”

As a female club coaching director, a sports business owner, even a national team coach, Sarver is still in a minority. She’s seeing more women in key ECNL roles, but does not know of any other club owner. She believes she is the only female sports facility owner in the Akron area. However, she says, “I grew up with three older brothers. I was a software engineer right out of college” – another male-dominated field.

“At the end of the day, whether you’re a man or a woman doesn’t really matter," she says. "If you do a good job, and treat people with respect, that’s all that counts.”