John Dorn: Paving pro pathways and mentoring for diversity in the 'beautiful soccer community' of Illinois 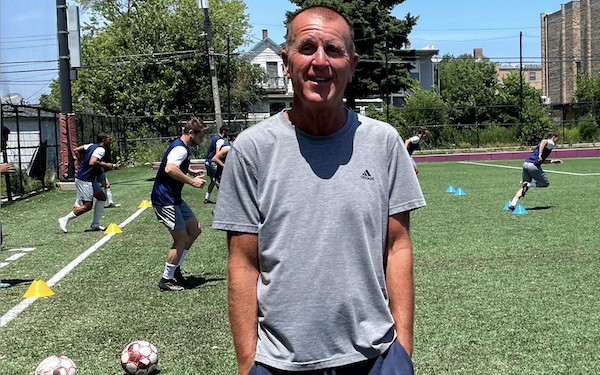 John Dorn is as competitive as any other USL League Two owner. But he did not care who won last Friday’s league playoff match between Chicago FC United and Peoria City.

He owns both clubs.

Chicago – the more established team – downed the first-year down-staters 3-1 in the Central Conference playoffs, and advanced to the semifinals against Flint City Bucks.

But both clubs can call 2022 a success. Chicago won the Heartland Division with a 12-1-2 (W-L-T) record, and made the playoffs for the fourth straight year. Peoria ended its inaugural campaign 6-4-3, good for second place in the Deep North Division.

The Chicago native – a former high school, club and college player and coach – has been involved with soccer in the city for more than two decades. When he left a job in finance at age 39 to return to his “first love,” he worked with the MLS Fire as director of its U-23 Professional Development League program, More than 100 players progressed to the pros in the program’s first 10 years. He then became director of player development for all Fire programs below MLS.

In 2017, Dorn began working with FC United. The youth club joined the PDL, now known as USL League Two. The 113-team league – split into 16 regional divisions, across four conferences – is a showcase for current college and exceptional high school players. Players are not paid, so they retain eligibility to compete collegiately and scholastically. Josh Sargent, DeAndre Yedlin and Brad Guzan all have USL League Two experience. 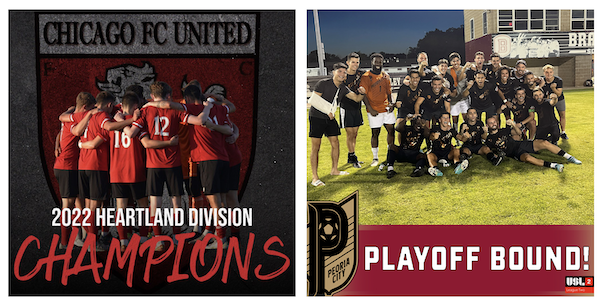 In a city known for its many successful professional sports franchises, running a USL team like FC United is not easy. Despite free admission, there are few fans. That’s fine, Dorn says; the focus is on player development.

It’s different in Peoria, a city of 112,000 about 60 miles south of Chicago. The main sports attraction has been Bradley University. But with plenty of youth and amateur teams and leagues, Dorn felt Peoria was primed for a soccer club.

Attendance this season ranged from 500 to 1,400. “The whole town was behind us,” Dorn says. “This is what a minor league summer team should be.”

The Peoria City-Chicago FC United clash would be “surreal,” Dorn said a few hours before kickoff. “I’ll sit in the middle. It will be like watching two of my children playing against each other.

“Twenty-one years with the Chicago project means a lot to me. But for a first-year club to be in the playoffs is huge, too. I would hope for a tie, but this is a knockout game. So I’m guaranteed that one of my teams will get through.”

Soccer has been good to Dorn. “I’m a grinder, a lifer. If they told me tomorrow I could only be the equipment manager, I’d do it.”

Yet now he’s giving back to the game in a way that has nothing to do with owning a pair of USL steams. By coming out fully as a gay man over the past few months, he’s served as a role model to others in the soccer world.

Support has been “overwhelming,” Dorn says. He spent years compartmentalizing his life: his professional career; his gay friends; his large family that included many athletes and coaches.

Over time, he said, “I realized I’m gay. I’m masculine. I work in sports. None of those define me solely, but they’re all part of who I am. I’m proud of that. And the love and support I’ve felt make this a very happy time for me.

“This is a beautiful soccer community. I’m blessed to be in this sport."

Chicago FC United's 2022 season ended with a 2-1 loss to Flint City Bucks in the conference semifinals.

"I wanted to win a championship," he said, "but I still feel like a champion. Being able to be out, and be a mentor for diversity, looking people in the eye as who I am, is rewarding. And very humbling.”
college men, usl, youth
Next story loading