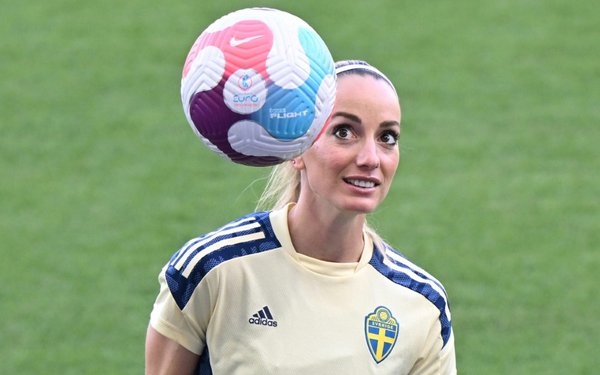 Sweden forward Kosovare Asllani described the use of fewer cameras for VAR calls at Euro 2022 as a "catastrophe" on Monday after being on the wrong side of a series of tight calls so far in the tournament.

The Swedes, who face hosts England in the semi-finals on Tuesday, have had four goals ruled out by VAR reviews for offside with serious doubt over at least two of those decisions.

Sweden reportedly reached out to UEFA after Rebecca Blomqvist's goal in a 2-1 win over Switzerland in the group stages was wrongly disallowed. Blomqvist appeared to be behind the ball when played through, but the VAR official drew the offside line from the last Swiss defender.

Stina Blackstenius' strike against Belgium in the quarter-finals was also ruled out despite replays suggesting the Arsenal striker was onside.

Asllani took aim at UEFA for not implementing the same level of technology as they did for the men's European Championships a year ago.

"It is a catastrophe to use 50 percent less cameras than for the men's game," said the AC Milan player. "The decisions can't be made with the same precision. There are situations where you should have more cameras. It can be decisive."

Sweden coach Peter Gerhardsson said it was "unacceptable" for a women's Euro not to have the highest standards of technology.

"I think it's strange," said Gerhardsson. "I like VAR. I think it's fair when they have it, but we have one game where they make mistakes because they draw the line on the wrong side. Now what we heard they have not the same cameras and for me it is not acceptable in the Euro."

Despite those setbacks, the No. 2 ranked team in the world have still been strong enough to reach the last four. But defender Magdalena Eriksson believes they face a step up in class when they take on the Lionesses in front of a sold out Bramall Lane in Sheffield.

"This will be our toughest game so far, it’s the best team we are going to face but we are so ready for this," said the Chelsea center back. "This game is what we've been dreaming for. We will do everything we possibly can to reach that next stage."

England has reached the semifinals for a fourth consecutive major tournament, but has lost all three of those previous semifinal matches.

Sarina Wiegman was not in charge then as she is unbeaten in 18 games since taking charge of England in September. And the Dutch coach, who led her homeland to victory at Euro 2017, sees no reason to reflect on past semifinal pain for the Lionesses.

"There is no use to talk about the other semi-finals, we are in the now," said Wiegman. "The England team is ready to play the best game against Sweden tomorrow and, hopefully, we make the nation proud."

Sweden will be boosted by the return of Hanna Glas and Emma Kullberg after they missed the quarter-final over Belgium with Covid-19. Jonna Andersson is still ruled out by Covid-19, while captain Carolina Seger faces a late fitness test.