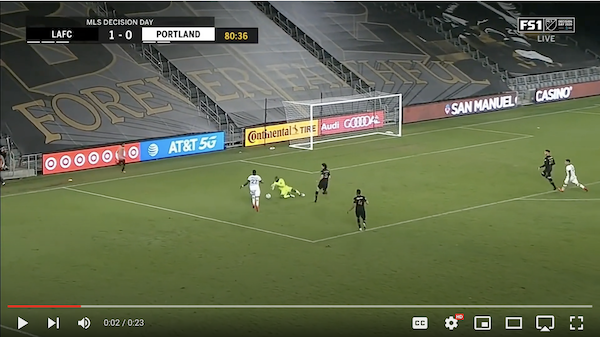 A rather unpleasant article popped up recently on the website run by PRO — the group that represents the referees engaged in professional soccer in the USA. It is the official voice of the MLS referees, and the article I refer to deals with four incidents from MLS games.

Not only unpleasant, but more ominously, fallacious. It is headed “Avoidable contact with goalkeepers.” We are given four examples — with video backup — of attacking players deliberately injuring goalkeepers. The anonymous authors (there is a group of them, I gather) may deny that they are alleging intent. But the descriptions of all four incidents will support no other view.

Incident No. 1: "the attacker does not retract his foot, but rather keeps his foot extended to make contact with the head of the goalkeeper with his studs."

Incidents No. 2 and No.3: “the attacker ... does not try to avoid making contact, but rather keeps his foot low and makes contact with the head of the goalkeeper."

Incident No. 4: "the attacker ... not only does he leave his foot in, but he also deliberately opens his leg[s] to ensure that he makes contact with goalkeeper’s head."

No qualms there. "Off with his head!” is the verdict, given after an almost spitefully anti-attacker analysis, and briskly delivered with the words “The attacker should be sent off for violent conduct."

The expert group has fingered four MLS players who they are satisfied will not hesitate to inflict a serious head injury on a fellow professional.

Unpleasant, no? I’m finding it very difficult to believe. It would be easy enough, should the PRO experts be interested, to put together a series of tapes showing attacking players simply pulling out of such incidents before they happen, failing that is, to go through with a legitimate challenge for fear of injuring the keeper (and, no doubt, because they know that if there is an injury, they will be blamed for it). There will be many more examples of these aborted challenges than of the villains that the experts are so keen to discover.

I have not bothered to find out whether the offending attackers were, in fact, red-carded. What matters is simply that the PRO website is ruling that they should have been. That, then, must be the official PRO position.

And it is wrong. Not merely wrong, but calamitously and dangerously so. PRO should be ashamed to be so mindlessly adopting such a position.

But the people at PRO — who must surely qualify as intelligent persons — have apparently not spotted the danger. Nor have referees in general. Nor have soccer’s rule-makers at the hopeless IFAB.

Bad enough. But it gets worse, much worse. Where have all those key people been for the past decade or so? Is it conceivable that they are all unaware of the growing concern about head injuries in sports, of the mounting evidence that concussions must be taken very seriously?

Apparently they have indeed all been asleep. How else to explain that they have left intact in their sport this phase of play that almost encourages head injuries to goalkeepers?

And, would you believe it, things do manage to get even worse. We’re hitting rock bottom now ... because soccer, especially its rule makers and its referees, has been blatantly contravening its own rules in allowing goalkeepers to dive at the feet of opponents.

Rule 12 (officially known, with due pomposity, as Law XII) tells us that:

“An indirect free kick is awarded if a player ‘plays in a dangerous manner.’” It used to be called “dangerous play,” and it’s been in the rulebook since at least 1891. Some years later — during my early soccer days — we were told about it and the example we learned was that of a player stooping low to head the ball. Lowering your head down to where the feet belonged was dangerous play even though the danger was to the player who committed the offense: he ran the risk of getting his head kicked off, but the free kick (indirect) went against him. Of course, we all felt pretty smart about knowing this counter-intuitive but very sensible rule.

What we did not do — and no one has done since — was to apply the rule to goalkeepers. If a head lowered to waist level is dangerous play, how can a head down among flying feet at ground level not be even more, much more, dangerous?

This is how the current rulebook, on page 101, defines the offense: “Playing in a dangerous manner is any action that, while trying to play the ball, threatens injury to someone (including the player themself) and includes preventing a nearby opponent from playing the ball for fear of injury.” A definition that specifically underlines that the player committing the offense may be the one who gets hurt.

The point needs no discussion. When a goalkeeper dives at an opponent’s feet he is guilty of playing in a dangerous manner. Big time.

Which thoroughly destroys PRO’s arguments against what it sees as deliberately dirty play by attackers. The guilty party in all their examples is the goalkeeper. Guilty of playing in a dangerous manner. He is the one who introduces the “dangerous” element into the play.

Yet ... the goalkeeper’s guilt is excusable. He is diving at feet because referees allow this. So the referees are guilty? Partially, yes. The ultimate guilt, of course, lies with the ultimate authority, FIFA and its pathetic rule-making body IFAB.

The incidents condemned by PRO could be banished from the game overnight. No change to the rulebook is needed. Just a simple reminder from FIFA that referees are to enforce a rule that is already in the rulebook, and has been for decades. The rule against playing in a dangerous manner.