Risky move pays off for Sam Rogers in Norway 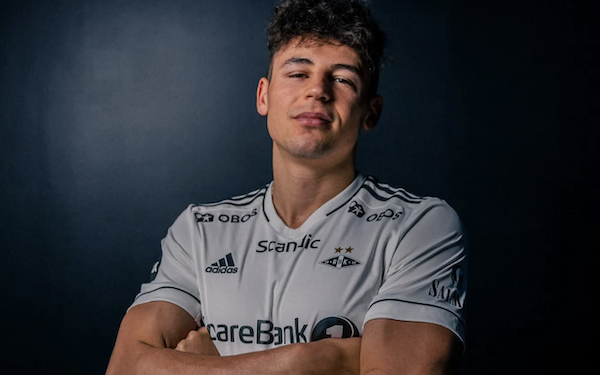 The development of soccer players is not linear.

Most players eventually find their level but there are so many factors that determine when and how a player will progress -- and talent is just one component.

On the field, there is also finding the right environment and the right coaches. Off the field, players must mature mentally and emotionally while being able to deal with setbacks and criticism. With all these factors involved, not all players are going to see their careers take off in their teenage years.

Sam Rogers, at age 23, is finally seeing his career take off. He is a regular starter and a key player for Rosenborg BK, historically the most decorated team in Norway with 26 league titles, 12 Norwegian Cups, and more appearances in UEFA tournaments than any other Norwegian team.

But the path that led him to Norway was not an easy one. A product of the Seattle Sounders academy, near where he grew up, Rogers never made the jump to the first team. He went on various trials early in 2021 with teams in Europe and within MLS, but eventually he signed with OKC Energy in USL.

After only a few months with OKC, Rogers had the opportunity to join HamKam on loan. Normally a loan to a team in the second tier of Norway isn’t a big move, but the stars aligned for Rogers. HamKam was on top of the table but despite the success, Rogers eventually found his way into the starting lineup.

Rogers made such a strong impression at HamKam, Rekdal was able to secure a transfer to bring Rogers with him. Rosenborg paid nearly $1 million for the American central defender – a high sum in Norway.

“When I arrived at HamKam, I had a lot to prove,” Rogers told Soccer America from Norway. “I just went into it to push myself and the team was already in a good position. I just wanted to help improve that and continue how the team was doing. I performed well and helped achieve promotion. I think being available for the matches and the performances, it was a way for the coaches to be able to trust me and know what they're going to get out of me. That's the best thing you can do.”

“When they moved to Rosenberg, that was just something I wanted to follow them with because, the talks we had and the trust we had and I think it was just mutual respect,” he added. “That's something that I think any player would want to continue to go for.”

The path to Rosenborg was not the result of a direct upward trajectory. In fact, it took bold decision-making that involved risks. The second tier of the lower Scandinavian leagues is often a dead end for American players in their career and Rogers understood that.

But after seeing his time with Seattle end without making the first team, he wanted to make a jump out of USL with Oklahoma City as quickly as possible. He wasn’t happy with where his career was at and HamKam seemed to offer a glimmer of hope.

“I just didn't see my career taking off because I thought things would work out better for me before last year,” Rogers recalled. “Ending up like in the situation I was in was frustrating and disappointing for my goals in my career. In making the move to Hamkam in Norway last year, I saw it as an opportunity to go to a team that could get promoted. In Europe, people from leagues all over in every country watch everywhere. If I can go and perform, maybe, people see me and it could lead to opportunities that couldn't have opened up if I was still in the U.S. playing in the USL. It was definitely a risk.”

The risk indeed paid off. Since Rosenborg bought Rogers, he has been a staple in its starting lineup. With a three-man backline, he was initially on the right side but last month made the move to the left side after he impressed following a halftime tactical adjustment.

His best moment came on July 10 when he netted a hat trick in a 3-2 win over Jerv. As a central defender, goals typically are few and far between, but Rogers now has four on the season.

“I've never scored two goals in one game before,” Rogers said with a laugh. “And you got three as I mean it was pretty crazy, to be honest. The first one was like, Oh, good goal, a good header. And then the second one, right before half time, I was just kind of like: right, place, right time. And then everyone at half time saying like: you got to get another. And obviously I'm going like -- yeah, I'll try, whatever. And then I got another chance and I had a good flick and it went in and it was just like -- Oh, I actually did that. It's pretty crazy.”

But Rogers has an important role with Rosenborg. Despite the club’s historical dominance in Norway, it hasn’t won the title since 2018 with clubs such as Bodo/Glimt and Molde dominating in recent years. But Rogers indicates that his career has been linked to high expectations – whether with Seattle or with HamKam and he is well aware of what the goals are with Rosenborg.

“The standard here and the expectation is very high," he said. "The club hasn't won since 2018. Historically, that's a long drought. Obviously with new coaches and the team is very different. But the standard is still there. Everyone in the club obviously wants to win and the players want to win.”

While it was just last year when his career was at a low point, Rogers is enjoying soccer again on and off the field. At Rosenborg, he is the team’s only American and many of his teammates are his age. He enjoys life in the country and his teammates are intrigued by his background. Few of them have ever been to the United States and they are always asking about how life stateside compares to what they see in movies. They also ask about MLS, and other sports leagues like the NFL, NBA, and MLB and Rogers enjoys engaging them.

But looking back, Rogers never doubted that he had the ability to succeed at high levels. For him, it was a matter of working through low points, taking risks, and seizing opportunities when they presented themselves.

As for his future, Rogers is optimistic although he insists his goals remain the same. He is simply in a better position to achieve them. Continued success at Rosenborg, however, should open more doors both at the club level and perhaps with the national team – which will start a new cycle next year.

“I think the goals for me are still all the same,” Rogers said. “Even last year, I had the goal to play in Europe, play for the national team, play in the Champions League. Now I'm just back to a place where it's still alive for me. I'm playing at the level that I thought I should be playing, in my opinion, years ago. I don't have a time frame because I've learned in football there's no reason to ever set a time frame because almost never happens when you think it will. But if I stay on the path that I'm on and perform the way I'm supposed to perform, that all those doors will open when they're supposed to -- but I'd rather it happens sooner.”