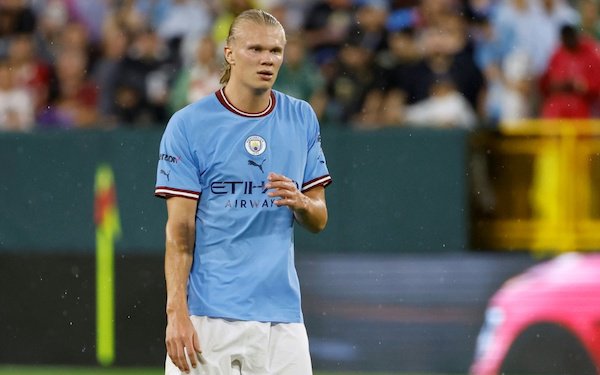 Heading into Saturday's curtain raiser to the Premier League season, the pressure is on Haaland and Nunez to provide evidence they can justify their hefty price tags over the coming months.

The pair represent over £100 million ($121 million) of goalscoring firepower as the rivalry between City and Liverpool intensifies.

Much has changed at City and Liverpool since Pep Guardiola's side pipped the Reds to the title by one point after a thrilling come-from-behind victory over Aston Villa on the last day of the season.

City's fourth title in five seasons was just reward for City's incredible consistency, but Guardiola's perfectionist personality ensured he would not rest on his laurels.

Guardiola sanctioned the sales of Gabriel Jesus and Oleksandr Zinchenko to Arsenal, while Raheem Sterling joined Chelsea and Fernandinho returned to Athletico Paranaense.

Aware that City's success last season was achieved despite its lack of a natural central striker, Guardiola made a blockbuster move for one of Europe's brightest young stars as he landed Norway international Haaland from Borussia Dortmund for £51 million ($62 million).

Having failed to prise Harry Kane from Tottenham's clutches 12 months ago, Guardiola hopes Haaland can emulate his prolific form at Dortmund in the more demanding Premier League.

The 22-year-old's ability to mesh with City's array of creative talents is one of the key storylines that will define the title race. The early signs are promising as Haaland took just 12 minutes to score on his City debut in a friendly against Bayern Munich.

"As you probably all know, I've been watching a lot of City games for the last years," Haaland said. "The last years (they) have been without a striker, so of course I've been seeing myself in these kind of situations. I'm not surprised. The quality is good."

While City will start the season as title favorites whatever the result this weekend at Leicester's King Power Stadium, Liverpool's threat to its supremacy remains clear and present.

Jurgen Klopp's team came within two games of soccer immortality after spending the second half of the season engaged in a thrilling chase to win an unprecedented quadruple.

With history in touching distance, Liverpool fell painfully short as City won the title before Real Madrid beat them 1-0 in the Champions League final. Beating Chelsea on penalties in the FA and League Cup finals was scant consolation for a manager with Klopp's ferocious drive.

The months since that agonizing finale have seen Liverpool finally end speculation over Mohamed Salah's future by tying the Egypt star to a new contract. The departure of Sadio Mane to Bayern Munich was a blow, but Klopp filled the void left by the Senegal forward when he paid an initial £64 million ($75 million), that could rise to a club record £85 million ($103 million), to sign Nunez from Benfica.

Nunez, 23, has endured a rollercoaster pre-season, with an embarrassing miss against Manchester United followed by a four-goal demolition of Leipzig, then a blank in a defeat against Salzburg.

Premature comparisons will inevitably be made between Haaland and Nunez this weekend.

But Klopp was quick to defend the Uruguay striker, saying: "He needs much more support around him. You keep other players busy so they cannot focus on him. It is like it is, it doesn't feel great, but we take it and go from here."

Victory in the Shield will be a footnote when the major prizes are handed out at the end of the season, but Klopp knows the psychological significance of any win over England's preeminent force.