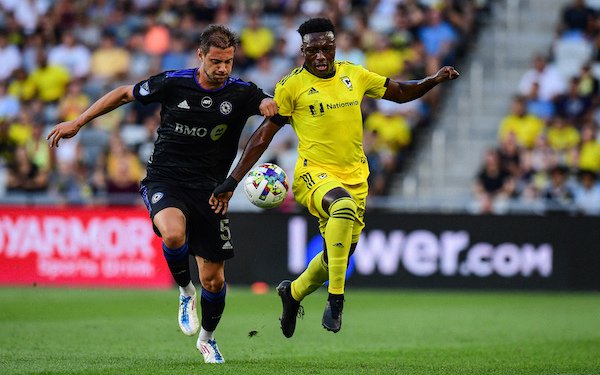 CF Montreal  got goals from Kei Kamara in the 88th minute and Joel Waterman in stoppage time to rally for a 2-1 win at Columbus in a match interrupted almost 90 minutes due to thunderstorms in the Columbus area.

The win moved Montreal into sole possession of third place in the Eastern Conference with 39 points after 23 games. The loss was the first in 10 games for the Crew, which remained in sixth place but only one point ahead of Charlotte FC and Inter Miami, which both won on Wednesday night, and FC Cincinnati. Two teams -- Chicago and New England -- are two points further back.

"I'm not surprised at what we did," he said. "It was the first time that my staff and I had a stoppage because of thunderstorms while we were dominating so thoroughly, and we told ourselves we were going to win this match at the restart, and we did it. That's us, we're like that."

Montreal is Kamara's eighth stop in an MLS career that began in 2006. He did not play in 2021 and said he did not know Di Tullio personally.

"It’s amazing for players to have that heart," he said, "for kids like Ismaël [Koné] and Mathieu [Choinière]. I could see the connection they had with him. May he rest well, I can’t wait for us to return to Montreal and keep celebrating him like the champion he was.”