Cedric Cattenoy on creating pros in Chicago: family trust, a holistic approach, and allowing for mistakes 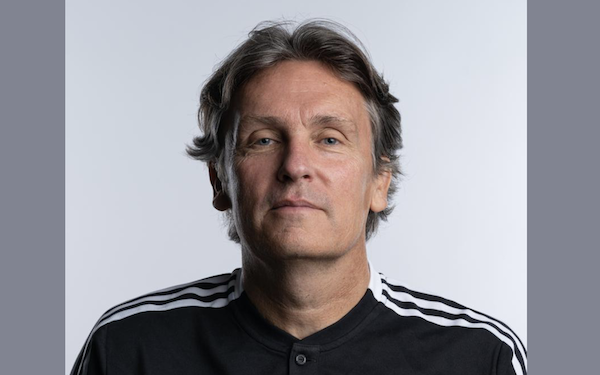 Cedric Cattenoy has run the Chicago Fire academy since he joined the outfit in 2015, when he was given "a blank slate" to oversee a revamp of the Fire academy. The Chicago Fire squad that won the the inaugural MLS Next Cup U-19 title in 2021 included Golden Boot winner Brian Gutierrez, who has by now appeared in 45 MLS games, and Golden Ball winner Sergio Oregel, who signed his Homegrown contract last October and was recently called up to the U.S. U-19s along with Fire defender Justin Reynolds. Cattenoy grew up in Villepinte, France, a suburb 11 miles east of the Paris city center. He coached within the Paris St. Germain academy for 15 years and while it developed more than over 80 professional players, including Bayern Munich's Kingsley Coman, Paris St. Germain's Presnel Kimpembe, and Juventus' Adrien Rabiot.

Within the last three years alone, the Fire has signed a dozen academy players to Homegrown contracts, including Gaga Slonina, who was transferred to Chelsea (and loaned back to the Fire for the remainder of the 2022 season).

SOCCER AMERICA: Do you have a first memory of playing the game?

CEDRIC CATTENOY: Oh, yeah, well, wow. You know, Arlo, I'm 51 years old, so I have to go back. But yeah, I played in my neighborhood when I was 8 years old. Every day we met with all of the friends and we played. That was my first soccer experience.

When I was 10 years old, I joined the city club, plus the football outside of the club. Because that was our passion and we spent a lot of time playing. At this time we didn't have a phone, a playstation, FIFA [video game], football was the ...

SA: Who was the first coach that really influenced the way you saw and played the game?

CEDRIC CATTENOY: The first one, I will say, was not positive. Every training session was the same session. We had to run around the field 10 times. After that, abs and core work — very old school. After that was a shooting session and then a game. Before coming to the session, you knew exactly what you were going to do. That was boring.

But when I joined FC Villepinte, the technical director was our coach and his approach was more professional. I learned a lot from him. He was my first real experience. When I was a coach, I met at Paris St. Germain, Bernard Guignedoux, and this guy influenced me a lot as a coach.

[Editor's note: Guignedoux is known for being the first goalscorer in the history of Paris Saint-Germain. After retiring from a 10-year pro playing career, he was involved in Paris' academy setup for more 20 years. He died in January of 2021 at age 73].

SA: What made you want to be a coach?

CEDRIC CATTENOY: When I was in the east suburbs, the club [Villepinte] was very important. That area was — if you don't have a framework or support from your parents — you can do crazy things. The club was like my second home. When I was 14 years old, I was a player but started to work with the little kids. The experience gave me patience early on and I knew I wanted to stay in the football industry.

SA: Why did leave Paris St. Germain for the USA?

CEDRIC CATTENOY: I had a goal in my life to work abroad. When I was 45 years old I thought that'd be the best time to achieve that goal.

I was in a comfortable situation at Paris St. Germain — I had a good job, a good reputation, and I was lucky because I worked with top players. During my time at PSG I was involved in the development of over 80 players who became pro. Including Adrien Rabiot, Kinglsey Coman, Mattéo Guendouzi [Marseille], Ferlan Mendy [Real Madrid], Presnel Kimpembe [Paris St. Germain]. They all now play for the French national team.

I was lucky because when you work with these kinds of players you know exactly what the high level looks like.

So I visited Chicago then and I loved the city. American people are very nice. When I wanted to work abroad, I said maybe Chicago is an option. I knew Pascal Bedrossian [former Fire player and academy coach] and when a position opened up in 2015, we had the discussion and I took the job.

I was really excited because the goal was to develop a successful academy and I started from as blank slate. That was exciting for me because I could implement all of my ideas, in terms of development. That was a great challenge. 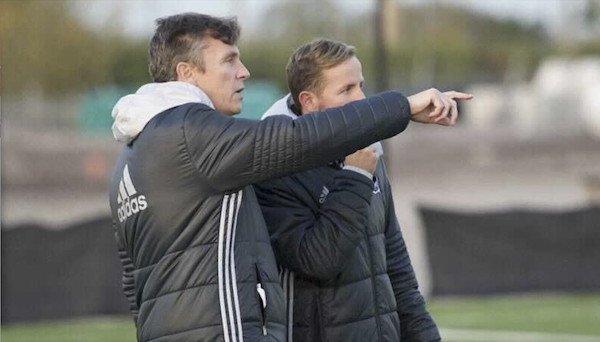 SA: Being a part of the PSG academy for almost 15 years. ... I’m sure you learned a ton working with some of the most exciting young prospects in the world. What were your biggest takeaways, as a coach, from your time there?

CEDRIC CATTENOY: As a coach? Whatever the player, if you want success with him and you want him to become a pro, you need to be on the same page as the family. You need to have a partnership and the family must trust the club and the process. And the club must believe in the family. That's the first takeaway.

SA: Starting Chicago Fire's academy with a blank slate, what were your top three priorities upon arrival?

CEDRIC CATTENOY: The first priority was to hire coaches. That was difficult because I didn't have any network. I was new in the country. I received a lot of resumes and I had to select just a few.

To start the hiring process I put in a three-step process: If the resume was interesting, the first step was an interview on the phone or in person if the coach lived in Chicago.

The second step was to watch them run a session. Because for me, you can have a good interview, but the truth is on the field.

The third step was a discussion on the session. That was an opportunity for me to see if the coach was open-minded. That was very important.

The second priority was to put in place the game model. The way we want to play, of course, requires time, but it was a priority because based on the game model you're going to select and recruit the players who will fit the way you want to play.

At the same time, based on the game model, what kind of coach do you want? So that was important.

The third priority was to create a positive learning environment during the training session. An environment where a player can make mistakes — mistakes are part of the process. A lot of kids put a lot of pressure on themselves and sometimes it's difficult for them to make a mistake. But mistakes are part of the process — if you don't make a mistake you're not going to improve.

SA: What is the biggest challenge facing the Chicago Fire academy when it comes to developing pros?

For the coming season, we will have the U-17s doing online school. That will allow the players to train more. We will have more training sessions — six a week — plus some weight room sessions. That will give the players a better life load, because when you train in the evening, the time you need to go back home, to shower, to do homework, to eat and go to bed, then you have to wake up early the next day. So it's tough. With the U-17s next year, it will be much better. 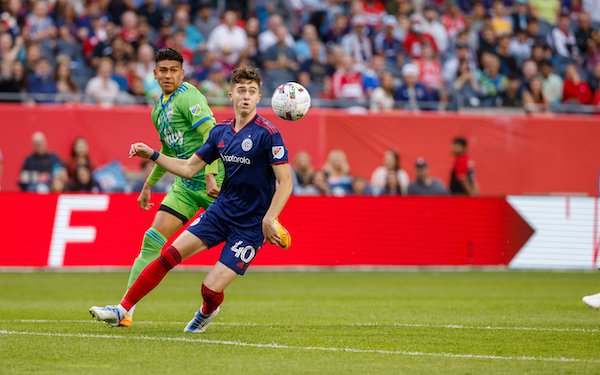 The 19-year-old Brian Gutierrez joined the Chicago Fire academy in 2015 and signed a Homegrown contract in March 2020. He has made 22 appearances (12 starts) this season so far, with one goal and four assists.

SA: There are debates in American soccer about the utility of coaching courses and coaching degrees. Some say coach licensing is prohibitively expensive, others say that one must play the game at a certain level to be successful as a coach. Others say it’s important to have guidelines for coaches who wish to coach the higher levels of the game. What is your take on that debate?

CEDRIC CATTENOY: Look, I think U.S. Soccer does a good job. They changed their content in the last few years. I don't know the price, but I do know if you want better coaches, you need to have good education. The clubs have a responsibility in this as well — if a club has a good coach, they should help him and help pay for it.

If you're a pro player, you have a knowledge of the game and it's different. But being a good former pro doesn't mean you'll be a good coach. There are many examples of that: a guy with an amazing career as a player but as a coach — because it's another job, no? — it's different. Because you need to learn how to teach.

SA: There is a lot of talk about the success of young Americans in Europe recently. You have some good perspective, coming from Paris St. Germain and understanding what an elite youth development model looks like. Here is a big question: how long will it be before MLS academies are developing players as good and as often as Paris St. Germain?

When we received players, they were already very good. If I can use Chicago as an example — the city has some good players but they don't have the same talent. I will say, for example, Gaga [Gabriel Slonina and Guti [Brian Gutierrez] could play in the Paris academy. They are special. The main difference is that in Paris you have more special players.

I've been in the U.S. now for six years and I think the level is improving. All of the MLS clubs have invested and continue to invest in staff, facilities and resources. Many non-MLS clubs do a good job as well. The process started in the U.S. and it's difficult to comment on the timeline, but for sure there is a big change.

If I had to compare the level between 2016 and now, it is much better. A key point in the development of players is the level of competition. MLS is doing a good job with that because we have the MLS Next, the MLS Next league, and the Generation adidas Cup.

SA: If you could change one rule in soccer, what would it be and why?

CEDRIC CATTENOY: In the U-12 age group, they play 9 vs. 9. I would change it to 7 vs. 7 or 8 vs. 8. Nine is too many players — with fewer players, each one will touch the ball more and will have more space — less pressure — so they will get more comfortable with the ball and be more ready for the next stage of development.