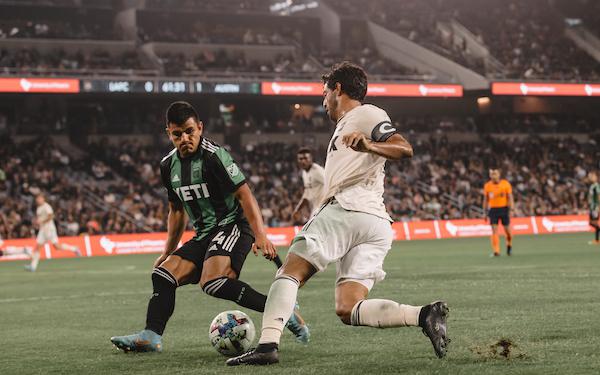 At the All-Star break, two things stand out in MLS.

LAFC is on course to break the league record for points in a season.

And upstarts Austin FC, FC Cincinnati and the Chicago Fire are all poised to make the playoffs, something Austin FC and FC Cincinnati have never done and the Fire has done once in the last nine years. (Even expansion Charlotte FC, after a chaotic start to its first season, is in the hunt for a playoff spot.)

MLS is far different from Europe's big 5 leagues, which are dominated by one or several teams.

LAFC is averaging 2.22 points per game through 23 games, which puts it on course to finish with more than 75 points.

In 2021, New England set a new record with 73 points, marking the fourth time in five seasons -- all but the Covid-shortened 2020 season -- that a different Supporters' Shield winner set a new record for points in a season.

And the 2021 regular-season champion Revs? They are one of four teams tied on points for seventh place in the Eastern Conference, 15 points off the lead held by Philadelphia.

New England is not alone. Based on the current standings, more teams in the top 10 in last year's overall  standings are in this year's bottom 10 (Kansas City, Atlanta United and New England) than in this year's top 10 (Philadelphia and NYCFC).

And put another way: as many teams in last year's bottom 10 are in this year's top 10 (LAFC, Austin FC, CF Montreal and FC Dallas) as remain in the bottom 10 in 2022 (San Jose, Houston, Toronto FC and Inter Miami).

Many are player mechanisms used by other American pro sports leagues for years to control costs, restrict player movement into their leagues — even in the face of growing global player markets — and promote parity.

Much attention has been made of MLS's unwillingness to adopt a promotion-relegation system. But what separates MLS from other major soccer leagues is its emphasis on parity, which we seeing play out again this year.

When MLS launched in 1996, teams did not enjoy the support of fans over generations. Parity was a way to ensure that fans, players and coaches believed their team had a sporting chance every season.

Austin FC went from 24th out of 27 teams in 2021, 42 points off the pace of the Revs, to second, just six points behind LAFC in 2022. FC Cincinnati had the worst record in MLS in each of its first three seasons but it now sits in sixth place in the Eastern Conference, ahead of such teams as New England, Atlanta United and Toronto FC, all regular-season or postseason winners in the last five years.

How much of these changes are due to what Austin FC and FC Cincinnati have done right or what New England, Atlanta United and Toronto FC have done wrong?

From an American perspective, having the same team or the same two or three teams win every year, like in the big 5 leagues, is unfathomable. In the last decade, each of the other four major American leagues has had a minimum of seven different champions. The competitive structure of these leagues isn't better or worse. It's just different.

But parity isn't for everyone.

In the extreme, it promotes mediocrity, something MLS must consider in face of the already difficult battle it faces from competition for fans who have access to follow teams in other leagues with better players and longer histories. And fewer restrictions on player movement.