Ryan Giggs accused of 'litany of abuse' at assault trial 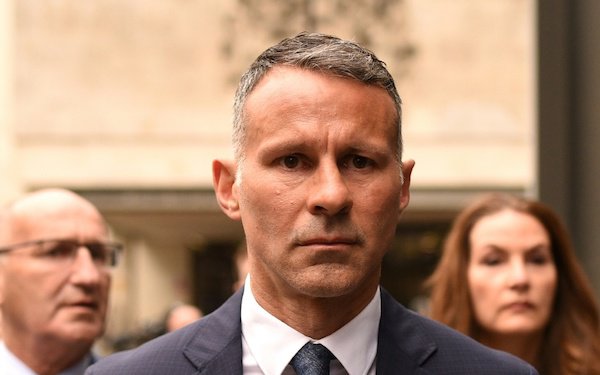 Former Manchester United star Ryan Giggs went on trial Monday accused of submitting his former girlfriend to a "litany of abuse" during a coercive and "toxic" relationship, in a case that has upended his coaching career.

The 48-year-old, who until recently served as coach of the Wales national team, has pleaded not guilty to the charges, which carry a maximum jail term of five years.

The jury trial opened at a crown court in Manchester on Monday morning, presided over by judge Hilary Manley. She said it is expected to last two weeks.
Giggs entered the court building looking grave-faced, flanked by his legal team.

Inside he sat upright in the dock, frequently sipped water and appeared to follow the proceedings closely.

Giggs is charged with assaulting his former girlfriend, 36-year-old PR executive Kate Greville, causing her actual bodily harm on Nov. 1, 2020, when police were called to his home in the Manchester area.

The Welshman is further charged with common assault of her younger sister, Emma Greville, on the same day. He also faces a charge of controlling and coercive behaviur towards Kate throughout their relationship, which began in 2017 and ended with the alleged assault.

Prosecution lawyer Peter Wright told the jury that Giggs carried out "a litany of abuse -- both psychological and physical -- of a woman he professed to love" during a "manipulative, toxic, damaging relationship."

"The defendant's behavior became increasingly obsessive" in the relationship, Wright said, and was "calculated to erode any sense of self-worth".

By the date of the alleged assault, Kate "had determined she needed to terminate their relationship" and knew Giggs "had yet again been cheating on her", Wright said.

Her sister Emma had been looking after the couple's house while Giggs and Kate had gone out with friends. Back at home, Giggs argued with Kate and pushed her to the ground, causing her to bruise her arm, he said. At this point, Emma intervened and "the defendant -- we say deliberately -- elbowed Emma in the jaw, causing her discomfort."

Giggs later "deliberately headbutted Kate, thereby causing swelling to her lips that were bruised and bleeding. Shortly after this, Emma called the police," the prosecution lawyer said.

Giggs was arrested by police at his home and released on bail. He has denied the allegations and pleaded not guilty at an initial court appearance last year.

Giggs "was idolized -- still is -- by his adoring fans," Wright said, but treated Kate "in a way that cannot be excused or overlooked by either an adoring public or the law."

The judge told jurors they may have formed opinions from media stories, but "must put those opinions aside" and must not "reach for Google".

Kate was set to appear in court Tuesday, speaking behind a screen. The court was also to watch a videoed police interview.

Giggs's lawyer, Chris Daw, insisted his client "used no unlawful violence" against Kate or her sister, and that he "fully accepts that his behavior on a moral level was far from perfect." Daw said there was "some minor accidental contact" between them on the night of the alleged assault.

Giggs resigned as the Wales manager in June, after being on leave since his arrest. He remains on conditional bail, and has said he looks forward to "clearing my name."

A dazzling teenage talent, Giggs ended his career at Old Trafford as the most-decorated player in English soccer history.

As a player, Giggs made a club-record 963 appearances over 23 years for Manchester United, winning 13 Premier League titles and two Champions League trophies.

He then began his coaching career at Old Trafford, taking temporary charge at the end of the 2013-14 season after David Moyes was sacked before working as an assistant to Louis van Gaal for two years.

Giggs was appointed Wales boss in January 2018 and helped it secure qualification for Euro 2020, just the second major tournament appearance since the 1958 World Cup.

His trial opens shortly before another court case involving a star player, Manchester City defender Benjamin Mendy. The Frenchman is set to go on trial on Wednesday in Chester, northwest England, accused of rape and assault in a case involving seven women.

Mendy, who has been suspended by City, denies the allegations.