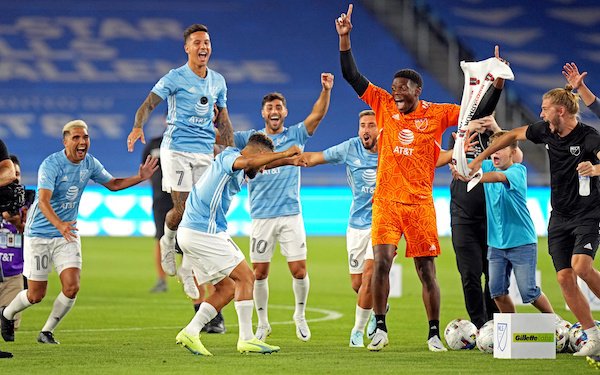 Hany Mukhtar, whose shot won the deciding crossbar challenge, celebrates with the MLS all-stars, winners of the MLS All-Star Skills Challenge over the Liga MX all-stars.

A decade ago, Hany Mukhtar was considered one of "Germany's greatest talents," as the magazine 11 Freunde put it. He made his first--team debut for Hertha Berlin, the club he joined at age 5, before he turned 18. He scored Germany's winning goal in its 1-0 win over Portugal in the 2014 U-19 European Championship final and scored four goals at the 2015 U-20 World Cup.

But after 10 Bundesliga appearances, Hertha Berlin sent Mukhtar off to Benfica.

"I went to Lisbon and didn't play that much, didn't find my stride," he said on the eve of the MLS All-Star Game in Minnesota, "so obviously it became difficult for me stay in the national team program because the other boys were getting playing time with their clubs." 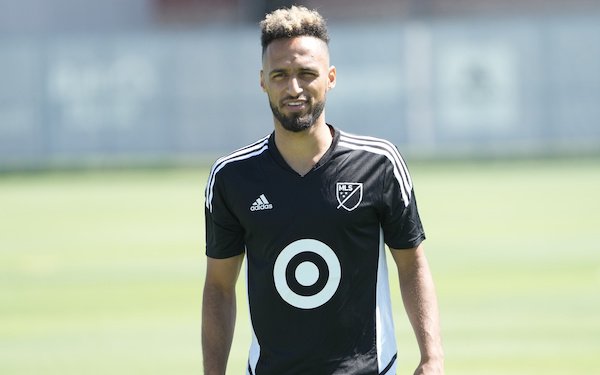 After a short loan stint with Red Bull Salzburg, Mukhtar moved to Denmark's Brøndby in 2016 and thrived. Fans called him the "German Wonderkid," he earned Danish Superliga Player of the Year honors, scored the gamewinner in a Danish Cup title win, and in 80 Superliga appearances he scored 23 goals and assisted on 20.

When a scout contacted him about considering Major League Soccer, Mukhtar was somewhat skeptical because the club, Nashville SC, had yet to launch. But then it was explained to him that the 2020 expansion team wanted to build its team around him as a playmaker. "When they said that they wanted me to be the No. 10, they convinced me," said Mukhtar, who became the club's first Designated Player.

Shortly after he arrived, a tornado hit Tennessee, damaging some if his teammates' homes. He downloaded a tornado warning app and otherwise adapted quickly to his new home and new league. In fact, Mukhtar's MLS start was one of the best in history. During his first full season of 2021, he led the league in goal production with 16 goals and 12 assists, plus three goals in postseason play. 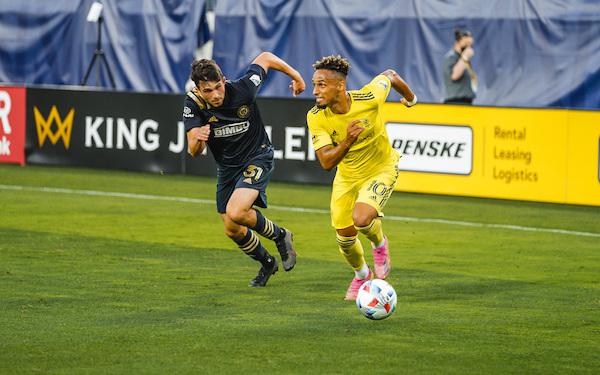 When Nashville extended his DP contract in April, he had 26 goals and 20 assists in 58 regular s-eason games. Mukhtar arrived at the 2022 All-Star Game with 37 goals and 24 assists in 75 MLS games. His selection came after missing out on last year's All-Star Game and finishing second to New England's Carles Gil (four goals, 18 assists) in 2021 MVP voting despite the more impressive stats.

"I feel very comfortable here in America," Mukhtar said. "The people are very friendly, especially in Nashville. It's a pleasant lifestyle. It shows on the field that I'm enjoying it here. We have big plans with Nashville and hopefully we'll reach our goals this season."

Despite the up and downs of his early career, the 27-year-old said he's enjoyed and learned from his various experiences that have now included four countries in addition his German homeland.

"One also takes in the culture off the field," said Mukhtar, who was born and raised in Berlin and whose father had immigrated to Germany from Sudan. "What people are like, how they live. And America is a continent in itself and different in many ways, but I like it very, very much.

"Nashville is totally different from Berlin. Berlin is a metropolis and Nashville is a smaller city. But overall, very very nice."

When he first arrived in Nashville, he didn't expect to take to country music — "not really my thing" — but even that has changed.

"At beginning not so much, but in the meanwhile I find the music really OK," he said. "When you go out, it can make for a real nice atmosphere."

"The level is very good. You can see that here at the All-Star game — highly talented players and the league in general is obviously on an upswing. It's very interesting to be a part of it and observe the year-by-year evolution of the league. We're also seeing many very young, very talented players."

Mukhtar's U.S. adventure has also resulted in a major off-field development. He's engaged to be married to an American women he met in Nashville. The date?

"The thing about American soccer," he said, "is you don't know how long the season will be for your team, so we haven't set the date yet."

It ceremony will come, he hopes, after a long postseason run.