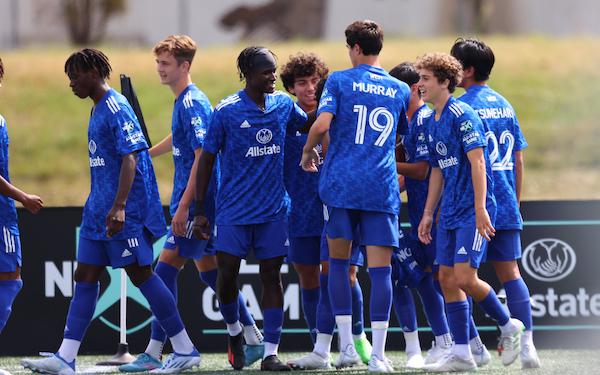 Marcus Lee's father's favorite sport had always been basketball, but his son attended an elementary school in Southern California with an adjacent soccer field that became his favorite hangout. After an AYSO stint, the skills and creativity spawned by pickup play duly impressed the venerable coach  Don Ebert  at a Strikers tryout.

This May, three months before his 16th birthday, Lee became the youngest starter of a 2022 U.S. Open Cup game and in a 5-0 California United Strikers win over San Fernando Valley FC and scored and assisted.

"No, I didn't imagine him playing with adults at age 15," said David Lee while watching his son Marcus play in Wednesday's MLS Next All-Star Game, an event that capped the second year of the league launched in the wake of the U.S. Soccer Development's April 2020 closure.

Training five times a week has been the norm for Marcus the last couple years and while David stresses the importance of higher education, Marcus is focused on going pro. That's the norm for the players gathered by MLS Next to enjoy VIP treatment during MLS All-Star week and showcase their talent at National Sports Center Stadium in Blaine, Minnesota. 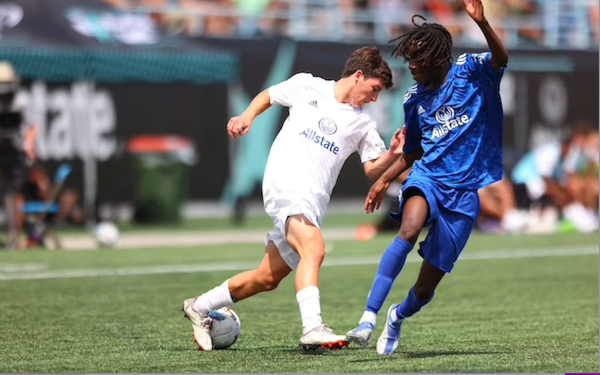 An informal survey of the parents in attendance yielded identical responses: Their sons want to go pro as soon as possible, whether in MLS or abroad. "Every boy dreams of going pro," says one dad, who fully supports the ambition while aware that only small percentage land a lucrative career on the soccer field. The mother of a player intent on going to Europe despite the family's emphasis on academics is comforted by the fact that a move abroad is itself an educational experience. Learning a second language, for example.

Seeing the number of U.S. teens playing first-team ball reach unprecedented levels in recent years and playing youth ball under a pro league's umbrella undoubtedly increases the boys' confidence that pro contracts are within their grasp.

The result — East 2, West 1 — was of little concern to those in the stands as they assessed the skills of players who hailed from 28 MLS academies and five non-MLS clubs, including the Strikers' Lee. The observers included U.S. Soccer sporting director Earnie Stewart and men’s national team general manager Brian McBride, and MLS club directors such as Lutz Pfannenstiel, the German hired two years ago by St. Louis City for its 2023 MLS launch.

He's spent the last two years setting up its academy and hired as Director of Coaching John Hackworth, the former U.S. U-17 national team coach with decades of experience in guiding elite young players in the USA. Pfannenstiel has been building the first team around foreign signings but says it's paramount that local talent becomes a significant part of the team's future. "It forges a connection to the community," says Pfannenstiel. It also creates the possibility of homegrown players being sold abroad to help fund the academy investment. "Look at the Philadelphia Union," he says.

Pfannenstiel is hopeful, saying that the American kids' athleticism impresses him even more than their German counterparts and their skill level adds to his optimism.

Indeed, these mostly 16- and 17-year-olds displayed a remarkable skill level — from slick touches and accurate passing to clean tackling. Rarely was a ball misplayed.

Todd Saldana, LAFC's academy director, was among the few Americans moving straight from high school to pro in the old NASL days when signed by the Los Angeles Aztecs, coached by Rinus Michels, at age 18 in 1980, four years before that league folded. The differences between this generation, he says, include the dramatic increase in the number of players, the proliferation of educated youth coaches, and access to playing and training with adults.

"My situation was unique for its time because I was able to play on Sigi Schmid's semipro team the Greater Los Angeles Soccer League," he said. "And I benefitted from having two older soccer-playing brothers. Now, teenagers all over the nation have access, to use the cliche, to a complete pathway." 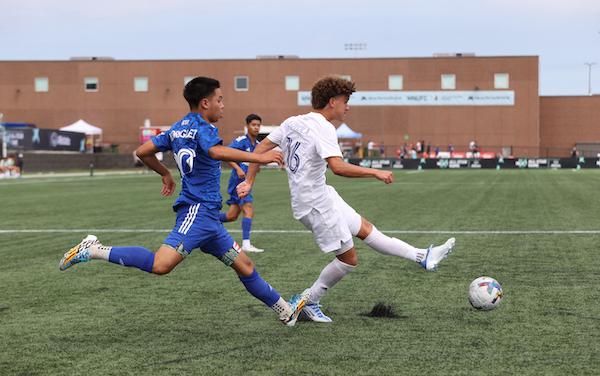 Nineteen of the MLS Next all-stars have already played in the MLS Next Pro league that was launched this year. St. Louis City, which already competes in MLS Next Pro, also has an NPSL team to provide "an additional bridge" for youngsters to the pros, says Pfannenstiel.

It's noteworthy that this group of all-stars reflects the diversity of the American soccer community. While players such as Lee emerged from a family with no soccer background, many others are from immigrant families and include dual nationals, such as Inter Miami's Kobi Thomas, who played for Jamaica in the 2022 U-20 World Cup qualifying tournament. His clubmate Benjamin Cremaschi's father emigrated from Argentina. St. Louis City's Fritz Volmar grew up in Illinois to parents of Haitian heritage

Michigan product Gershon Henry of Real Salt Lake's academy has played for the U.S. U-17 national team but emotional ties to his native Ghana have him also imagining himself playing in that nation's jersey. NYCFC's Diego Rossi has Italian heritage and plans to pursue a career in Italy. 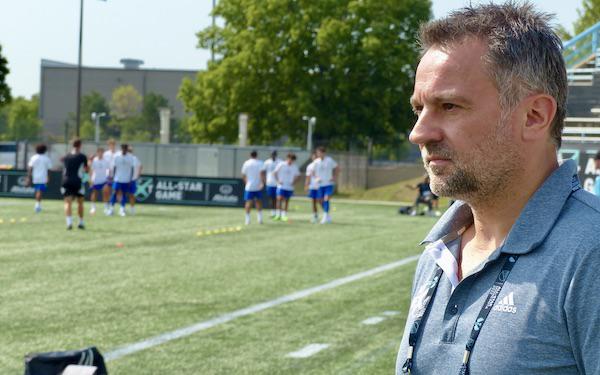 When U.S. Soccer pulled the plug on the DA, Fred Lipka (photo above), MLS VP of Player Youth and Development, was charged with leading the launch of MLS Next. Its success would depend much on its ability to meet the demands of its academies while satisfactorily serving the amateur youth clubs (what it calls "elite academies"), which still provide the majority of youth soccer opportunities in the USA. During the final years of the DA, the amateur clubs felt that U.S. Soccer, which organized the DA, was catering too much to MLS clubs and didn't appreciate their feedback or concerns.

"We aimed to take leadership of an ecosystem while also being supportive," Lipka said. "There are egos in every market, but we encourage our [MLS clubs] to continually work at improving their relationships, communication and collaboration with the elite academies. We put a lot of energy into that. It's not perfect but we believe it's moving in the right direction. ...

"Nobody left this year. I sense teams are very happy. And we added more clubs."

During a first season in which Covid added to scheduling challenges and limited travel, MLS Next pulled off a 2021 national championship and showcase in Frisco, Texas. In season 2, it added to the MLS Next Cup playoffs and showcase the MLS Flex tournament and the all-star game.

"I believe we succeeded in delivering competition," he said. "Our events went very well. These events are now in the landscape and very well received by  our clubs."

While amateur clubs continually face travel cost challenges — in some regions more than others for league play — Lipka points out MLS Next doesn't saddle them with mandatory travel for all age groups to several events.

One complaint of amateur clubs — for years — has been the recruitment of its players by MLS teams, which besides weakening their squads comes without compensation even if the MLS clubs end up profiting from them. Two MLS officials said that it will soon incorporate a type of scholarship-funding reward program for amateur clubs whose players move to MLS clubs. That, like plans to end or redesign the territorial rights that restrict players' freedom to pick the MLS academies of their choice, has been promised for quite a while now without fruition.

On the matter of dangling the carrot of a pro career when so few players of the thousands realize the dream, Lipka insists MLS Next is committed to the "holistic" development of players beyond the soccer field.

"We couldn't succeed if we didn't address the education part of their development," he said. "For one, this is something parents always ask about. And we are committed to the overall well-being of the players and continue to increase staff and programs dedicated to that."

Lipka arrived to MLS from France.

"Where I come from, they don't care what happens after high school," he said. "The society here — with its university system — is different. Our clubs are focused on their players' high school education and what happens afterward. We have a partnership with the University of South Carolina. We expect our clubs to help develop the complete person.

"We are only two years into this so we continue to pursue ways in which to elevate the experience, which includes providing culture programs that address diversity — as well as gender issues — and we are striving to increase accessibility."

He also says that the top players such as those at the all-star game could all get college scholarships if they chose that path.

Javier Morales, who spent a decade of his pro career as an MLS playmaker — winning MLS Cup with Real Salt Lake in 2009 — is Inter Miami's U-17 coach and led the East team at the MLS Next All-Star Game. Going pro at age 18 in his native Argentina worked out very well for him.

"But I always tell young players that while they may have great potential on the soccer field," he says, "they must also consider the necessity of an education for other career options. ... We track our players' academics by using a green, yellow, red system. Yellow is a warning and players know that  if their academic performance drops to red, they won't be playing that weekend."

It's decision time for elite U-17s who haven't yet signed MLS Homegrown or MLS Next Pro contracts. It's the age window when pro clubs expect accelerated integration into the adult level, as opposed to playing U-19s, for example.

The increasing popularity and growth of MLS and the ability of its clubs' academies to connect teens to the stars they look up to — sharing facilities,  joining their practices, appearing in MLS Next Pro games — have boosted the allure of signing with MLS. As has seeing players slightly older moving on to European clubs thanks to their MLS first-team success. But nearly every parent I spoke to said their sons are heavily drawn to Europe. And no matter how much they may want to steer their boys to a university, they're inclined to support their sons' ambitions. 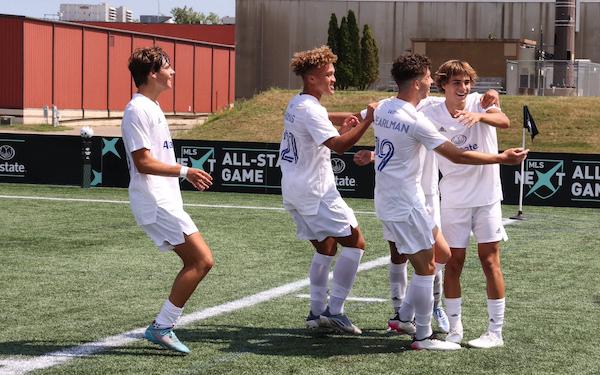 In the all-star game, the East equalized on a penalty kick that Toronto FC's Adam Pearlman  stepped up to take, but instead of shooting he tapped the ball to Cremaschi, who finished on a  trick play like Leo Messi with Luis Suarez did in 2006 and similar to the one made famous by Johan Cruyff  for Ajax in 1982. The boys, unbeknownst to their coaches, had planned the maneuver during their couple of days together ahead of the game.

A delightfully unexpected feat to watch from the stands, it prompted the entire East squad to bolt from the bench and join an unbridled celebration at the far corner flag.

For however serious the game has become that 16- and 17-year-olds are having to make career decisions, it was among the moments showing how much they're enjoying themselves.