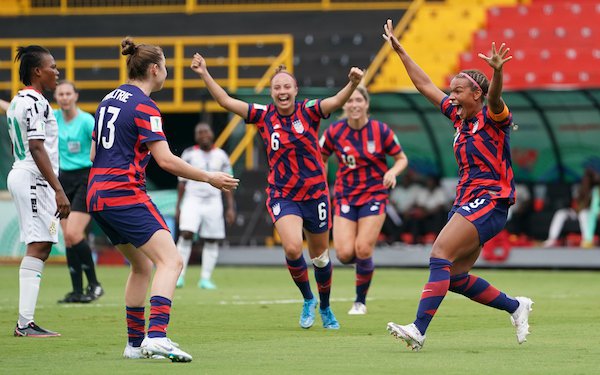 The USA showed off the depth of its attacking arsenal with goals from three different players in a 3-0 win over Ghana in their opening match at U-20 Women’s World Cup in Costa Rica.

The goals were scored by forwards Michelle Cooper and Alyssa Thompson in the first half and by Ally Sentnor shortly after her introduction in the second half.

Cooper, the Duke star who won the Golden Ball and Golden Boot awards at the 2022 Concacaf U-20 championship, put the USA ahead in the 11th minute on a header from close range following a cross from right back Laney Rouse. The play was set up by 17-year-old forward Jaedyn Shaw, who recently made her NWSL debut with the San Diego Wave.

Cooper fed Thompson for the second goal in the 38th minute. Thompson is the USA's other 17-year-old player and a high school senior who plays for the Total Futbol Academy in MLS Next's boys league.

Sentnor completed the scoring in the 51st minute with her first goal for the U-20s. She was considered one of the USA's top young players but tore her ACL in the preseason of her freshman season last summer at North Carolina.

• Sally Menti ruled out. Menti was replaced by Annie Karich after suffering an ACL tear in her right knee during training in Costa Rica prior to the tournament. Karich is a rising freshman at Santa Clara, which Menti also attends.