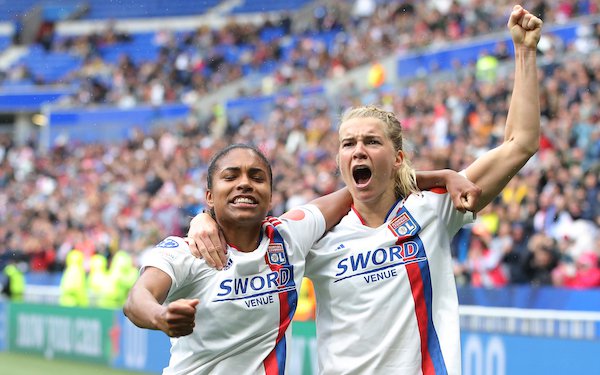 Americans Catarina Macario, Alex Morgan and Trinity Rodman are among the 20 players nominated for the 2022 Women's Ballon d'Or.

The award, to be voted upon by women's soccer journalists from around the world, will be awarded by France Football for the third time. The winner will be announced at ceremonies in Paris on Oct. 17 at the Theatre du Chatelet in Paris.

Macario, who scored 23 goals in 34 games in her first full season at Lyon and led it to its record eighth UEFA Champions League title and its 15th French league title in its last 16 seasons, is considered one of the favorites, but she suffered an ACL tear that kept her out of this summer's Concacaf W Championship.

Morgan, who shares the current NWSL scoring lead with Sophia Smith, led the USA to the inaugural Concacaf W Championship title, scoring the winning goal in the final. Rodman was the 2021 NWSL Rookie of the Year for the champion Washington Spirit, but she was a little-used reserve for the USA at the Concacaf W Championship.

There is no clear-cut favorite for the award.

Barcelona's Alexia Putellas, the 2021 winner, was injured in a training session on the eve of Spain's participation in the European Championship. Macario was beaten out by Paris St. Germain's Marie-Antoinette Katoto for the French player association's D1 Arkema player of the year award, but Kakoto also tore her ACL, suffering the injury in France's second game at Euro 2022, and will be out of action for 6-8 months.

Two of the biggest names in women's soccer are Ada Hegerberg (Norway) and Vivianne Miedema (Netherlands). Hegerberg, the 2018 winner, returned to the Norwegian national team after an absence of almost five years, but it was a bust at Euro 2022. Miedema missed two games with Covid at Euro 2022, and the Dutch, major disappointments, exited in the quarterfinals.

Three players on the England team that won Euro 2022 are on the short list -- Millie Bright, Lucy Bronze and Beth Mead -- but Bright and Bronze are both defenders, who rarely draw wide support from international award panels.

Eighteen of the 20 nominees -- all but Morgan and Rodman -- play for European clubs and 14 are Europeans.

There are new rules in 2022 for the men's and women's France Football awards. The most important is that the year under consideration will be the season in most European countries -- August to July -- not the calendar year, which France Football has used since it first awarded the men's Ballon d'Or to Stanley Matthews in 1956.

The voting for global women's awards has often been bewildering. Voters -- journalists for the Ballon d'Or or journalists, coaches and captains for the FIFA awards -- rarely have been able to consistently watch women's soccer on a regular basis though that is starting to change.

DAZN streamed the UEFA Champions League around the world for the first time. Euro 2022 aired on the ESPN and Univision networks.

The problem for Macario, Morgan and Rodman -- no player on Canada's Olympic gold-medal team was nominated -- is that the voting is very often eurocentric, which is natural given the makeup of the voting pool.