Although Sergino Dest has made it clear that he wants to stay at Barcelona and fight for playing time, it is increasingly clear he no longer fits into the plans of head coach Xavi, who is in his first full season in charge of the club he starred at for many years.

That became apparent when Dest was not even included in the 23-player squad for Barca's LaLiga opener that ended in a 0-0 tie with Rayo Vallecano.

Dest's position appeared to be safe after Barca did not sign Spaniard Cesar Azpilicueta, who re-signed with Chelsea, but Sport, the Barcelona sports daily, reported Barcelona has gotten the go-ahead from its sporting department to sell or loan Dest and sign a new right back. Sport also reported that Barcelona is negotiating with Manchester United for Dest's transfer. 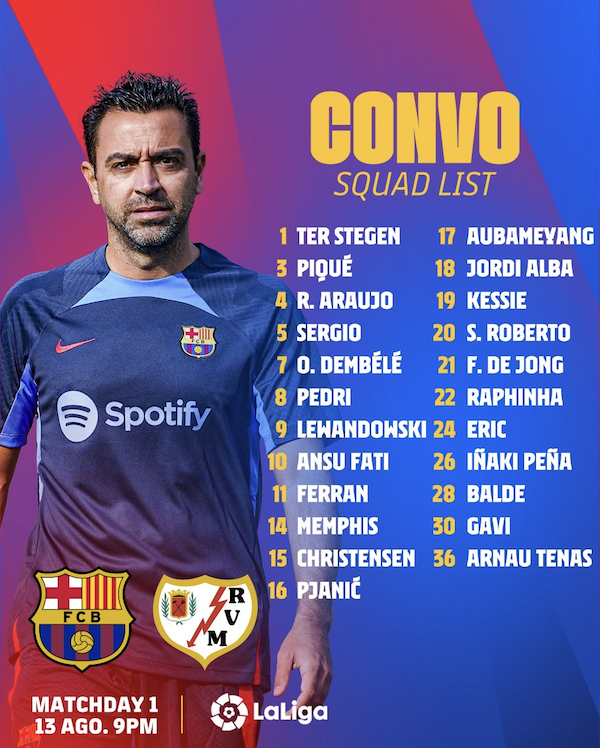 Barcelona has been begging players to leave — or take pay-cuts — in an effort to meet LaLiga financial targets in order to register its new signings.

It wasn't able to register Robert Lewandowski, Raphinha, Andreas Christensen and Franck Kessie until Friday night after raising more funds from the sale of its commercial assets. But French signing Jules Kounde has not yet been registered.

One of the players asked to take a paycut or leave is Franke de Jong, but the Dutch midfielder did play in the LaLiga opener.

Like Dest, de Jong has been linked to Manchester United, which has started the 2022-23 Premier League season with two defeats. The connection? United manager Erik ten Hag coached both players at Ajax.

Joe Scally, 19, had started both Bundesliga games at right back for Borussia Moenchengladbach.

Tim Ream's Fulham has started with two ties -- 2-2 against Liverpool and 0-0 at Wolves. Two years ago when the Cottagers' season ended in relegation, they didn't pick up their second point until November.

Malik Tillman scored on a header for the winner in the second straight game. Rangers' 4-0 win over St. Johnstone was its third win in three games to open the Premiership season.

Brenden Aaronson helped Leeds United jump out to a 2-0 lead at Southampton. His corner kick was flicked on for Rodrigo's second goal.