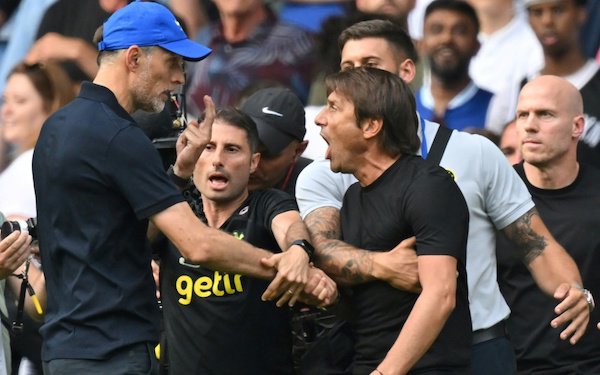 Chelsea manager Thomas Tuchel said he was happy to take a "fair tackle" from Tottenham boss Antonio Conte after both were shown red cards for clashing twice during a heated 2-2 tie on Sunday.

Conte's overexuberant celebrations of Spurs' first equalizer resulted in the two coaches being booked for squaring up.

Tuchel then responded by running down the touchline in celebration when Chelsea retook the lead through Reece James 13 minutes from time.

Tuchel was not happy at the Italian for not making eye contact during a handshake at fulltime, which sparked another melee between both sets of coaches and players.

Tuchel's ire was instead directed towards the officials as both Tottenham's goals could have been disallowed.

Pierre-Emile Hojbjerg's strike was allowed to stand despite a potential foul on Kai Havertz in the build-up and Richarlison standing in an offside position when the Dane's shot was hit.

Before the corner leading to Kane's equalizer, Spurs defender Sergio Romero also escaped a red card for dragging Marc Cucurella to the ground by his hair.

"It was a clear foul on Kai Havertz. OK, the situation goes on and on and on, then it is a clear offside," added Tuchel. "Since when can you pull hair on the football field? It's ridiculous. That's the only frustration. I'm the happiest coach on earth because we played a fantastic match."

Conte batted away several questions about his tete-a-tete with Tuchel, but admitted a gap between the sides remains despite Spurs' improvement.

Chelsea won all four meetings between the sides last season, three of them after Conte took charge in November.

"In my opinion, it is better to talk about the game," said Conte. "Chelsea showed to be a really good team, but compared to last season we did a bit better. The difference is clear. This team won the Champions League two years ago, last year won the Club World Cup, got to the final of the FA Cup and Carabao [League] Cup. There is a difference between Chelsea and Tottenham but we are here to reduce this gap. Last season we lost three times, this time we drew so it's a little step forward."