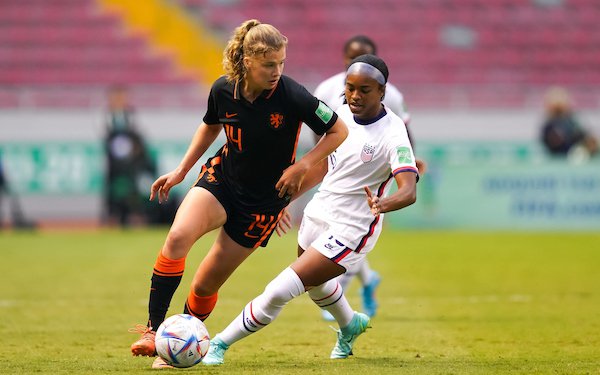 The loss leaves the USA in danger of failing to reach the knockout stage at the U-20 World Cup for the second straight tournament.

The USA needs to beat Japan, the defending champion and winner of its first two games with shutout victories, by two goals on Wednesday to be assured of advancing to the quarterfinals.

Sanne Koopman (header off redirected corner kick), Dana Foederer (shot from 30 yards) and Marit Auée (penalty kick following a foul by captain Talia DellaPeruta on Danique Noordman) built the 3-0 Dutch lead after 62 minutes. Despite a DOGSO red card to Samantha Van Diemen for a foul on U.S. star Michelle Cooper in the 82th minute, the Oranje U-20s held on for a 3-0 win.

Cooper was one of three subs brought on at the start of the second half, but they could not turn the match around.

The USA entered the game with 12 wins and one tie in 2022. The tie came on the final day of this summer's Sud Ladies Cup in France against the Netherlands. The U.S. U-20s won all seven games at the 2022 Concacaf championship, but it is a big step from Concacaf to the world stage. (Canada has lost its first two games and already been eliminated.)

The only other time the U.S. U-20s have lost a game by as many as three goals came in 2012 when they turned things around after losing to Germany 3-0 in the group stage and beat Germany 1-0 in the final.