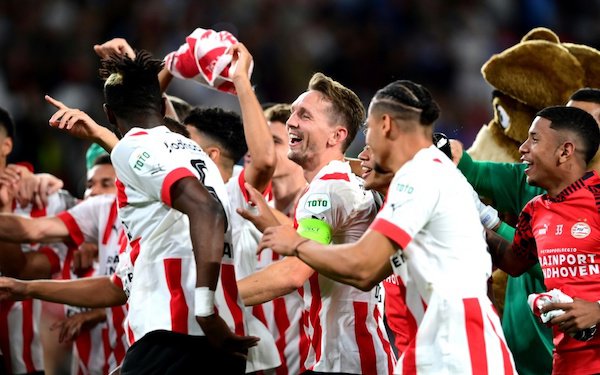 The last stage of the Champions League qualifying marathon kicks off on Tuesday with three clubs that have already got their hands on the trophy eager to grab one of the last six group slots -- and the check that goes with it.

Benfica, which won the European Cup in 1961 and 1962 and has reached the final five times since then, faces Dynamo Kyiv.

While Benfica coach Roger Schmidt worries whether Alex Grimaldo will recover from the dizzy spell that forced him off in Saturday's 1-0 league win at Casa Pia, the Ukrainians made clear they have weightier concerns.

The game will be in Lodz, where Dynamo is in exile following Russia's invasion of Ukraine.  When the squad returned to training in Poland after winning in Austria to eliminate Sturm Graz in the previous round, the club's website made clear that this is more than a soccer game.

The players, it said, "realize they keep fighting for the honor of the country by adding points to the UEFA rankings table. All Kyivans miss home and look forward to the return to Ukraine, but the fact that they give our nation and warriors positive emotions makes them leave emotions behind. They have a single goal – to go through to the Champions League group stage."

The two clubs met in the group stage last season.

They drew 0-0 in Kyiv in the opening round. The Portuguese club won 2-0 at home in the last round to edge Barcelona for second in the group.

Returning to the group stage this year offers a hefty reward.

PSV Eindhoven, which needed an overtime goal to eliminate Monaco in the previous round, faces Rangers.
Ruud van Nistelrooy, who replaced Schmidt as coach at the 1988 European champions, faces old international teammate and club adversary Giovanni van Bronckhorst, in Glasgow on Tuesday.

The two coaches were long-time Netherlands teammates. They played on opposite sides the last time the clubs met in the Champions League.

Rangers, with Van Bronckhorst in midfield, won home and away in the 1999 group stage. Van Nistelrooy scored PSV's goal at Ibrox as Rangers won 4-1.

"We are ready," declared van Bronckhorst after a 4-0 league win over St. Johnstone on Saturday.  "We have two days to prepare and make the players fresh again and make sure we have our game plan in mind and execute the game plan as best as possible. It is a big game for us."

The Israelis surged through the last round by scoring three times in the last 30 minutes for an eye-catching 4-0 second-leg victory at Olympiakos.

Red Star coach Dejan Stankovic, a Champions League winner playing for Inter Milan, told Serbian media he was impressed calling Maccabi "a quality team in every area. I couldn't fault with them. It won't be easy. It is not easy to enter the Champions League."