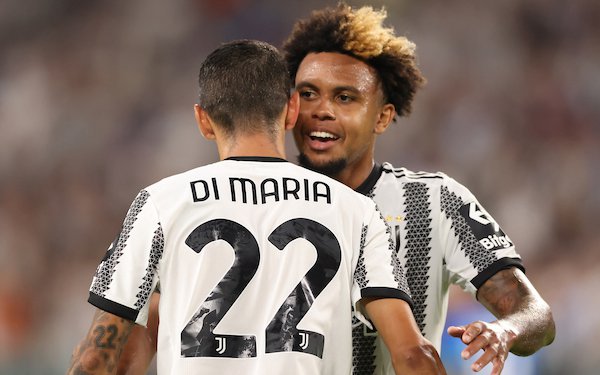 Following an injury picked up on July 29 in practice at the end of Juventus' summer camp in the United States,  U.S. midfielder Weston McKennie was expected to miss at least the first two weeks of the Serie A season.

But not only was McKennie ready for Monday's season opener, but he started in the 3-0 home win over Sassuolo.

So much for talk about McKennie's dislocated shoulder keeping him out of action for 3-4 months.

In his first game with Juventus, 34-year-old Argentine Angel Di María was the star with a goal and an assist but had to leave the game in the 66th minute with an apparent adductor injury.


Chris Richards, 22, made his Premier League on Monday, coming in the 79th minute for Crystal Palace and helping it secure a 1-1 tie at Liverpool, which had new star Darwin Nunez sent off for head-butting Palace defender Joachim Anderson.

Palace manager Patrick Vieira employed a five-man backline to deal with Liverpool's attack, and Richards came on for Tyrick Mitchell and won all four of his aerial duels. It was a tactical approach by Vieira and performance by Richards that should ensure plenty of opportunities for the young Alabaman.

“That was our plan and it was executed by the players,” he said. “We remained calm and composed and kept our organization. We managed to deal with the crosses with the three centre-backs really well. It’s important to have that kind of flexibility. The way we played today, we played the system a couple of times last year."

Richards is the sixth American to play in the Premier League this season and third to make his debut after the Leeds United duo Brenden Aaronson and Tyler Adams.

What a night and what a place to make my prem debutgood result but we go again next week for the 3 points  https://t.co/rkLd3kh5f2