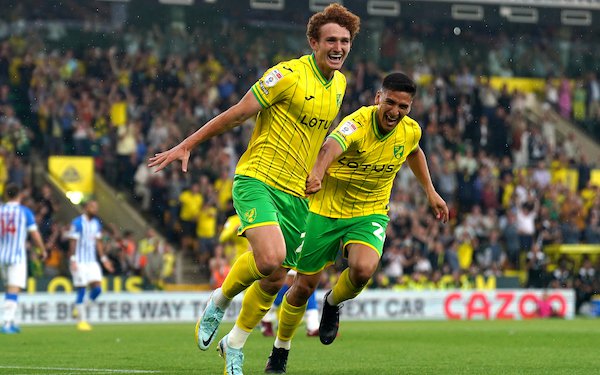 It was a struggle for Josh Sargent and Norwich City last season, his first with the Canaries.

And it was a struggle in the first three weeks for Sargent and Norwich City following their relegation from the Premier League to the Championship League.

Sargent, 22, finished with only two goals in 26 Premier League games last season at Norwich following his transfer from Werder Bremen, where he played 72 games (13 goals) over parts of four seasons.

He scored his first goal in four league appearances this on Tuesday with a powerful header to open the scoring in a 2-1 win at home against Huddersfield Town, the Canaries' first victory in four games. The goal followed his return to center forward.

Sargent later drew a red card -- Huddersfield Town's Tom Lees was sent off for pulling him down on a breakaway early in the second half -- but Norwich had to hold on for a 2-1 win after Patrick Jones reduced its lead in the 81st minute.

“In the last games," Sargent told the Norwich City Web site, "we were able to keep the ball and create good chances, but we weren’t able to provide that finishing touch. Obviously, today we were, so I’m very excited and it was great to get the first one."

USMNT Picture. Sargent started both games for the USA at the 2021 Concacaf Nations League finals and was the No. 1 striker at the beginning of World Cup 2022 qualifying, but he did not score in three appearances in the September 2021 window and was not recalled following the emergence of first Ricardo Pepi and then Jesus Ferreira.

Sargent is one of four European-based strikers hoping to get hot and earn a spot on the U.S. World Cup roster. Jordan Pefok and Haji Wright have each scored once in the past two weeks while Pepi has seen scant minutes off the bench at Augsburg.

Ferreira is the only forward considered a virtual lock to travel to Qatar.