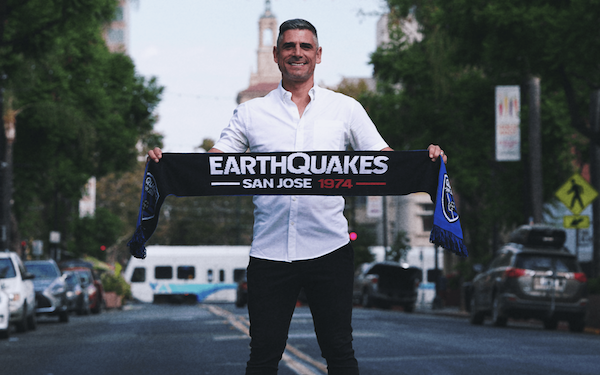 The last time the San Jose Earthquakes advanced in the MLS playoffs, in 2010, Luchi Gonzalez was serving as Dean of Students, algebra teacher and soccer coach at Miami’s Gulliver Prep. The experience gained during his multi-tasking high school stint at his alma mater served him well when he joined FC Dallas as a full-time academy coach in 2012.

And the experience he gathered in the following decade made him an obvious choice to lead a San Jose club that has struggled mightily since its 2008 resurrection.

Currently an assistant coach to Gregg Berhalter, Gonzalez will take the helm of the Earthquakes after the 2022 World Cup to prepare the struggling club for the 2023 season.

Gonzalez, who won the Hermann Trophy at SMU, started his seven-year pro career after being drafted by the San Jose Earthquakes in 2002. He didn't break into the team coached by Frank Yallop that had won the MLS Cup in 2001 and would lift it again in 2003. After seeing few minutes off the bench in eight appearance, Gonzalez moved on to Sweden and Sporting Cristal of Peru, from where his father hails. He made 22 appearances for the Colorado Rapids in 2006-06, when he started coaching U-11 boys. He went into teaching a couple years later after USL stints with the FC Miami and Minnesota Thunder.

Gonzalez also coached at Florida's Kendall SC before joining the FC Dallas academy that at the time was run directed by Oscar Pareja.

FC Dallas moved Gonzalez to first-team head coach after the 2018 season. He guided FC Dallas to playoff berths in 2019 and 2020, falling to eventual champion Seattle in the former and again to the Sounders in the 2020 conference semifinals after beating Portland in the first round. But he was let go last September  with FC Dallas at 6-11-9.

“Luchi has all of the attributes that we sought in our next head coach,” said Earthquakes General Manager Chris Leitch. “He has had success coaching in Major League Soccer with playoff appearances in his first two seasons and has a very strong track record in youth development. His strengths and desires align with our short and long-term goals as a club, and we look forward to him taking the reins after the World Cup.”

Gonzalez aims to succeed where many have failed. After two MLS Cups wins and five straight playoff appearances, the Quakes went on hiatus following the 2005 season. That is, Anschutz Entertainment Group turned them into the Houston Dynamo while MLS sought the new ownership — Lewis Wolff and John Fisher — that would resurrect the club in 2008.

The second era of the MLS Earthquakes — San Jose fielded a team of the same name in old NASL in 1974-84 and the WSA in 1985-88 — saw the construction of a slick soccer-specific stadium that opened in 2015. But on on the field the Quakes haven't come close to the success of the first MLS era.

It's been a decade since the San Jose Earthquakes had anything to brag about, lifting the 2012 Supporters' Shield for best regular-season record, but exiting the playoffs after their first series. Two years earlier, marked the only time during the four playoff appearances since 2008 that San Jose advanced, beating the Red Bulls before falling to Colorado. Those teams were coached by Yallop, who returned in 2008 and lasted till 2013.

Gonzalez will replace Spaniard Alex Covelo, who moved from the Quakes MLS Next Pro head coach position to interim first-team boss after the firing of Argentine Matias Almeyda, who had arrived for the 2019 season. Almeyda, and his six-person staff of fellow Argentines, departed in April after a starting the season with a seven-game winless streak. (Almeyda had replaced the Swede Mikael Stahre.)

That the Quakes academy's young players look more promising than ever will no doubt intrigue Gonzalez. But he'll be judged on first-team results at the club that hasn't had a winning record since 2013.