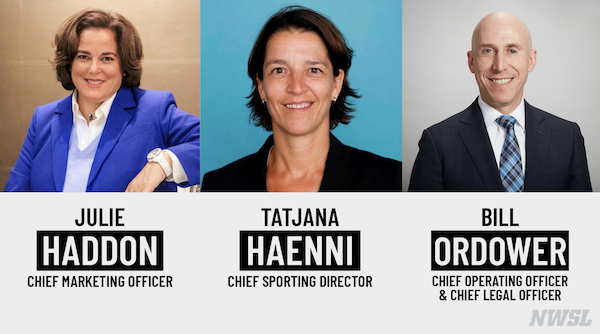 The job: Oversee the planning, development and execution of the league’s advertising, media, fan/player marketing, promotions, social media, influencer, research and brand efforts across all platforms. Also, drive development and implementation of emergent growth strategies across the league, lead licensing and eCommerce, and establish a marketing innovation pipeline to increase audiences and maximize league revenue opportunities.

Experience: Haddon spent five years at the NFL, most recently served as the Senior Vice President of Global Brand and Consumer Marketing. She spearheaded innovative brand campaigns surrounding the organization’s tentpole events from the Super Bowl to the NFL Draft, to the league’s social justice brand initiatives and legalized sports betting fan engagement. She founded and served as the executive sponsor of NFL Pride, the league’s first-ever LGBTQ+ group, committed to advancing efforts around diversity, equity and inclusion. Soccer: As an investor, Haddon joined the Chicago Red Stars ownership group in 2021 and divested from the club prior to assuming her role at the league office. Currently on the Board of Directors of FuboTV and TOCA Football (soccer).

Personal: Attended Indiana University, where she was on the Hoosiers' softball team. Resides in California with her wife and three children.

The job: Collaborate with players, league officials and stakeholders to implement sporting strategies that distinguish and sustain the NWSL as the world’s premier women's professional soccer league. Also, lead the development of procedures, policies and programs to identify, attract, retain and grow the world's best players, coaches and referees. Work closely with FIFA, Concacaf and U.S. Soccer, to support and advance the NWSL’s goals and initiatives.

Experience: Most recently served as the Director of Women’s Soccer at the Swiss soccer federation (SFA). Previously spent more than 18 years at FIFA, where she her roles included deputy director and head of women’s competition and overseeing all aspects of the FIFA Women’s World Cup. She began her sports business career at UEFA on women's side. Served as coach and president of FC Zurich Frauen.

The job: Oversee the NWSL’s player affairs and operations including the negotiation and administration of all player rosters and contracts, disciplinary process, and game and medical operations. Responsible for all legal matters, including expansion, team acquisition and investment, governance, compliance, intellectual property, commercial transactions, investigations and litigation.

Experience:  Arrived from the law firm ArentFox Schiff LLP, where he was a partner. Prior to his time at the firm, Ordower spent 23 years at Major League Soccer and Soccer United Marketing in various capacities including operations, player personnel, legal and business. He most recently served as MLS’s Executive Vice President of Business Ventures spearheading the league’s sports betting strategy and prior to that served as the league’s General Counsel.

Personal: A St. Louis, Missouri native, graduated from Boston University with a degree in English and earned his law degree from George Washington University Law School. resides in New Jersey with his wife, three children and three dogs.