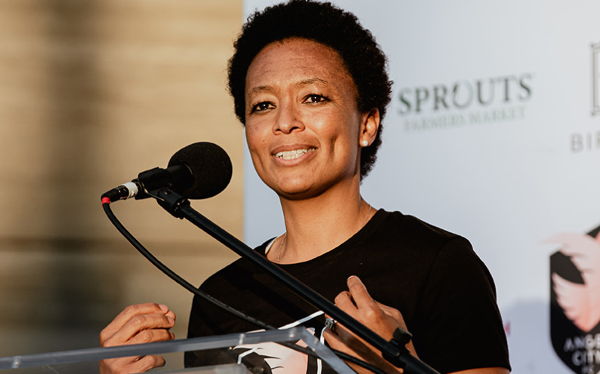 Investing in Angel City FC was a no-brainer for Angela Hucles Mangano.

When she heard that a group of prominent women – including her former U.S. teammates Julie Foudy and Mia Hamm – were raising capital for an NWSL team, the former World Cup and Olympic star was all in.

The Los Angeles club’s mission – to draw the diverse city together, and empower women on and off the field – resonated. Hucles Mangano had already served as president of the Women’s Sports Foundation, as a sports envoy for the U.S. Department of State, and as a U.S. Soccer board member.

Over the past two years, Hucles has done far more than write a check. She was named vice president of player development and operations. This month, she was promoted to general manager. In her new role overseeing strategic, technical, managerial and logistical aspects of ACFC, she’s one of the highest-ranking females in women’s professional soccer.

It’s a role she’s well suited for, and not only because of her gender. As ACFC reaches out to many different fans in America’s sprawling second largest city, she represents two other communities: Black, and LGBTQ+.

“I wear a lot of hats,” Hucles Mangano notes. “You rarely see someone like me in the sports world. But they all blend beautifully in this club. Angel City aligns with everything I stand for.”

In its first year of operation, the franchise – which currently sits seventh in the 12-team league standings, one spot below playoff qualification – has been a leader in community involvement. Pledging to build “the fiercest, most inclusive community in world football,” and beginning even before opening day, ACFC has provided 15,000 sports bras, delivered 10,500 pounds of fresh produce, coached 2,350 youth players, packed 2,000 essentials kits, donated 1,500 soccer balls, engaged with 66 community organizations, trained 23 coaches, refreshed eight school gardens, and funded four female entrepreneurs.

They’ve also signed countless autographs, served as role models for untold numbers of boys and girls, and introduced who knows how many people to the joy and beauty of soccer.

“Values and priorities are important,” Hucles Mangano says. “But so are intentionality, and actions. You have to back up what you say you’re going to do, and actually do it.”

Other teams have taken notice. Hucles says that after each home match, visiting players and coaches talk about the dynamic atmosphere at Banc of California Stadium.

“Our fans are on their feet for 90 minutes. They chant. They have drums. They identify with us,” she says. She is proud to see Los Angeles’ racial, ethnic, age and other types of diversity represented in the stands. 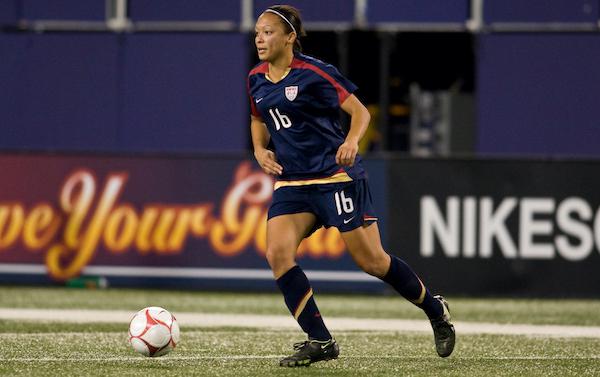 Among Angela Hucles 109 appearances for the USA included a two-goal performance in the USA's 4-2 semifinal victory en route to winning gold at the 2008 Olympics in China.

Hucles Mangano is aware that as a female, she brings “life experiences” that front office personnel on other men’s and women’s soccer teams do not have. But she says it’s important for backgrounds of all types to be represented in the places where decisions are made.

“The more perspectives you have, the better the outcomes. Different people ask different questions, and that leads to different processes.”

As a woman of color, Hucles Mangano is glad to see people like her represented on the full and youth national teams. However, she believes, the numbers “could be better. We need more opportunities at the youth levels, more exposure. We need coaches to be more intentional about where they recruit, and about making sure we keep kids in the sport.” That issue, she says, is both “top down and bottom up.”

In the whirlwind of the last two years, with a team founded and formed in the first months of the pandemic, and which took the field for the first time just five months ago, Hucles has risen rapidly. Her role has evolved, the club said in a statement announcing her new position. She is “a force across our organization, bringing her ‘whole athlete’ mentality to the sporting business, the front office, and our community. She is an incredible, inspiring athlete who pushes us to be better, go farther, and do more. She understands what our players and coaching staff need to be successful, and how we can make an authentic impact in our community.”

But for the former national team midfielder — she earned 109 caps and won two Olympic gold medals — the best part of the job is game day. Her competitive juices kick in. Angela Hucles Mangano may not compete on the field any more. But her mark on Angel City – and the City of Angels – is hard to miss.