LaLiga: Xavi calls for calm amid the latest Barca storm 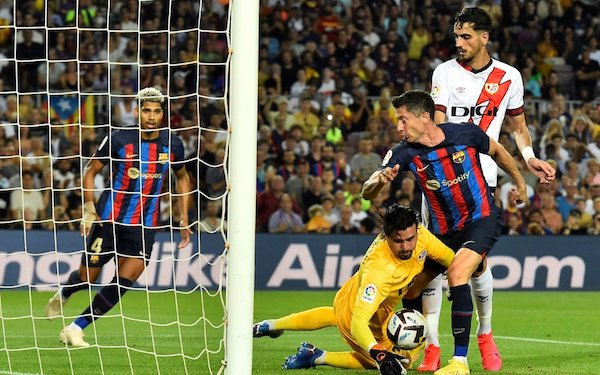 Barcelona coach Xavi Hernandez called for "patience" after his team's draw with Rayo Vallecano in their season opener, but he will know the team is expected to challenge for the La Liga title this season after a raft of high-profile signings.

Barca struggled in front of goal in the disappointing stalemate at the Camp Nou last weekend and faces a tricky trip to Real Sociedad on Sunday.

Robert Lewandowski, Raphinha and Andreas Christensen all made their debuts from the start against Rayo and Franck Kessie made his first competitive appearance for the club as a substitute.

Barcelona, which has struggled financially in the last two years, is also waiting to be able to register France defender Jules Kounde after his arrival from Sevilla.

But Xavi has called for calm from supporters as he looks to bed in the new players.

"I understand the disappointment, the expectations are really high," Xavi said after the Rayo game. "We will have to analyze the game, improve and continue to believe in the style of play. Rayo defended well. It was harder for us to create than usual. It's a shame because we wanted to show the fans that we are on the right track. It is disappointing, but we ask for patience and for people to believe in this team."

Xavi helped turn the Catalan giants' fortunes around last season, leading them to a second-placed finish after taking over with their top-four hopes in doubt.

Barca still ended 13 points adrift of champion Real Madrid, which started its title defense with a come-from-behind victory at Almeria.

Real trailed newly-promoted Almeria for much of their first match of the campaign until Lucas Vazquez's equalizer, before David Alaba came off the bench to score the winner with his first touch from a free-kick.

The most impressive performance from one of the title hopefuls came from Atletico Madrid.

Alvaro Morata scored twice in a comfortable 3-0 win at Getafe as Diego Simeone's team, which won the title in 2021, laid down an early marker.

The Spain striker, who spent the past two seasons on loan at Juventus, has been linked with a possible move away from the Estadio Metropolitano, with Manchester United reportedly interested.

"Everyone at the club hopes he continues," said Simeone. "He is working very well, in an extraordinary way. I think that all footballers need to have confidence to do important things. He came back with great humility and wanting to work."

Player to watch: Japan's Takefusa Kubo marked his debut for Real Sociedad with the only goal in the victory at Cadiz last week. The 21-year-old was signed from Real Madrid last month after loan spells at Real Mallorca, Villarreal and Getafe. Kubo will be hoping to impress on Sunday against Barcelona, where he featured as a youth player.

3: New Sevilla signing Tanguy Nianzou could become only the third player born in the 21st century to play in three of Europe's top five leagues, after Moise Kean and Ethan Ampadu.